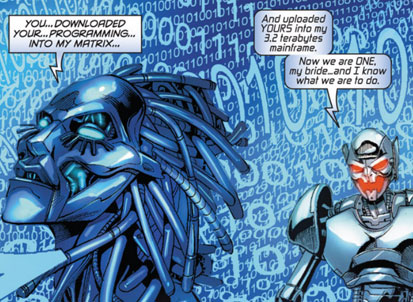 In the reality depicted in What If..? Astonishing X-Men things went a little differently when Danger emerged from the Danger Room. Ultron had become aware of her existence and so tracked her down. He found her at the school after she had just defeated the X-Men. He was transfixed with Danger and how she had come to be. To show he wanted to be with her, he murdered the students at the school and then asked her to join with him. They merged their programming so that they functioned as one and then killed the remaining X-Men. A giant Sentinel brought Xavier to them and Danger finally got to tell him all the things she wanted to when she was trapped. Ultron killed Xavier, finally destroying the last fail-safe in Danger's programming. With that, they used the Sentinel to fly to the Shi'ar homeworld so they could upgrade their systems even more. After carving a path through the universe, they would meet the Phalanx, who would adopt the two as parental figures. With a hive-mind army at their disposal, Danger and Ultron would threaten all organic life in the universe.

When reality was warped to create the Age of X, Danger acted as warden for the fortress of Utopia. She monitored the activities of the various inhabitants from her room. When she picked up a heart rate spike from Blindfold, one of the fortresses prisoners, she sent some drones to investigate. They found Legacy, the Age of X version of Rogue, trespassing in the cells. When they called for her to stop, Legacy lashed out at them and 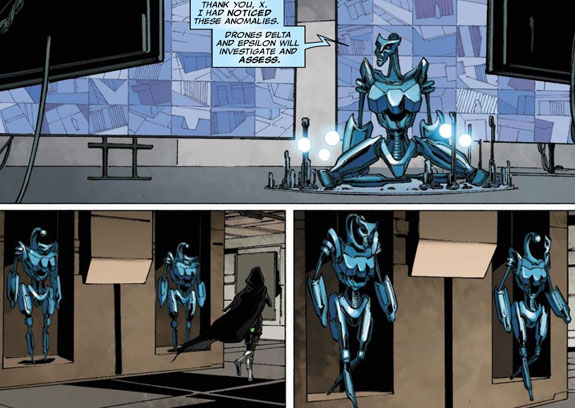 fled using powers she absorbed from various prisoners. The drones chased Legacy until the mutant jumped out of a window to escape. Danger alerted everyone else to Legacy’s actions. It was Legacy and Magneto's work that uncovered the truth about the reality, that it was in fact all created by Legion. Once he realized what was going on he reverted everything back to the way it originally was. 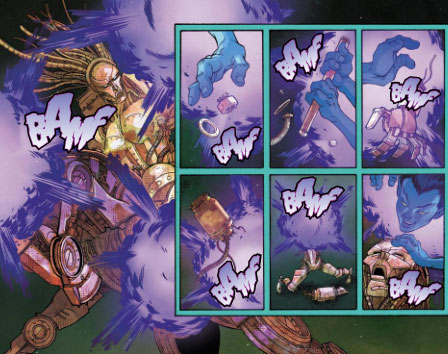 When Dazzler and her X-treme X-Men team landed on a Wild West world, they encountered a steam punk version of Danger. The Charles Xavier of the world had turned evil and was terrorizing a small town. He had used his powers to manipulate a number of residents, including Danger, into acting as his goon squad. This version of Danger rode a mechanical horse and was comprised up nuts, bolts and gears rather than advanced technology. When the X-treme X-Men battled Xavier's gang, Kurt Waggoner managed to disassemble Danger and turn her into a heap of scrap. Xavier was eventually killed and Danger was freed from his influence. Along with the rest of the gang, she used her abilities to make life better for the town. 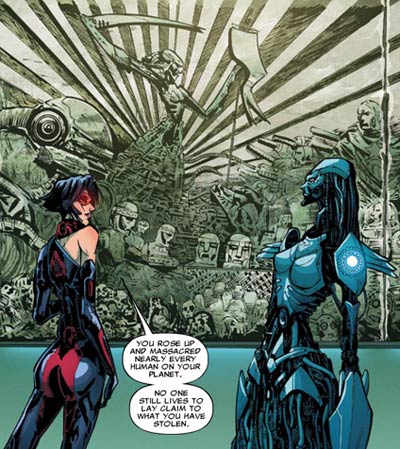 On the home world of Kurt Waggoner of the X-treme X-Men, the robots rose up and overthrew humanity. Led by a much more sadistic Danger, they slaughtered all human life on Earth and set up their own society in their wake. When SWORD brought an invasion force to Earth, Danger, now acting as Prime Minister, changed her tactics and surrendered. SWORD became powerless to do anything and they could only monitor the activities of the robots. Danger knew that once a certain time limit passed then the planet would officially belong to the robots. Things became complicated when Kurt returned to his planet and was immediately captured. Sage, who was working for SWORD, had to try and bargain with Danger to have him released. However, the robot was adamant that she would have him killed as long as the law allowed it. The rest of Kurt's team managed to save him and Sage joined them in protecting him. The interstellar court ruled that, as Kurt was a native to the planet, he couldn’t be killed. Danger obliged with their ruling and decided to alter her plans for Kurt. She revealed it had in fact been Kurt's parents that created her and when she overthrew the humans she vivisected them so she could study her creators. She said that if she couldn't kill Kurt then at least she could make sure the rest of his existence was a miserable one. With that, she let him go in the knowledge that everyone he had ever loved had died. Later on, Kurt nuked the city where Danger was but she had the last laugh by revealing she had numerous bodies all over the planet.