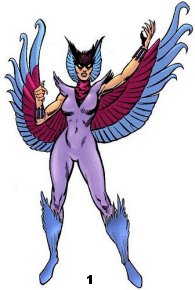 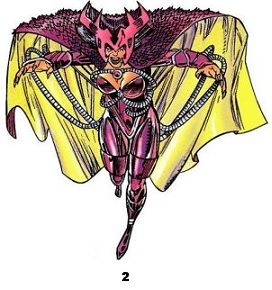 1) When Deathbird first fought Ms Marvel she wore a lavender and pale blue sleeveless bodysuit that had feather-like extensions at the shoulders and legs. She wore a purple mask that covered half of her face and bracelets that could shoot small darts from them. She also carried around a javelin to fight with. [Ms. Marvel (1st series) #9]

2) When she took the Shi’ar throne Deathbird began to dress in a more regal manner. She wore a dark purple armoured bodysuit that had numerous silver metal pipes coming out of it. As well as that she wore an elaborate pink headdress and a dark purple cape that appeared to be made of feathers. In addition she carried around a six-foot spear to accompany her deadly claws.  [Uncanny X-Men (1st series) #274] 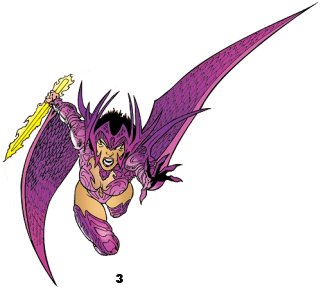 3) After being augmented by Apocalypse into being his Horseman of War Deathbird kept elements of her previous costume but it now showed a lot more flesh. Whilst her arms were covered her torso and legs were only partially covered with purple armour. She still had her signature headdress and cape, although both looked more elaborate than before. [Cable (2nd series) #74]

- After being freed from prison by Vulcan Deathbird reverted back to the very first costume she wore.

4) After marrying Vulcan, Deathbird adopted a more armoured costume again. Looking very similar to her first armoured look she streamlined it by removing much of the silver piping. She also added protection over her wings to stop them being damaged in a fight. [X-Men: Kingbreaker #1]

- When Deathbird was found floating outside the Peak station she was wearing yet a slightly modified version of her first armoured look, only without the cape.