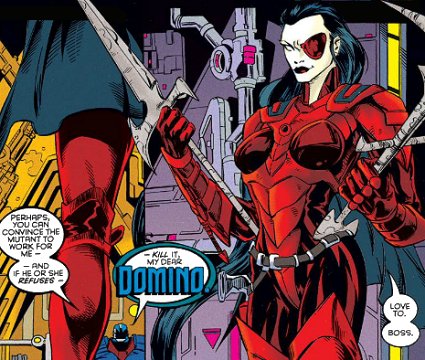 During the Age of Apocalypse, Domino was one of Apocalypse’s top assassins and things had a nasty habit for falling into place for her and to the detriment of others. Apocalypse dispatched Domino to hire or kill a powerful telepath detected by the Shadow King in the American Midwest. With her teammates, Grizzly and Caliban, Domino located the travelling theatre troupe of Forge and his adopted son, the powerful Nate Grey. Domino and her comrades killed several of Nate’s friends while trying to get to him, until Nate furiously unleashed his telepathic power on her. Domino’s mind was stripped bare as Nate forced her to experience all the death and pain she had caused others, leaving her nothing but a blank slate. 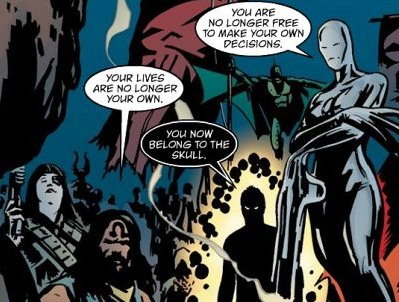 During Earth X, Domino and several other members of X-Force were compelled to join the Skull’s army in California. Without a will of their own, they marched on New York City, fighting Captain America and other heroes along the way. Although she had aged and gained considerable weight over the years, Domino apparently still retained her skills. She survived the final fight in New York, and was freed from the Skull’s control when Captain America killed him. 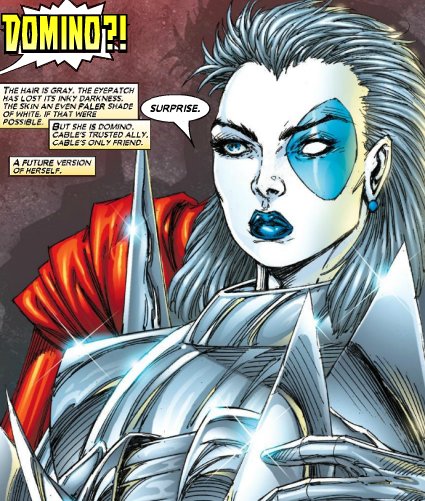 While facing the threat of Skornn, Cable and X-Force were confronted by a dimension-travelling version of Stryfe and a revamped Mutant Liberation Front. Surprisingly, Stryfe was NOT a version of Cable or his clone, but actually a future incarnation of Domino. A holographic masking field and imposing armor inherited from her own Cable completed the illusion. This version of Cable was shocked to learn Stryfe's true identity as he believed the Domino of this timeline to have been killed. Although coy about the details, this Domino was apparently from a future where Cable died and failed in battle with the Skornn. She returned to the past to mold history into a better future, just as Nathan originally did.

Ten to fifteen years in the future depicted in X-Men: The End, Domino was the leader of the X-Force team which included Warpath, Domino, Shatterstar, Feral and Rictor. The team responded to a major crisis involving a well-coordinated attack by the X-Men's greatest foes. When they 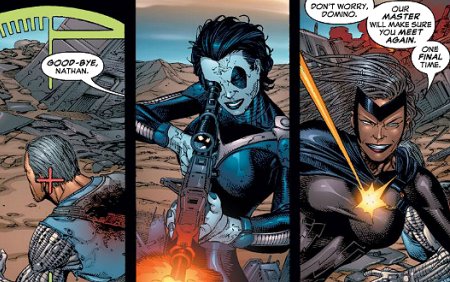 arrived, their aircraft  was shot out of the sky and X-Force barely survived. They teamed with Cable, only to have half the team co-opted by the techo-organic being called Technarx. Seeing her former lover absorbed into Technarx's collective consciousnesss, Domino tried to kill Cable. Her attempt was thwarted. Her luck ran out and she was killed when she encountered a Warskrull who had taken Wolverine's form.

In the version of the Days of Future past timeline referred to as Days of Future Now, Domino was still part of X-Force some 29 years in the future. This iteration of the team was led by Banshee and had fallen out with Wolverine's team of X-Men which included Cable. Along with the X-Men, X-Factor, Excelsior, Brotherhood, Acolytes and others, Domino and X-Force gathered in Madison Square Garden to witness the return of Magneto. He orchestrated a united front among all the remaining mutant factions to oppose the Sentinel regime controlling America.

Within a year, however, their numbers dwindled dramatically and even Magneto was captured and executed publicly. Domino and the other remaining mutants created a desperate plan to re-enact the original Days of Future Past time-jump. They learned that Master Mold was keeping Rachel Summers alive in Room X, and staged an assault on the old Weapon X facility to save her and revisit the past, in the hopes of changing it. Tragically, the assault was a suicide run for most of the mutants and Domino was apparently among the casualties. 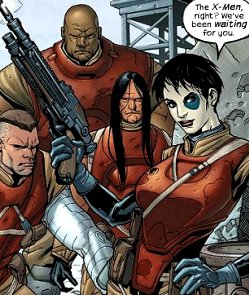 An alternate future version of Domino was a member of the Six Pack that visited the Ultimate universe. Working with Cable, the Six Pack (which also included Grizzly, Kane and Hammer) traveled back in time in an effort to kill Professor Xavier, all as a plot to prevent future events. They were opposed by the time-traveller Bishop who had come to save Xavier. The team of mercenaries clashed with Bishop and the X-Men and fought them to a standstill. When Hammer was gravely wounded, Domino and the others fled to their own future believing that the battle wasn't worth what Cable had paid them. Despite the Six Pack's departure, Cable was successful in his mission and killed Xavier.

As a resident of Utopia, Domino was caught up in the Age of X reality warp along with the other X-Men. She was part of the army of mutants defending Fortress X from human invasion over the 1,000 day siege. Little was revealed about Domino in this temporary reality crafted by one of Legion's personalities. When Legacy (that reality's version of Rogue) discovered Kitty Pryde’s camera and went on the run from Magneto, she encountered and disabled Domino during her escape, borrowing some luck for the endeavor.