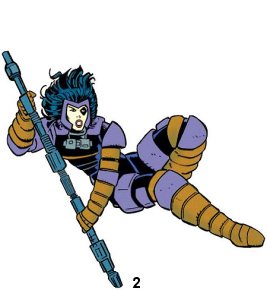 1) When “Domino” first appeared as den mother to the New Mutants and X-Force, it was actually Copycat in disguise. Flashbacks to Domino’s time with the Wild / Six Pack, however, showed her wearing similar outfits. Her gear included a midnight blue bodysuit with a solid white cutout along the inside of her legs. She wore additional equipment in the form of wristbands, epaulets, headframe and belt of pouches, all colored purple. [New Mutants (1st series) #98]

2) During her Six Pack days, Domino occasionally favored an armored costume for additional protection. It included a basic black body suit covered with purple armor plating and padding to absorb and deflect impact. She wore her standard headframe as well and typically favored the use of a ranged battle staff in combat. [Cable: Blood & Metal #1]

3) Back in action as herself, Domino wore a similar costume to the one Vanessa wore while disguised as her. She wore a midnight blue body stocking that covered her from the neck down, with ovals cut into the sides running up her legs, body and sleeves. Domino also wore knee high boots, a purple headframe and a variety of purple straps, pouches and holsters around her chest and belt. After she joined X-Force, this uniform occasionally sported ‘X’ emblems on the belt or chest. [X-Force (1st series) #22] 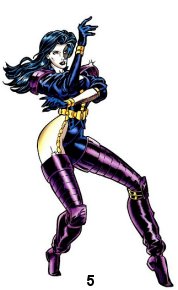 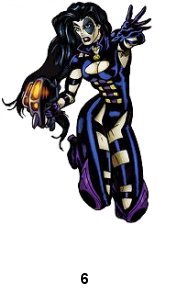 4) Following the Age of Apocalypse, X-Force adopted a new set of matching costumes, Domino included. Her costume was a sleeveless blue bodysuit with an open-necked collar. It had an ‘X’ emblem on the zipper in the front. She wore long purple gloves and boots, and a purple pouched belt with an ‘X’ belt buckle. [X-Force (1st series) #44]

5) Around the same time, Domino also adopted a secondary costume. Another dark blue bodysuit, this asymmetrical costume sported an open high collar with a chest window and ‘X’ button at the clavicle, purple epaulets, billowy short sleeves and a bare right leg and left forearm. She also wore thigh-high purple boots, dark blue gloves with gold braces, and a golden belt with gold lining tracing down her legs and up to her chest. [Cable (1st series) #25]

6) Domino also wore a third uniform during this period, a complicated swimsuit-like costume made of midnight blue fabric. Like the previous costume, this suit had a high collar and small ‘X’ over her exposed chest. She technically wore long sleeves and leggings, but they had several large rectangles cut out of her inner arms and thighs, exposing a good deal of skin. Domino had four purple straps across her abs, held by gold bracers. She also wore high purple boots, a purple choker and a purple facial tattoo on the right side. [Cable (1st series) #38]

7) On a mission to rescue her former lover Milo Thurman, Domino wore a significantly different outfit. This consisted of a black long-sleeved top which was cropped at the midriff. This had a red X symbol on one shoulder and a tight-fitting hood that she could tuck her hair into. She also wore form-fitting, black and purple shorts. Purple gauntlets covered her forearms and a she wore a matching bracer on one arm. This look included a purple satchel and gun holster and short black boots. [Domino (1st series) #1] 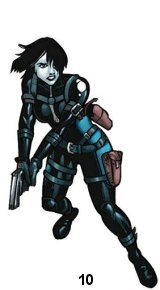 8) Following her return to X-Force, Domino adopted a midnight blue body suit covering her from the neck down. It had a purple collar and zipper line down the front. She also wore purple gauntlets, boots and a belt. Domino occasionally wore a matching midnight blue jacket over this costume. [X-Force (1st series) #82]

-) When she accompanied Wisdom's X-Force team on their shadow ops missions, Domino wore a plain black body suit, adorned with a red ‘X’ on her left side. She also wore long white opera gloves and a pouch belt with an ‘X’ buckle. [X-Force (1st series) #113]

9) While hunting for her mother, Domino adopted a sleeveless blue-black suit, with a V-neck cut and wire mesh over her chest and neck. She also wore protective bands around her wrists and heavy color-coordinated boots. Domino employed a set of goggles with different modes including night vision, illuminating infrared tripwires and spectrographic scans allowing her to see fingerprint smudges on a keypad. [Domino (2nd series) #1]

10) Back with the Six Pack, Domino adopted a black bodysuit that covered her from the neck down, and included blue stripes running up the outside of her costume from the calves to the inner arm. Designed as an active mercenary outfit, this costume included multiple straps and pouches to carry a variety of items in the field. [Cable & Deadpool #7]

11) During the superhuman Civil War, Domino sported a simpler look. She wore a simple navy sleeveless top with white trim at the arms. Her matching blue pants were similar to those she originally wore, with a white panel down the center and along the inner thighs. This outfit was completed by white boots, belts and straps and blue and white cuffs. [Civil War: X-Men #1]

12) Since joining Wolverine's X-Force team, Domino has been sporting a variety of black bodysuits that cover her entire body. These range from simple bodysuits to some with a hint of body armor. These can be unzipped down the front. As with many of her outfits, Domino adds gear and accessories appropriate to each mission. This includes holsters, straps, elbow and knee pads and belts with various pouches. [X-Force (3rd series) #8]