Towards the end of the Cold War, the entity known as Doop was built in a lab as part of a U.S. military experiment known as the Doop Project. Nothing is known about the project’s purpose but it’s been implied that Doop was influential in the fall of the Berlin Wall and the eventual collapse of the Soviet Union. Whatever Doop’s relationship with the US government, he was evidently discharged from duty and granted autonomy, possibly even citizenship.

Doop’s activities in the decades between the time of his creation and his employment in the media-savvy team called X-Force have yet to be depicted, though some hints of this past has been made. In addition to befriending Wolverine at some point, it seems Doop had an affair with a married woman. Their relationship ended when Doop ran off with the private detective who had been hired by the errant wife's husband. All along the way, Doop seems to have easily obtained friends and employment, despite his odd appearance and his tendency to speak only in his own gibberish language, which the people he worked with on a regular basis have been trained to understand. [X-Statix #21, X-Force (1st series) #120, I (Heart) Marvel: My Mutant Heart #1] 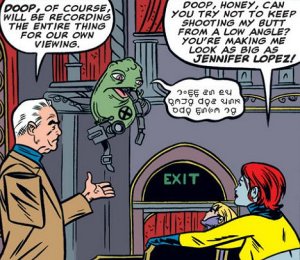 Decades later, Doop joined X-Force as their cameraman and was charged with capturing the events of the team’s missions as well as behind-the-scenes footage. As the team’s primary purpose was financial gain, rather than adventure or general heroics, the videos Doop recorded were the team’s major source of income next to merchandising. To that end, Doop was never active in field missions, always staying behind the camera. Nevertheless, Doop was still considered part of the team and gained a huge fan following.

Along with U-Go Girl and the Anarchist, Doop was one of only three team members to survive when a mission to save the band Boys 'R' Us 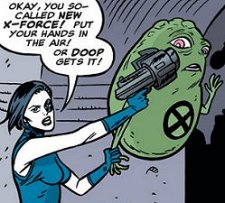 turned into a massacre. At a press conference to introduce the new team roster following this tragedy, the original X-Force team attacked the group that had publicly adopted their name. When Doop was held at gunpoint by Domino, Mister Sensitive, who had just been announced as the new team leader, subdued her and saved Doop, earning his respect. [X-Force (1st series) #116-117]

During an interview with Wolverine for a segment titled "Doop's Eye View of the New X-Force Team’s First Year", Doop gave Wolverine a tape to look after and asked him to keep an eye on his new teammates. X-Force's manager, The Coach, wanted to get rid of both U-Go Girl and Mister Sensitive and attempted to have them killed. Luckily for them, Wolverine intervened and handed Mister Sensitive the tape, telling him that someone was looking out for him. The tape had footage showing that the massacre on the Boys R Us mission was planned by The Coach. [X-Force (1st series) #120] 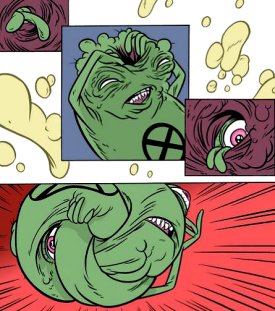 Aside his from personal history, Doop’s very physiology was a mystery as well. On one occasion, Doop popped what can only be described as a pimple on his forehead, the result of which created a vortex that sucked the entire X-Force team inside Doop’s head. Doop panicked and followed by reaching into the hole left by the pimple and turning himself inside out. Inside his own dark imagination, Doop rescued each team member from horrors based on their own fears before rushing back through the hole in his forehead. Doop squeezed the pimple once more and the team reappeared in their quarters, unaware that anything had actually taken place. [X-Force (1st series) #123]

Doop seemed to keep such abilities to himself, such as his apparent immunity to Lacuna’s time-stopping powers. Whatever the source of his incredible abilities, it seems that he required regular and expensive medical treatments. [X-Force (1st series) #122, X-Statix #16]

Following the death of U-Go Girl, the team’s financial backers decided to change the name of the team to X-Statix in honor of U-Go Girl, who had suggested it. The team announced this change at the opening of Doop's children’s hospital.

Due to the team’s high mortality rate, X-Statix regularly recruited new members and, on at least one occasion, held try-outs for new members. When one applicant called Corkscrew seemed overenthusiastic in killing a rival and was believed to suffer from "Code-X," a relatively unknown malady which causes mutants to become violently psychotic, Doop was asked to deal with it. Doop took Corkscrew on a camping trip, where Doop ultimately killed and buried the mentally-unstable mutant, but not before subjecting him to a series of sadistic, psychological traumas. [X-Force (1st series) #129, X-Statix #1]

Doop and Wolverine worked together to find the mythical Pink Lady, who had been mistakenly accused of stealing the Pink Mink, a fur which causes mania in mutants. Wolverine and Doop were affected by the Pink Mink’s power and made to believe that the other had "Code-X." Both were upset that they might have to kill their old friend. However, after realizing the mistake, the old friends found that the Pink Lady and the Pink Mink had been kidnapped by Hunter Joe.  Wolverine 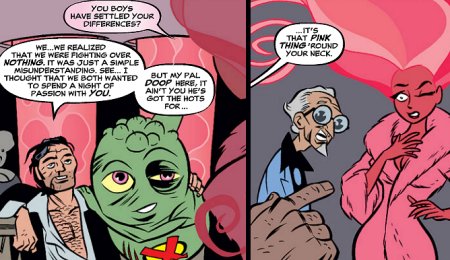 and Doop were captured by Hunter Joe, who intended to mount their heads on his wall. Luckily, they were rescued by the Pink Psychos, hundreds of low-level mutants that had been affected by the Pink Mink's mania. Freeing themselves and the Pink Lady, the group made their escape. Romantic tensions began to rise when both Wolverine and Doop seemed to be simultaneously drawn to the Pink Lady, which resulted in the two friends fighting each other again for her affections. However, they soon realized that they had different romantic interests - Wolverine was attracted to the Pink Lady, while Doop was interested in the Pink Mink. After a night of passion, they discovered that the Pink Mink reproduced asexually, allowing the Pink Lady to be free. At the conclusion of this latest adventure, Doop raised a glass to a new addition to his den - the mounted head of Hunter Joe. [Wolverine/Doop #1-2] 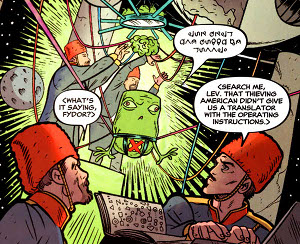 On a visit to Russia, Doop was kidnapped by Russian terrorists who acquired classified documents from a scientist involved in the Doop Project. They removed Doop's brain and turned it into a powerful weapon. X-Statix grudgingly enlisted the aid of the Avengers and together they defeated the terrorists. Unfortunately, during the rescue mission, Thor's hammer became stuck in Doop's brain. Upon removing it, the brain exploded, shattering into six pieces and scattering across the globe. Although Doop had a back-up brain located in his butt, allowing him to continue to function, it only had sufficient power to keep Doop alive for three days. Immediately, X-Statix set about to recover the pieces of Doop’s brain, only to find themselves competing with the Avengers, who did not trust X-Statix with the awesome power of Doop.

In the city of Asgard, Thor and Doop came to blows over the last piece of Doop’s brain. Their thunderous battle attracted the attention of three Valkyries, who woke from their slumber to begin a new wave of slaughter. Luckily, the arrival of the Avengers and X-Statix convinced the Asgardian women to return to their sleep. With the crisis over, the two teams were preparing to fight when Doop’s back-up brain ran out of power. Reluctantly, Mister Sensitive agreed to turn Doop over to the Avengers, if they allowed him to reinsert their pieces. This act of selflessness was enough for Captain America to believe that X-Statix were not the irresponsible media hounds he believed them to be. Cap decided to allow Doop to stay with them. [X-Statix #21-25] 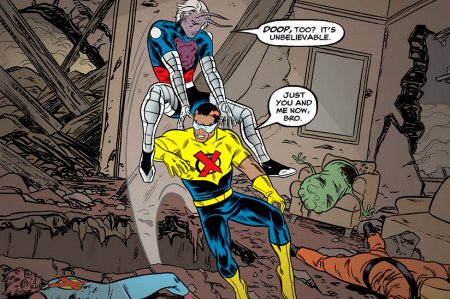 After their encounter with the Avengers, the team decided that, after one final mission, they would disband. During this final mission, which had eerie similarities to the Boys ‘R’ Us massacre, the entire team was killed, including Doop who was seen sprawled on a chair with a large stomach wound. [X-Statix #26]

Several months later, a Doop-like entity landed in Costa Rica from space. The entity was found by Polaris, who seemed to recognize it and was able to communicate with the creature, whom she called Daap. Havok, who was with Polaris at the time, believed something untoward was going on and used his powers to blast it into pieces. The pieces reformed into its original Doop-like shape. For unknown reasons, it then sucked Polaris and the mutant-hating Leper Queen into its body. As it flew away, the creature appeared to be destroyed by Apocalypse, who then transported Polaris and the Leper Queen into his ship. It is unknown whether this entity was actually Doop, as it is possible that Polaris misunderstood its language. [X-Men (2nd series) #180-181] 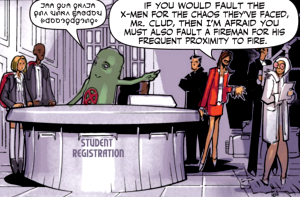 Despite his apparent death (and/or subsequent explosion), Doop soon resurfaced. When the X-Men relocated to the island of Utopia, Doop had a dream in which he was brought in as the island nation’s head of criminal investigations. [Nation-X #4] When the ideological schism later occurred and the X-Men family split, Doop decided to follow his long-time friend Wolverine to help form the Jean Grey School for Higher Learning. At the School, Doop acts as administrative assistant and as a teacher when the faculty is called into battle and unable to teach their students. [Wolverine & the X-Men #1, 4]