click on an image to view a larger version 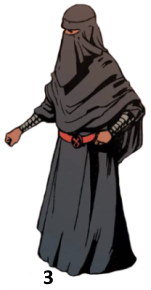 1) Dust’s original look wasn’t exactly a costume, but rather it was part of the religious garments she wore to adhere to Islamic hijab tradition. Whilst often called a burka both in and outside of the comics, this is inaccurate as she actually wears a black abaya with a niqāb over her face. Dust wore this when she first met the X-Men, but opted to use it as her training uniform with the Hellions, rather than the team's red and silver costumes. [New X-Men (1st series) #133]

2) As part of the Young X-Men, Dust very briefly altered her look to fit in with the rest of the team. She added yellow stripes down the center of her abaya, which contained a large X at the waist, as well as yellow boots. Later on, she added a yellow sash around her waist too. This version didn’t last long, as she reverted to her original look soon after, although she occasionally wore the sash still. [Young X-Men #7]

3) When Sooraya met up with the Champions, she kept her first look but added a red belt/sash around the waist that had a black X in the center. Unlike previous looks, she added silver bands around her forearms too. [Champions (3rd series) #3]