The Handsome One, "Sleepy Head"

• Symbiotic link to his
skateboard, tying his physical
health to its proximity and giving
it a quasi-independent consciousness,
able to levitate and direct the skateboard
from a distance or use it for high-speed
transport and flight 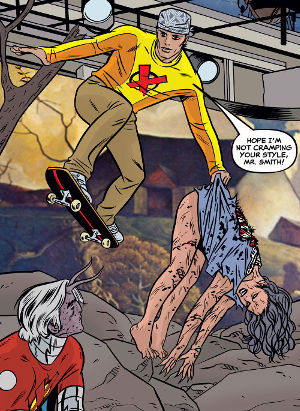 Robbie Rodriguez was a good-looking mutant who had a symbiotic relationship with his sentient, superpowered, flying skateboard. Robbie used to hang around at Venice Beach, California, impressing crowds with his skateboard stunts. One day, he was spotted by a film director, who decided to cast him in his new movie, a fictionalized account of the adventures of the popular mutant superhero team X-Statix. Rather than portraying someone else, the director wanted Robbie to play himself, having already been urged by his investors to include a Latino presence. X-Statix were introduced to Robbie, or rather El Guapo (“The Handsome One”) as his codename was decided to be, when they visited the set of X-Statix: the Movie. Taking a break from filming, the cast, along with Mister Sensitive, were attacked by Sharon Ginsberg, who sought revenge against the team for amputating her wings. Robbie’s mutant abilities came in handy and he effortlessly defeated Sharon, rescuing Mister Sensitive from her wrath. [X-Statix #9]

El Guapo’s heroics were captured on film, which was also a testament to Robbie’s photogenic looks. Despite some resistance from certain members of X-Statix, particularly from Mister Sensitive who had lost face when El Guapo rescued him, it was decided that he was to be invited into the group. The PR department of X-Statix believed Robbie’s youth and good looks would give a fresh face to the team and would appeal to the adolescent market. They also wisely assumed that his handsomeness would generate tension within the group, making for more drama and thus higher ratings. Nevertheless, the team leader, Anarchist, wanted to first test Robbie’s skills on the field. With that in mind, Spike Freeman, X-Statix’s owner, announced he would arrange a relatively easy battle against the Malaysian military forces.

During a pool party, where even guest Wolverine was compelled to admire Robbie’s good looks, the team officially asked him to join and, on the spot, invited him to immediately follow them to the mission in Malaysia. After some initial hesitation, in light of the fact he hadn’t even been formally trained yet, El Guapo tagged along. In Malaysia, fellow X-Statix member, Vivisector, who was obviously attracted to him, abandoned his combat position when El Guapo was slightly injured in the knee. This was much to chagrin of the Anarchist, who was dismissive of Robbie, even warning him not to get in the way. For his part, the oblivious El Guapo was puzzled by the Anarchist’s attitude. 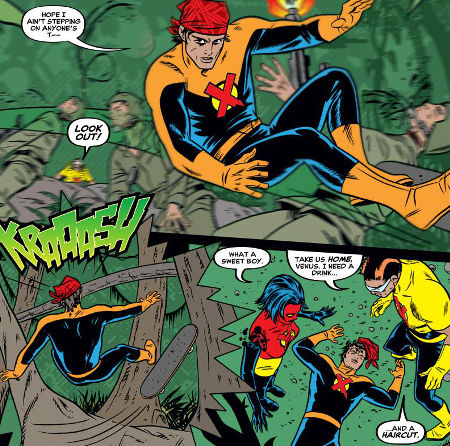 At the same time, he was impressed by X-Statix’s fearlessness and their fighting skills, particularly after having seen them consume vast quantities of alcohol during the party. While still recuperating, he was filmed by his ubiquitous teammate Doop, who incessantly recorded the team’s activities with a camera. In his attempt to look good for the camera, El Guapo put aside his fears and joined the battle. Unfortunately, he only succeeded in accidentally scalping the Anarchist, before ending up headfirst into a tree and being knocked out. 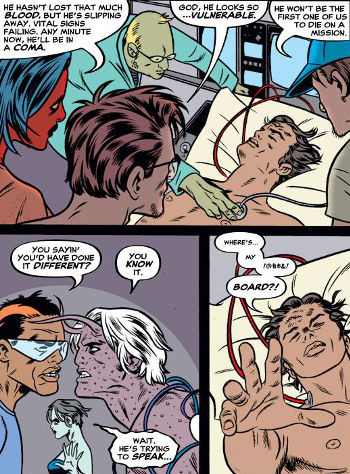 Back in X-Statix’s headquarters in Santa Monica, El Guapo remained unconscious. He had only minor injuries, but his vital signs were failing and he was close to slipping into a coma. Anarchist and Mister Sensitive quarreled over the fact that El Guapo had been allowed to participate in the mission in the first place, given his total inexperience. Just then, Robbie was able to briefly regain consciousness and asked for his skateboard that had been left behind in Malaysia. Afraid that X-Statix would deny membership to him, he hadn’t disclosed to them the fact that he couldn’t be separated from his skateboard for long before he would begin getting sick on account of their symbiotic bond.

After reuniting with his skateboard and fully recovering, Robbie sat down with the team to discuss his prospects. Freeman assured him he was still wanted in the team, provided his symbiotic relationship with his skateboard was kept a secret from X-Statix’s enemies. Now, El Guapo had to decide for himself if he wanted to jump in and become a full member, keeping in mind the very high mortality rate among X-Statix members. Both Venus Dee Milo and Vivisector were eager to have him in the team, making their respective lovers, Mister Sensitive and Phat, jealous. Vivisector was indeed smitten with him but after an argument with Phat he realized it would be sheer foolishness to fall for a heterosexual man.

Already a bilingual, fluent in English and Spanish, El Guapo was taught DoopSpeak by Doop and spent the next few weeks training intensively. Freeman encouraged him to indulge in the hard partying/socializing lifestyle typical of the other X-Statix members. Robbie was even offered pills which could instantly make him sober and ready for a mission after a bout of heavy drinking. At 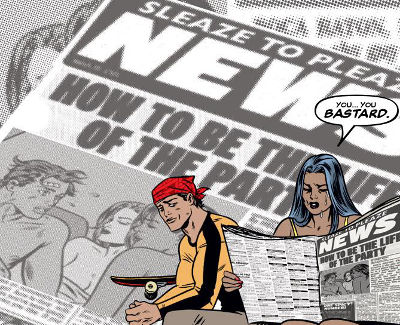 the same time, he had to overcome the temptation of constantly having beautiful women around him. He vowed to remain faithful to Consuela, even though Freeman was trying to subtly influence him to break up. After resisting for a couple of weeks, Robbie finally gave in and had a threesome with two models who also used to have threesomes with Zeitgeist, a deceased member of the team. Robbie hoped Consuela wouldn’t find out about his little adventure. However, Doop had filmed everything and Robbie soon found himself on the front pages of tabloids, complete with photos of himself in bed with the two models. Heartbroken, Consuela broke up with him. Enraged, El Guapo attacked Doop in public in retaliation.

Later, at X-Statix’s headquarters, El Guapo was beaten up by his sentient skateboard, who had always liked Consuela and was furious with Robbie for driving her away. Priding in himself for his good looks, Robbie begged not to be hit in the face. [X-Statix #11]

Now a full member of the team, El Guapo pulled his weight in difficult battles, including one in the India/Pakistan border. [X-Statix #12] However, his newfound stardom was in peril after the recently resurrected, world-famous pop star Henrietta Hunter was recruited into X-Statix in an attempt to generate publicity. Subsequently, Henrietta was publicly abducted by the team known as Euro-Trash, in what was yet another ploy engineered by Freeman, who intended to have her assassinated. El Guapo wouldn’t lift his finger to help her, admitting he would happily see her butchered. Henrietta was stealing his thunder at a time when everyone was supposed to be talking about him, the newest X-Statix recruit. Vivisector suggested he come out as gay as a publicity stunt and Robbie seemed to give the idea some thought. 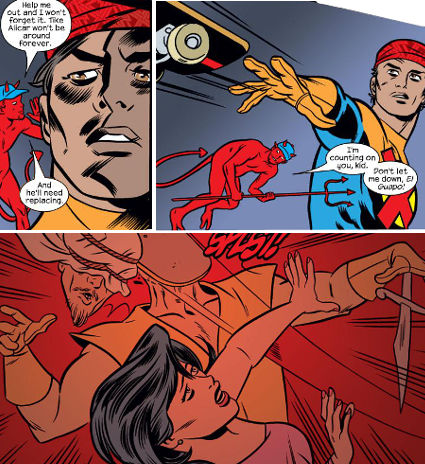 After Freeman’s machinations came to light, X-Statix asked El Guapo to tie him up to a chair before going up against Euro-Trash to rescue Henrietta. Left alone with Robbie, Freeman had a proposition for him: he asked him to assassinate Henrietta but make it look like an accident in the heat of the battle. After struggling with his conscience, El Guapo eventually opted for rescuing rather than killing Henrietta, instead using his skateboard to decapitate one of her captors, Blind Ali. [X-Statix #13-14]

Despite rescuing Henrietta, X-Statix plotted to kill her as soon as they began to realize how tremendously popular she was, eclipsing everybody else on the team. Eventually, instead of killing 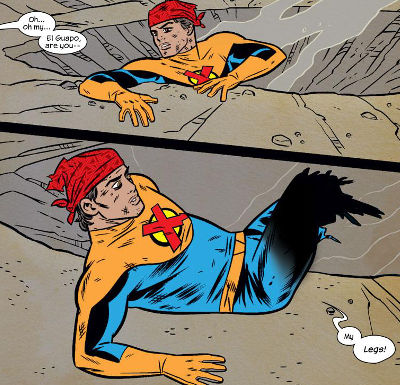 her, they brought Henrietta along on a deadly mission in Afghanistan fighting against the Taliban. Much to their surprise, Henrietta proved to be an excellent fighter. At some point, Phat actively intervened to save Henrietta from a missile. The stray missile hit El Guapo instead, blowing off both his legs. Back in Santa Monica, Phat and Vivisector had a fight over the fact Phat had rescued Henrietta instead of El Guapo. The still infatuated Vivisector was heartbroken that Robbie’s physical perfection, the cornerstone of his being, had been shattered. Dead Girl was unfazed, however, as she had never come to accept El Guapo as “one of them.” [X-Statix #15] 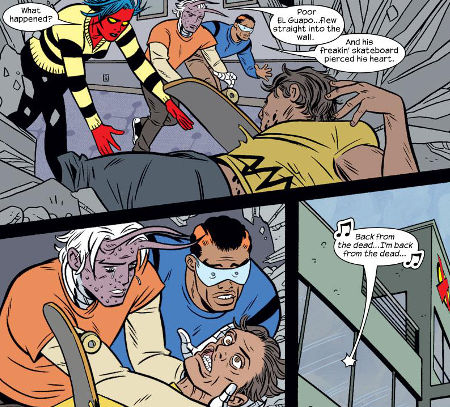 Now an amputee, Robbie was dismissed from the team’s next mission against Mister Code, although he had no trouble getting around on his flying skateboard. [X-Statix #16] Following Henrietta’s death in the battle against Mister Code, a series of inexplicable deaths began happening, linked to her posthumously released song “Back from the Dead.” The song was apparently cursed and whoever made the mistake of humming the lyrics died shortly afterwards, their faces contorted in a horrific grimace. El Guapo made the grave mistake of dismissing the rumors. When he hummed the words to Henrietta’s song, his skateboard went out of control and he flew into a wall, with the skateboard impaling his heart. Vivisector was the only X-Statix member who was visibly upset at his loss. [X-Statix #18]