• Cursed by Selene with a vampire-like affliction,
giving him immortality, inhuman strength,
endurance, reflexes, and resilience, the power
to transform into mist, and a second monstrous
visage with fangs he uses to feed off of other beings
• Bonded with the alien Technarch, enabling him to
produce the techno-organic virus to reanimate any
amount of recovered dead tissue into a fully-formed person, bound to his will and virtually impossible to kill 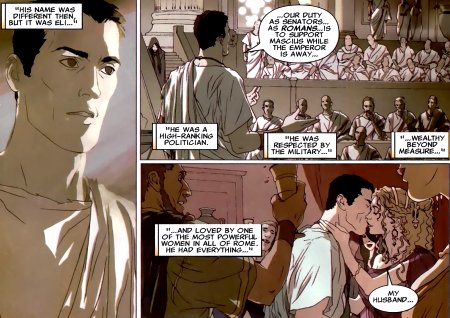 By far the oldest member of Selene’s Inner Circle, Eli Bard’s story begins over 2,000 years ago during the height of the Roman Empire. Once a valiant soldier, Eliphas’ military career ended after he was injured in battle. He struggled to earn a living despite his talents as a poet and an orator, but his fortunes changed when the destitute man was discovered by a powerful Roman woman named Aurelia. She married Eliphas and positioned him as her political puppet but in truth their marriage was a sham. Aurelia orchestrated Eliphas' election to the Roman Senate, where his charisma earned him popularity and respect from his fellow politicians. In time, Aurelia grew increasingly disappointed by Eliphas’ performance in the Senate, especially when his political actions adversely affected her true lover, the politician Mascius. [X-Force (3rd series) #11] 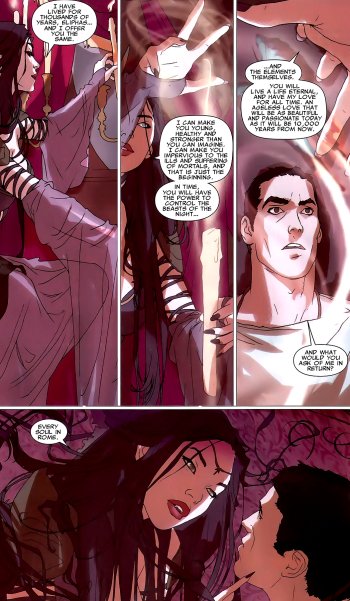 It was during this vulnerable period in his life that Eliphas was approached by another powerful woman who offered to share her strength—Selene. Claiming to have waited for Eliphas since long before his birth, Selene made Eliphas a deal: she would make him her immortal lover forever in exchange for his help in harvesting all the souls of Rome. Although discontent with his life and the fraudulence of his position, Eliphas intended to reject Selene’s wicked deal. As fortune would have it, Aurelia chose this moment to eject Eliphas from her home and their marriage and forcibly maneuvered Mascius into Eliphas’ Senate seat. With nothing left to lose, Eliphas accepted Selene’s offer, despite the objections of his conscience. [X-Force (3rd series) #11]

Eliphas received detailed instructions from Selene on how to prepare the spell, as well as the mystical weapon needed to complete it: a blade made from the bones of Selene’s long-dead mother. Still, his conscience nagged at him. When he met a young slave girl, he warned her to take her family and flee the city. Armed with this blade, Eliphas steeled his resolve and sneaked into the coliseum during a crowded event. Using blood drawn from his hand, he painted five dark sigils around the arena in a pentagram formation. Unfortunately for Eliphas, before he finished preparing the Roman souls for Selene’s consumption, he was intercepted by guards who had been alerted to his plot by the slave girl he had tried to spare. They arrested both Eliphas and Selene and prepared to burn them at the stake. Selene, however, was not ready to die. She deflected the flames, cursed Eliphas to live forever devoid of her love and fled, leaving him behind to burn. [X-Force (3rd series) #11]

And burn he did. Eliphas’s charred body was buried and remained so for 700 years. He finally emerged from the grave cursed with a form of vampirism. After feeding on the first person he saw and viciously murdering the descendants of Aurelia and Mascius, Eliphas began his journey after his beloved Selene.  In order to regain her favor, he intended to offer her the souls she needed to 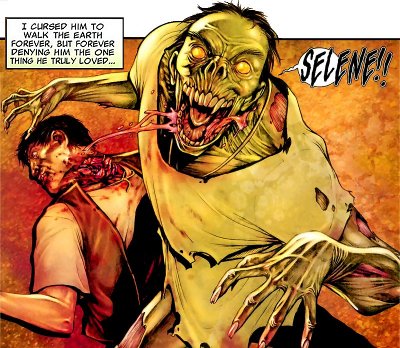 achieve godhood. This required the dark blade made from the bones of her mother. Eliphas incited a plague in Rome to cover his tracks while he searched for the blade, which he finally found in one of Rome’s protected vaults. [X-Force (3rd series) #11, X Necrosha: The Gathering]

Eliphas followed Selene’s trail to the New World. He encountered an Apache tribe in the American Southwest, whom he slaughtered because they recognized the evil within him. Their deaths were blamed on imported pathogens. He eventually tracked Selene to Nova Roma, the hidden Roman colony she founded in the Amazon rainforest. Without a suitable offering, however, Eliphas dared not approach her... yet. He sought out a worthy human sacrifice and finally found one in the Purifiers, whose souls were as decadent and corrupt as those he encountered in Rome. [X-Force (3rd series) #11, X Necrosha: The Gathering] 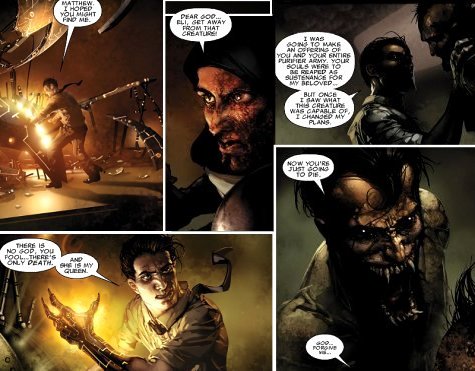 Once in the company of the Purifiers, Eliphas stumbled across something even more useful to him: the Techno-Organic Virus the Purifiers had harvested from the alien Technarch known as the Magus. Eliphas, now calling himself Eli Bard, absorbed the entirety of Magus into his body and betrayed the Purifiers. [X-Force (3rd series) #1-6]

Now in possession of a power that could raise the dead, Eli no longer needed the Purifiers as a sacrifice. He could resurrect anyone he wanted and present them to Selene as an offering. He decided on the Apache tribe he slaughtered when he first arrived in the Americas. As luck would have it, the X-Man Warpath, a descendant of this particular Apache tribe, had buried his mutant-tracking teammate Caliban at this burial site as well. Eli's desecration of these sacred grounds roused the protective spirits of the Apache. Eli battled these totems using the only weapon that could harm them: Selene’s mystic blade. After he plunged the blade into one of the spirits, it escaped and merged with its brethren into a twisted, demonic bear. Eli let it go and fled with his spoils. He returned later to retrieve the blade, only to discover it was now in Warpath’s possession. [X-Force (3rd series) #6-10, 22] 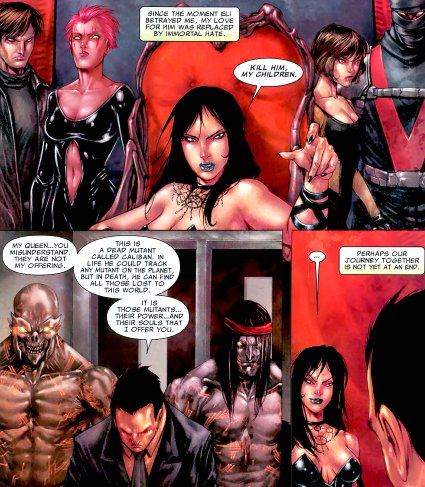 Nevertheless, Eli returned to Selene despite her threat to kill him if she ever saw him again. He presented his offerings: the resurrected Apache tribe, the Techno-Organic Virus through which he could resurrect dead mutant souls for her to consume and, most importantly, the mutant tracker Caliban who could find any dead mutant that Selene wanted. Selene accepted this offer and used Eliphas' services to create an undead mutant army. [X-Force (3rd series) #11, 17-20]

His offering won Selene such favor that she refrained from slaughtering him even though his weakness once precipitated her ruin. Eliphas helped Selene prepare for her ascension spell by joining her Inner Circle, where his constant attempts to win back her favor roused the contempt of her new lover, Wither. Still, despite the tension, Eli, Selene and the Inner Circle worked together to achieve her plans.

They traveled to the ruins of Genosha, at that point essentially a mass grave of 16 million mutants, where Selene intended to harvest the 16 million dead mutant souls that rested there - 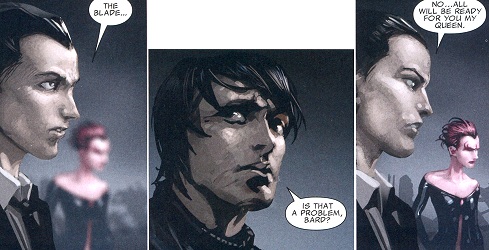 after Eliphas resurrected them with the Techno-Organic Virus. The plan was set, save for one minor detail: Eliphas no longer possessed the spirit blade needed to complete the ascension ritual. Instead of confessing this to Selene, he discretely asked Blink to bring him to Warpath’s residence to retrieve it. He instantly regretted this decision, however, as Blink reported him to Selene without hesitation. [X Necrosha, X-Force (3rd series) #21-22] 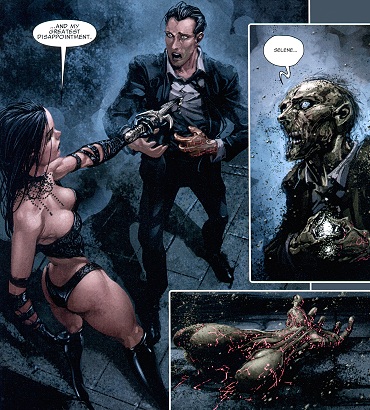 Eli suffered through Selene’s disappointment, but was allowed to keep his life, for the time being. At her behest, he traveled to the headquarters of the X-Men to recover it, a mission that brought him face to face with his old Apache nemesis, Warpath. Although Eliphas eventually succeeded in recovering the blade, he failed to win back Selene’s favor. She chose to punish Eliphas for his continued failures - that punishment being death. After being stabbed through the chest with the spirit blade, Eli Bard shriveled into dust. He died at the hands of the woman for whom he sacrificed everything, leaving in his wake nothing but his forearm, which still bore the signature traces of the Techno-Organic Virus. [X-Force (3rd series) #23-24]