Fabian Cortez was born to European royalty, a silver spoon in his mouth, inheriting title, recognition and his family's financial empire as his birthright. It wasn't enough. [Stryfe's Strike File #1] Cortez had ambitions of personal glory far beyond what even his pedigree could obtain for him. As both he and his sister Anne Marie developed mutant powers, Fabian spun that into a cause for mutant supremacy, rallying others to his banner. Although he had no real devotion to the ideals he espoused or the people who followed him, Fabian's rhetoric and natural charisma allowed him to build a power base. Cortez framed his cause as the cause of Magneto, presenting the former mutant terrorist as a freedom fighter for their people, a messiah who deserved acolytes to fight in his name.

Cortez and these Acolytes decided to present themselves to Magneto for benediction. They attacked a S.H.I.E.L.D. launch facility, stealing a shuttle craft to fly out into orbit and reach 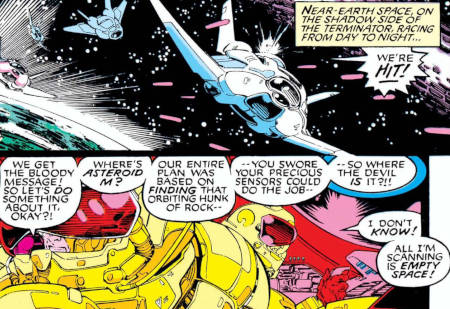 Magneto's Asteroid M, where the former revolutionary had retired to seclusion. Major Harry Delgado and his S.H.I.E.L.D. team pursued the Acolytes to Magneto's front yard, where the Master of Magnetism destroyed the Acolytes' craft and the pursuit ships for irritating him. Magnus intended to return them all to the ground with a warning, but Anne-Marie begged an audience on behalf of the Acolytes.

Tensions remained high when the Acolytes and S.H.I.E.L.D. agents revived from their injuries aboard Asteroid M. Anne-Marie attempted to lash out at the agents, but her powers were 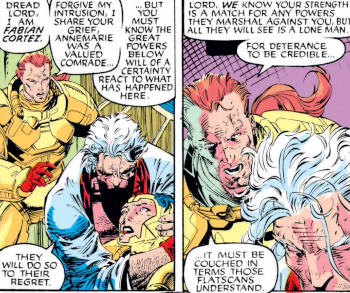 dampened by Magneto's cautionary inhibitor fields. The S.H.I.E.L.D. agents' combat armor remained powered up, however, giving them an edge. Magnus found his guests in the middle of a stand-off when he came to greet them and, when Anne-Marie rushed to his side, a trigger-happy S.H.I.E.L.D. agent named Deke fired on her. Magneto killed Deke in turn for shooting Anne-Marie in the back. Fabian Cortez presented himself to Magnus at that point, fueling Magneto's fury over his sister's injuries. He pressed Magneto to accept the supplication of the Acolytes, end his self-imposed exile and retake the cause of mutantkind.

As Magneto considered Fabian's words, he took pre-emptive measures to arm himself against potential retribution from the human nations, as an international incident was brewing over the Acolytes' firefight with S.H.I.E.L.D. He retrieved a cache of nuclear missiles from a Russian submarine, the Leningrad, he sank years earlier, but had an encounter with the X-Men. Wolverine 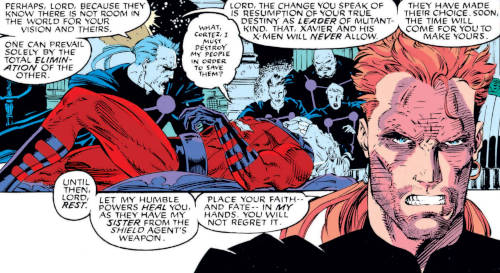 managed to tear into Magneto's chest with his Adamantium claws, even through Magnus' armor. Fabian Cortez approached Magneto upon his return and offered to use his own mutant abilities to heal Magneto of his injuries, recharging him. As Magneto passed out to recover, Cortez continued pushing for mutantkind to take an active stand against human oppression.

With Magneto convalescing, Fabian Cortez led the Acolytes in an attack against Genosha. The island nation had only recently ended decades of mutant rights abuse, using their Mutates as indentured slave laborers. Rogue of the X-Men had also been brought there for recovery after the 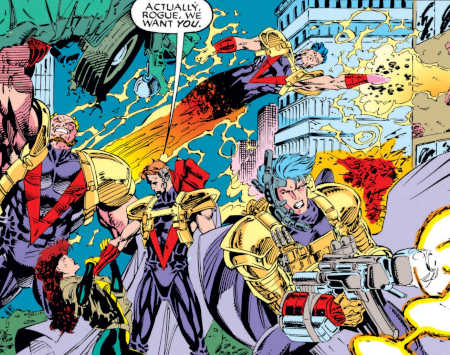 fight with Magneto and Fabian Cortez saw the need to recruit or eliminate Magneto's former paramour. The brutality of the Acolytes' attack drew out the X-Men in response and Cortez stood haughty and arrogant against the likes of Wolverine and Psylocke. This all, in turn, provoked Magneto into coming to the aid of his supporters. Cortez cheered his lord for coming out to fight by his Acolytes' side. Although the X-Men were captured by the Acolytes, Magneto initially chastised Fabian for attacking without his leave.

Changing the subject, Fabian Cortez then revealed an anomaly he had discovered in Magneto's genetic scans while healing him earlier. This anomaly led Magneto to discover that, years ago, while he was in the custody of Moira MacTaggert, she tinkered with his genetic sequences to affect his brain chemistry. Moira had hoped to prevent any instability in his mind, but Magnus saw it as a personal violation of the highest order, making him doubt whether every thought he had had since then was truly his own. This was the final nail in the coffin for Magneto's recent pacifism and reformation -- Fabian Cortez and the Acolytes now had the dreadlord and mutant supremacist they wanted in Magneto. 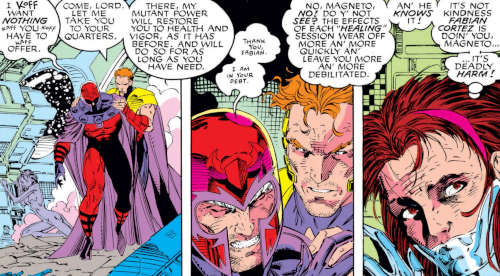 Using a version of Moira's process on the captive X-Men, Magneto and the Acolytes brainwashed the Blue Strike Force into willingly joining Magneto's forces. Earth's governments prepared to enact the Magneto Protocols and destroy Asteroid M entirely using an orbital plasma cannon, prompting the X-Men's Gold Strike Force to assail Asteroid M first in order to save their friends and Magneto as well. During the fight that followed, the true insidious nature of Fabian Cortez's work became apparent. Cortez had not been healing Magneto in their sessions; rather, Fabian's booster effect merely supercharged Magnus's mutant abilities, causing him to feel better while doing nothing to undo the internal injuries he suffered following Wolverine's attack. The scope of Magneto's injuries reached the point where he began to physically discorporate, but by that point

Cortez was long gone. Fabian Cortez sacrificed Magneto, his sister and his fellow Acolytes as martyrs to the mutant cause, left to die fighting the X-Men, facing the plasma cannon or the stolen nuclear warheads he triggered on the way out the door. And, while the X-Men got to safety, Magneto and his remaining Acolytes chose to stay behind and die as the plasma cannon went off. [X-Men (2nd series) #1-3]