• Bend light, space, and form,
allowing her to become invisible
to the naked eye, alter her physical
characteristics and appearance, or
open portals for teleportation across vast distances.
• Wields laser pistols, plasma-casting gauntlets, and retractable wrist spikes tipped in poison

The early life of the mutant known as Fatale has yet to be revealed. Dark Beast claims to have experimented on her extensively, making it hard to determine which of her abilities are innate and which are the result of McCoy’s genetic experiments. [X-Factor (1st series) #143] As an adult, she made a name for herself as one of Europe’s most notorious, sought-after and highly-paid assassins. [X-Factor (1st series) #112] She also became Dark Beast’s loyal henchwoman. At his behest, she used her shapeshifting powers to pose as a waitress named Pamela Greenwood in order to get close to the X-Man known as Bishop. Dark Beast wanted her to keep tabs on Bishop, a time-displaced mutant who had also spent time in McCoy’s native reality, a fact that made him 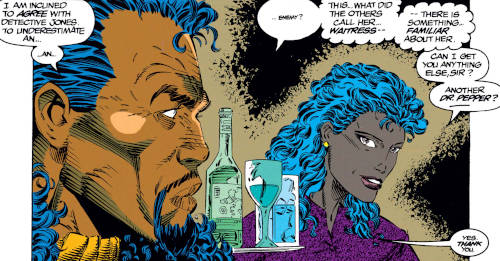 potentially dangerous. When Bishop first noticed ‘Pamela’ at Harry’s Hideaway, a regular hangout spot of the team, he thought she looked familiar, although he couldn’t quite place her. [Uncanny X-Men (1st series) #299, X-Men (2nd series) #49] 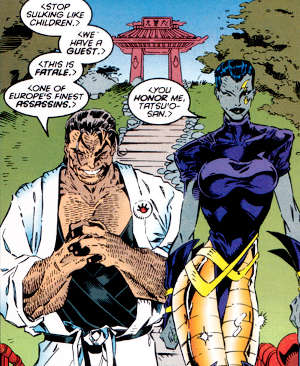 Not long after, Fatale was dispatched by Dark Beast to capture Havok, whose powers were spiraling out of control. She tracked Havok down in Tokyo, where she was attacked by X-Factor. During the battle, Mystique recognized her by name, as Fatale’s reputation preceded her. Having done her homework on the team and their individual abilities, she proved a worthy adversary and managed to teleport away with her prisoner. When Havok regained consciousness, he found himself strapped aboard a frigate that was about to depart from Japanese waters. Fatale’s plans were foiled when Yukio showed up, intent on rescuing Havok. She and Fatale proceeded to fight, but Havok once again lost control and released an explosive blast. Fatale survived the explosion, teleporting away to safety and reporting her failure to the Dark Beast. [X-Factor (1st series #112-114] Back in the United States, she was finally able to secure Havok’s capture through the intervention of Random, another henchman of the Dark Beast. [X-Factor (1st series) #117-118] 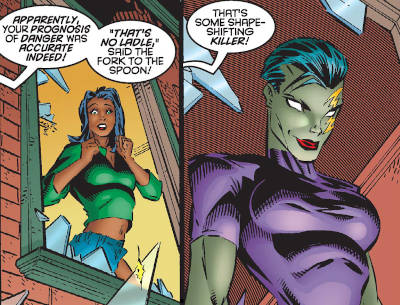 Meanwhile, she continued posing as Pamela Greenwood, keeping Bishop under close surveillance. Ultimately, Bishop realized she was spying on him and confronted her in her apartment. Fatale was about to murder him when Bishop was saved by the timely intervention of the 616 version of the Beast. She tried to go after them but once again botched the job when she accidentally ruptured a gas main and a power line, causing an explosion. [X-Men (2nd series) #48-49]

As per the Dark Beast’s instructions, Fatale later teleported Random to X-Factor’s Fall’s Edge Compound, where he could spy on the team and see what they were up to. [X-Factor (1st series) #124] Always eager to do her master’s bidding, she even offered to take out Beast when her employer decided to supplant his doppelganger, but McCoy turned down the offer, being up to the task himself. [X-Men Unlimited (1st series) #10] 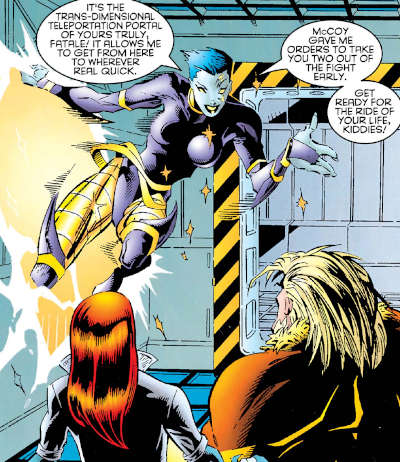 Shortly afterwards, the Dark Beast and Fatale allied themselves with Onslaught. As part of his schemes, they lured X-Factor to a factory in New Jersey. There, the team was drawn into a fight against Fatale and the now brainwashed Havok. Fatale fully displayed her sadistic nature, taunting Polaris that Havok was hers now, urging Alex to kill his former teammates and even exposing Random’s betrayal before everybody. However, Fatale and the Dark Beast ended up being defeated by X-Factor and were detained. [X-Factor (1st series) #125-126]

Soon afterwards, Havok, no longer brainwashed but determined to adopt a more hard-edged approach on the mutant-human relations, freed the Dark Beast and Fatale from captivity. McCoy and Fatale were reunited as members of a new Brotherhood led by Havok, reimagined by him as 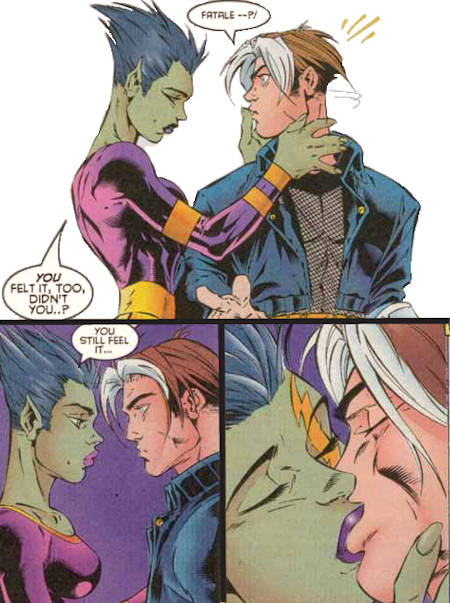 a radical group with a more proactive stance on mutant affairs. Fatale seemed genuinely fascinated, perhaps even a bit taken with Havok, and intimated to him that the two of them could make a team on their own and that they didn’t need McCoy. [X-Factor (1st series) #131] The Brotherhood soon tricked the all-powerful but uncontrollable Nate Grey into securing a deadly gas for them. The trio reached out to Nate, in an attempt to recruit him into their ranks. Fatale, in particular, plied him with suggestions about how mutants should stick together. She also tried to seduce him, even kissing him on one occasion. Nevertheless, Nate soon severed ties with them. [X-Man #26-29]

The Brotherhood later joined the X-Men in protecting a Gene Nation village in Northern Sudan from Humanity’s Last Stand. With Fatale and the Dark Beast on a more equal footing under Havok’s rule, she seemed to grow a bit more audacious with McCoy, even calling him ‘fur-face.’ She also seemed to be getting slightly less bloodthirsty, perhaps under Havok’s influence. After defeating the Stand, the Dark Beast summarily executed the soldiers of the organization, much to the X-Men’s horror. However, this was just an illusion, as Fatale had actually teleported them away, having agreed to the ruse in exchange for McCoy not slaughtering them for real. In fact, she consigned them to a worse fate, though, as they were destined for McCoy’s horrific gene-pools. [Uncanny X-Men Annual ‘97] Despite answering to Havok, Fatale didn’t entirely forsake her assassin status and was later part of a veritable army of assassins attacking Elektra. [Elektra (1st series) #5, 7]

Fatale kept on obediently doing Havok’s bidding in the coming weeks, even rescuing X-Factor’s lives once by teleporting the entire team away right before they were about to fall into the hands of government troops. [X-Factor (1st series) #137] Regardless, when Havok found out about McCoy’s secret experiments and decided to put an end to the Brotherhood, she showed her true colors and sided with the Dark Beast once again. However, she was no match for Havok and was defeated by him on two occasions in quick succession. [X-Factor (1st series) #143-144]

Fatale apparently parted ways with McCoy afterwards and eventually became one of the many mutants who lost their powers on the fateful M-Day. [New Avengers (1st series) #18] She joined X-Cell, a depowered mutant terrorist group who held the US government accountable for losing their powers. The team battled X-Factor on one occasion, during which Multiple Man broke Fatale’s right arm. Eventually, the X-Cell members were repowered thanks to Quicksilver’s Terrigen Mist, their abilities restored and Fatale’s arm completely healed in the process. Their triumph proved short-lived, as one of their own, Elijah Cross, exploded as a result of the unstable 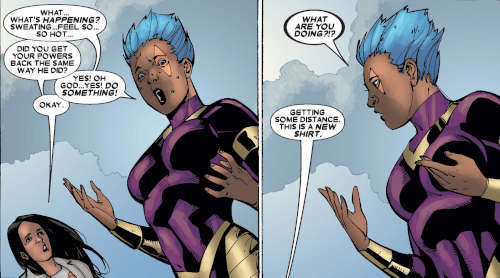 Mist. Realizing she was also about to explode, Fatale started panicking. One of her equally afflicted teammates, Abyss, pulled her and another teammate, the Reaper, into the Brimstone dimension, where they could potentially escape imminent death. [X-Factor (3rd series) #18-20]

Abyss’ gamble paid off. Inside the Brimstone dimension, time froze around Fatale and her two allies, preventing their bodies from blowing up. Eventually, the A.I.M. scientist Terrance Hoffman pulled them from that dimension and strapped them on to a machine, draining their energies and leaving them once again powerless. Thankfully, X-Factor infiltrated the A.I.M. base and set Fatale and the others free. Fatale was carried to safety by her old nemesis, Polaris, their history of enmity apparently long behind them now. When Fatale saw Quicksilver serving in this incarnation of X-Factor, she snapped, as she was resentful of him for turning her into a walking bomb. She 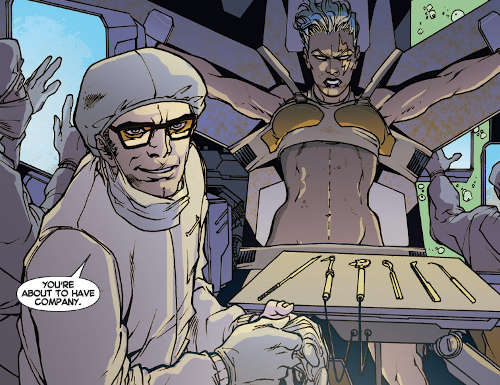 vowed she would never forgive him for what he did to her and she would never stop trying to get even. [All-New X-Factor #1-2] Fatale didn’t hold back on her promise. Shortly afterwards, she crashed an X-Factor press conference and publicly accused Quicksilver of being a murderer and a criminal, before being escorted out by security. Her accusation was not refuted by Pietro who used this incident as incentive to turn over a new leaf. [All-New X-Factor #12]

The mutant known as Artemis from the Age of Apocalypse reality may or may have not been Fatale’s alternate counterpart. McCoy’s experiments may account for Artemis’ different, 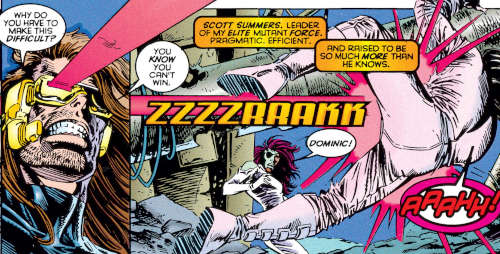 chameleon-like abilities. After refusing to join Sinister’s ranking officials, Artemis was imprisoned in his Breeding Pens, from which she escaped, leading a number of other mutants out. However, they were eventually hunted down by Apocalypse’s Prelates, and Artemis ended up in McCoy’s gene labs.