• Generate bio-electrical force which
he can manipulate into high-voltage
blasts, tangible shields and
shaped forms such as giant
fists, and his "shock troopers"
-- humanoid energy wraiths able to interact with objects and operate as extensions of his will, able to absorb outside sources of electricity to boost and recharge his own abilities

Life was pretty much perfect for Albert Louis. He had a good job, enough money, good friends, and a romantic interest. But his perfect life in Halifax, Nova Scotia was shattered when he was attacked one evening by a group of armored enforcers called the Hardliners. The Hardliners were employed by Senator Robert Hagon, whose proposed Super Powers Bill would force all paranormals in Canada to register themselves. Hagon had identified Albert as a mutant and sent the Hardliners to make an example of him, even though the Super Powers Bill had not yet been passed. Albert was forced to reveal his mutant power in public to protect his friends and defend himself from the Hardliners. He unleashed several energy “shock troopers” against his attackers, enabling him to escape. [Alpha Flight (1st series) #118] 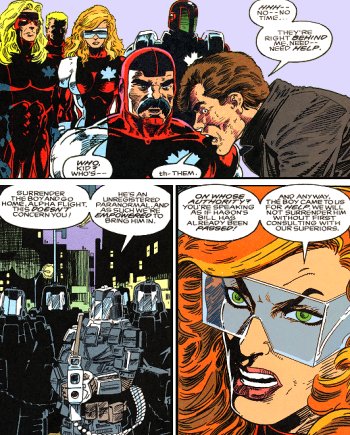 Albert made his way across Canada on the run from the Hardliners, narrowly evading them at every turn. He eventually arrived in Toronto, where he hoped to find a safe haven with Alpha Flight. Momentarily distracted by news of the team, Albert was discovered by the Hardliners and the chase was on once again. Thankfully for Albert, he managed to find Alpha Flight on the streets of Toronto and begged for their help. The Hardliners arrived, demanding that the Alphans turn Albert over to them. Guardian pointed out that the Super Powers Bill had not been passed yet and refused to give Albert over to the Hardliners without consulting with her superiors in the Canadian government. The Hardliners attacked and a battle was fought over Albert. Alpha Flight emerged victorious and Albert accompanied them back to Department H. [Alpha Flight (1st series) #119-120]

The Hardliners soon landed in court for preempting the government’s Super Powers Bill. Albert joined Dept. H’s trainee program and adopted the codename Feedback. With Hagon’s Super Powers Bill looming, Albert participated in a press conference and urged all unregistered paranormals, even those like him whose only wish was to be left alone, to come forward and voluntarily register with Alpha Flight. He hoped to pay back the Hardliners for tearing his life apart by ensuring that their stunt worked in Alpha Flight’s favor by bringing new superhumans into their ranks. 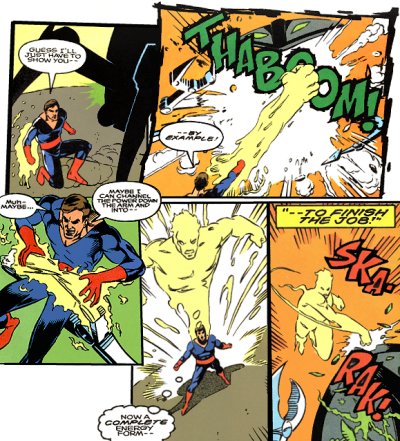 Albert dealt with his frustration by pouring himself into his training. Feedback progressed quickly during combat training, quickly mastering new applications of his powers. Though he displayed good knowledge of his power and how to use it to his advantage, he still failed in some exercises. This only added to his anger at being thrust into this new life. After one such session, Feedback wanted to try the exercise again straight away, but Manikin, who was overseeing his training, explained to him that he had exhausted his power and he needed to be patient as they assessed both the source and limitations of his powers. This annoyed Feedback who was impatient. Albert was struck a further blow when he learned that the Hardliners would not go to jail because a mysterious benefactor had offered to pay for the damages caused by their actions. To make matters even worse, the Super Powers Bill was passed by Parliament. [Alpha Flight (1st series) #126]

Feedback was then captured by the Hardliners who sought revenge on Alpha Flight. Albert was held prisoner, unable to use his power, and in danger of being maimed while Alpha Flight attempted to rescue him. Fortunately, he was successfully rescued by Puck and reunited with his new friends, who had taken down the Hardliners. [Alpha Flight (1st series) #128-129]

However, the reluctant hero was not quite out of danger. He and Alpha Flight were ambushed by the Master of the World and his latest Omega Flight team. The Master revealed that he was the secret benefactor driving Senator Hagon’s Super Powers Bill and bankrolling the Hardliners. During the lengthy battle with Omega Flight, Feedback battled both Brain-Drain and Miss Mass, but the inexperienced mutant was no match for them on his own. Shaman came to Feedback’s aid against Miss Mass and together, they managed to take the obese villain down. [Alpha Flight (1st series) #130]

The Master of the World and his flunkies were defeated but trouble awaited Albert and Alpha Flight when they returned to Department H. Their government liaison General Clarke announced that Alpha Flight was being suspended and would no longer have official status until the Super Powers Bill issue was fully resolved. The members of Alpha Flight were offered advisory roles in Department H and some accepted this offer. Feedback took this opportunity to leave this life of peril and heroics behind. Although Alpha Flight has been reformed several times since Albert’s departure, he has not been part of any subsequent incarnation of the team. Given his desire for a normal life, it is likely that Albert has tried to regain a semblance of normalcy after his time with Department H. It is unknown whether or not Feedback retained his powers following M-Day. If he was among those de-powered by this event, he would no-doubt count himself among the lucky ones. [Alpha Flight (1st series) #130]