• Mystical adept who inherited the power of his
venerated ancestor, able to cast spells including
self-levitation, telekinesis, clairvoyance, mystical
bolts, bindings, or shields, illusions, and
transmutation

Eons ago, the sorcerers Merlyn and Feron were both students of Necrom, the Sorcerer Supreme of their race. Together, they learned of the Multiverse and the energy matrix of awesome power that was created when the Multiverse was aligned. However, this happened too infrequently for the power to be harnessed. The trio journeyed to Earth-616, known as the Prime Earth, whose interface was marked by a lighthouse. There, the original Feron communicated with a cosmic being known as the Phoenix, calling upon the Phoenix at the moment of alignment between the Multiverse to project the essence of the lighthouse through the Multiverse, so that the lighthouse would exist on every plane of reality simultaneously.

Unfortunately, this was part of a wicked plan by Necrom to give himself the power of a god, as he tried to consume Feron, unaware that Feron was sustained by the power of the Phoenix, and able to resist Necrom's attack. In the process, Merlyn was thrown into the Multiverse, while Necrom

tore the portion of the Phoenix Force that had bonded to Feron from the mystic, causing great pain to both Feron and the Phoenix, who was confused and fled to the stars. Subsequently, Necrom bonded the stolen portion of the Phoenix to his own life essence and left it to incubate in a corpse, creating the Anti-Phoenix, the first plot in Necrom's plan. Following this, Necrom vanished into the Multiverse, leaving Feron to spend the rest of his life awaiting the rise of the Anti-Phoenix in an attempt to atone for the pain he had caused the Phoenix Force, and placed his power in the Earth to be claimed by his heir. [Excalibur (1st series) #50]

A thousand generations later, a young man with pale skin, simply called Feron, was raised at a monastery in County Sligo, Ireland, where he was trained by monks in mystic arts while preparing for the rise of the Anti-Phoenix. Feron remained in a levitated state, never touching the ground. His feet were bound in the skin of the mythic black boar until the time would come when he would 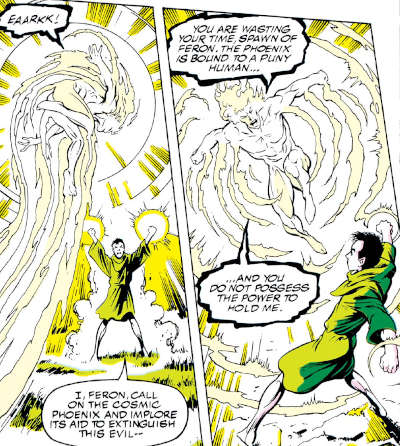 receive the power of the Phoenix. While a kindly monk began to worry that Feron's life had been ruined, deprived of the normal things a young man should experience, Feron did not seem bothered, accepting of his destiny, he longed to inherit the powers of the first Feron. When the heroic Excalibur, who were currently caught up in a battle with the sorcerer Necrom, arrived in Ireland, the monks took Feron to the scene of the battle, where his feet were placed on the ground for the very first time so that he could receive the power of the Phoenix. Unfortunately, the ritual did not go as Feron had planned, and he could not contain the power.

Necrom battled Excalibur, creating rock creatures to keep them occupied while he escaped. Feron was overwhelmed by the creatures, but Excalibur protected him. When they defeated the creatures, Feron angrily lashed out at Rachel Summers, known as Phoenix of Excalibur, telling her that she wasn't worthy of the Phoenix Force. One of the monks requested Excalibur forgive Feron and explained that he had waited all his life to receive the power of the Phoenix, and they had not anticipated the Phoenix choosing another host, Rachel. When Excalibur departed to go in search of Necrom, they permitted Feron to go with them, as his mystic powers may prove useful. [Excalibur (1st series) #48]

Feron's haughty attitude quickly wore thin with the members of Excalibur as they continued to fail to stop Necrom, and he boasted that he was prepared to fight to the death, as he possessed the knowledge to defeat the Anti-Phoenix. He also told Rachel Summers that the blood of Necrom's victims was on her hands. Feron was with Excalibur when they witnessed alternate dimensions 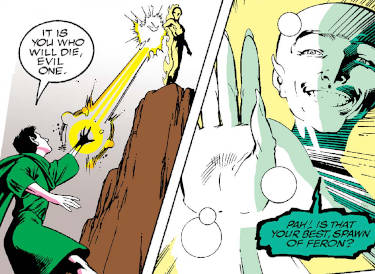 begin to collide. Eventually, Feron, grew tired of Excalibur and fled to fight Necrom on his own, though he did find himself accompanied by Kylun. Feron located Necrom and attacked him, which only amused Necrom, who lashed out at the young mystic with furious power. Necrom would go on to battle Rachel Summers, who obliterated him, while the lighthouse which connected to the Multiverse was destroyed by Excalibur. [Excalibur (1st series) #50]

Feron remained with Excalibur when they ventured to Braddock Manor, in need of a new home following the destruction of their lighthouse. There, he watched over the comatose Rachel Summers. [Excalibur (1st series) #51] One evening, when the rest of Excalibur were hosting a party at the Manor, Feron hovered outside in the rain, still lamenting that he did not obtain the Phoenix Force as is his birthright, when he was slammed into a tree and knocked out by an intruding Jamie Braddock. [Excalibur (1st series) #55]

When Captain Britain and Meggan were turned into frozen gold statues by the mutant known as Alchemy, Feron was called upon to use his mystic power to reverse the transmutation. Although he was unable to reverse Alchemy's mutant power, he did find himself assisting Excalibur and the X-Men's Blue Team against the Troll Associates, who had captured a number of the heroes. [Excalibur (1st series) #58]

Feron became frustrated when the monks did not allow him to return to Ireland. Instead, they wanted him to remain at Braddock Manor with Excalibur to integrate into society and live in the real world. Feron was not impressed when Kitty Pryde had him assist her with the computer system at Braddock Manor, not wanting to sully himself with servile tasks. Feron stood his ground 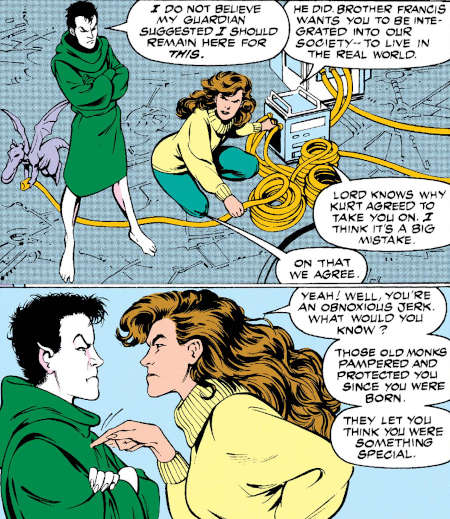 when Kitty lashed out at him and told him that he wasn’t the special something that the monks told him he was. Feron must have known something about Kitty's early days with the X-Men, as he compared himself to her back then, which is why Kitty didn't put up with his attitude and told him to do what she asked him. They were interrupted by the arrival of Widget, warning them about Sentinels. When Kitty went to talk to Nightcrawler about Widget, Feron was left behind to complete the work Kitty gave him – with the dragon Lockheed watching over him to make sure he did as he was instructed. [Excalibur (1st series) #61]

Feron found himself left at Braddock Manor on his own and struggled with the basic task of cooking food for himself, although he did manage to get through half of the list of tasks Kitty left for him to do. His labors were interrupted after he became startled when Widget surprisingly materialized before him again, this time uttering something about Rachel Summers. Frightened, Feron fled the Manor. [Excalibur (1st series) #64] Feron was hiding outside the Manor when Excalibur returned with Rachel Summers and, after ranting about the Manor being haunted, Feron accused Rachel of giving away his inheritance when he realized the Phoenix was gone from her. He told her that she deceived the Phoenix Force, to which Rachel promptly told Feron she wouldn't have given him the power even if she wanted. [Excalibur (1st series) #66]

Feron discovered Kitty Pryde crying over the loss of several friends one day and tried to command her to stop crying, only to be reminded that Kitty was not one of the monks that would obey his every order. When Kitty told him that sometimes someone who was crying needed a hug, Feron allowed her to hug him and, surprisingly, he even hugged her back. [Excalibur (1st series) #68] 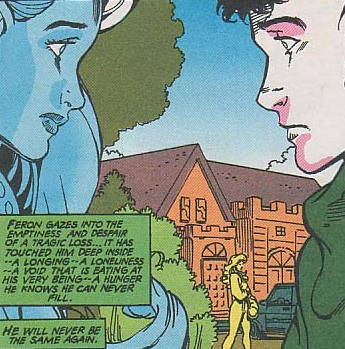 The young mystic attempted to do more good for his teammates when he created a magical replica of Captain Britain, who was lost in the Time Stream. Feron hoped that the replica could snap Meggan out of the catatonic state she had fallen into since the loss of Captain Britain. Unfortunately for Feron, Meggan saw through the ruse and Feron found his mind connecting with Meggan's. Overwhelmed by Meggan's emptiness, Feron too fell into a catatonic state. Kitty Pryde witnessed this happen, but did nothing to help Feron, leaving him with Meggan at the waterfall on Braddock Manor grounds as she had depart for the United States. [Excalibur (1st series) #69-70]

Feron was unable to maintain his corporeal form and melted into the river, where he was washed away from Braddock Manor. Excalibur was going through a restructure at this time and apparently no one even noticed that he had disappeared. [Excalibur (1st series) #124]

Feron eventually surfaced on High Street. His form had rematerialized and he stumbled across the idiotic Crazy Gang, sometime-enemies of Excalibur, who were mourning the loss of one of 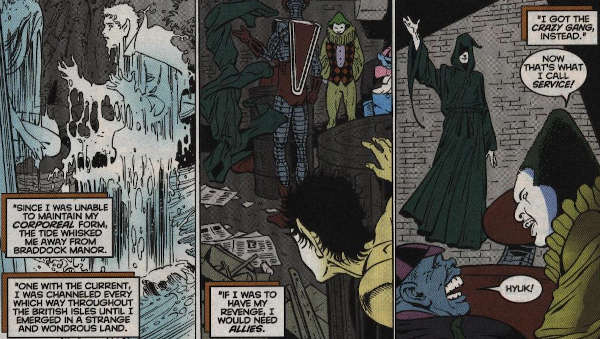 Feron eventually explained to them what happened to him after his encounter with Meggan, and lamented the fact he never amounted to what his destiny was supposed to be. The others gave Feron some encouraging words, and Feron finally realized that he was special.

Feron then joined in with the celebrations for the remainder of the party, and attended the wedding of Captain Britain and Meggan, where he kept out of trouble for the festivities. [Excalibur (1st series) #124-125]

Feron's current whereabouts remain unknown and he is apparently no longer with the Crazy Gang, for when they last appeared, fighting Deadpool and his Mercs for Money, a new robotic Executioner was with them. Perhaps Feron has returned to the monastery, awaiting his great destiny, or maybe he is still trying to adapt to a regular life.