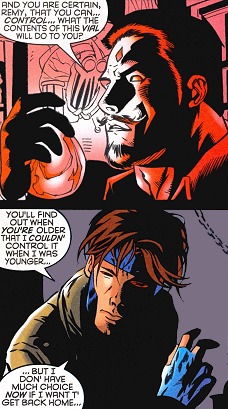 Gambit solved the problem by asking Essex to re-implant the grey matter his future self had excised back into his brain. This gave him advanced kinetic abilities, enabling him to return himself and Courier to the present several months after they had left. Gambit hoped that he’d be able to control the power now, unlike his younger self.

A pleasant side effect was that his powers now were an external field around his body, enabling him to touch and kiss Rogue without her absorbing him. That happiness was to last only shortly, though, as they found that their mutual tendency towards secrecy and their own issues and problems made them unable to sustain a relationship right then. So, they decided to call it quits.

In addition, Gambit’s powers once more started to take on uncontrollable levels, threatening to blow up anything he touched. As if this wasn’t enough for him to deal with, his father stepped down as Guild leader, making Gambit the new leader, a rather unexpected move, as up to this point he was still considered exiled. Meanwhile, the New Son, for unknown reason, changed his plan to create a new world and, over Fontanelle’s protest, called out a killing contract on Gambit, taken up by all kinds of assassins and mercs, including Gambit’s ex-wife, Bella Donna Boudreaux. [Gambit (3rd series) #16]

Gambit survived a first assassination attempt of Bullseye, thanks to the arrival of the Assassins Guild under Bella Donna’s leadership, who wanted the kill for themselves. In the confusion, Gambit managed to slip away, find shelter with the Thieves Guild and, with the help of Tante Mattie and his hypercharged powers, he was capable of healing himself from the lethal injury Bullseye gave him. More villains arrived and Gambit was saved by FBI Agent Denti, of all people, made rather strange by the fact that they were attacked by Denti’s alter ego, the X-Cutioner. [Gambit (3rd series) #17]

In the battle between the different villains and assassins, all trying to earn the money on Remy’s head, Gambit and Bella Donna were buried under a falling building. 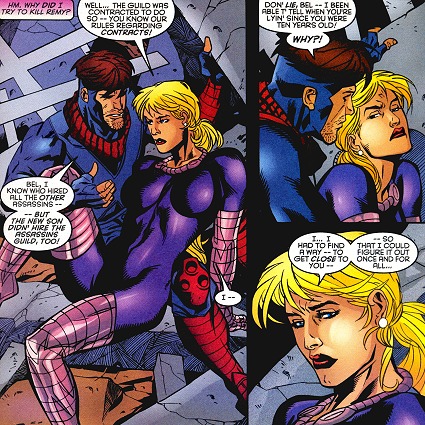 Gambit used his powers to create a pocket underneath the rubble for them. During their conversation, Gambit figured out that the New Son had hired several killers, but not the Guild. Bella Donna had volunteered them because she was looking for a way to get closer to him, to figure out if she still loved him. While Gambit admitted he didn’t know how he felt, they agreed that, now that they were Guild leaders, they could stop the war between their factions and work together to figure out the Guild prophecies about the Old Kingdom and restore some normality to their lives. Gambit then freed them by charging and dissolving the entire debris around them. It turned out, though, Remy wasn’t aware that The New Son had started the assassination game to force Gambit to escalate the use of his powers. [Gambit (3rd series) #18-19]

In the meantime, the X-Man, Archangel, had been contacted by The New Son to attack Gambit (having been mutilated during the Morlock Massacre, he was not exactly Gambit’s 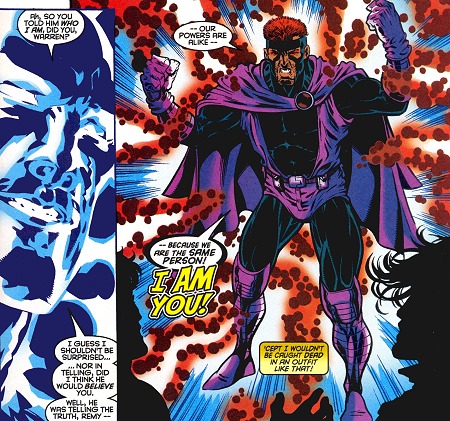 biggest fan), though actually Warren only pretended to work along, double-crossing The New Son. Gambit and some X-Men followed Archangel to the New Son’s Crystal Cathedral, a place outside time, as Gambit finally let them in on his connection to the New Son. The New Son - an energy being - reacted angrily to the double-cross and claimed that he was trying to save the world from Gambit and that he was trying to make Remy realize the scope of his fell power, by force if necessary. Shockingly, The New Son was revealed to be another, older version of Gambit. The battle destroyed the citadel and the X-Men left though one of Quiet Bill’s portals to their world, while the New Son vanished through another. [Gambit Annual 2000]

Afterwards, Gambit and Fontanelle compared notes on The New Son, trying to figure him out. Though they were able to figure some things out, in the end they faced more questions than answers. The New Son’s original plan had been to create a new Earth – a paradise - and move everybody there as this world would soon be uninhabitable. The terraforming equipment, the blueprints for a Celestial ship, Moira’s files on mutants who’d put up a fight and the Crew A.S.K.E.W. to control humans all were part of this plan. But when Remy brought him Quiet Bill, who could gaze into other realities, the plan fell apart. The place in orbit where The New Son’s new Earth was to go was now occupied by the Counter Earth created Franklin Richards to save the heroes from Onslaught. So, the New Son had been using Quite Bill to find a vacancy in another reality. That, however, provided no answer as to why he would want him dead. Also, Fontanelle helped Gambit understand that his father might have left him in charge of the Guild, hoping that he and Bella Donna would manage the Guild reunion, an event that was foretold as the resurrection of the Old Kingdom. His enhanced power apparently were another factor leading towards this. [Gambit (3rd series) #20] 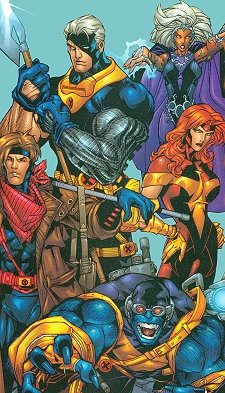 In the meantime, the X-Men had been restructured and Gambit became unofficial field leader of one loose group in addition to his other duties. Gambit called his group to Venice, needing their help. However, they had barely arrived when they were attacked by a group of the mysterious Neo. Afterwards, Gambit explained he had asked them there for a rescue mission for a friend. Colonel Vazhin, formerly of the KGB, had once done the Thief Guild a favor and now needed help saving one of his agents from another group of Neo, which the X-Men eventually managed with the help of a thief friend of Storm’s. [Uncanny X-Men (1st series) #381-383]

In the process, they captured an intergalactic slaver named Tullamore Voge and several X-Men found themselves imprisoned by Voge’s compatriots, the Crimson Pirates – a group of slavers. The other team of X-Men followed them, trying to save them and the people already captured while Gambit’s group seemingly struck a deal with the Pirates, helping them capture people.

The other team, led by Rogue, caught up, leading to a big fight. When Rogue confronted Gambit, she found that she trusted him, despite his seemingly having switched sides. The whole thing turned out to be a big scam, enabling both teams to beat the Pirates and Rogue to kill their leader, Goth, with the power she absorbed from Gambit. As a result, their relationship was back and running. [Uncanny X-Men (1st series) #384, X-Men (2nd series) #104, Uncanny X-Men (1st series) #385]

In between his missions with the X-Men, Gambit tried to find out more about his own past, to learn what the New Son was after but found that the records of his birth had been erased. In addition, the Casket of All Tomorrows’ contents, needed to initiate the resurrection of the Old Kingdom - to create Heaven on Earth - had been destroyed. Gambit figured out correctly that Guild members, Gris-Gris and Theoden, were the culprits on both accounts, but was surprised to learn that his absent father had bid them do it. [Gambit (3rd series) #21] 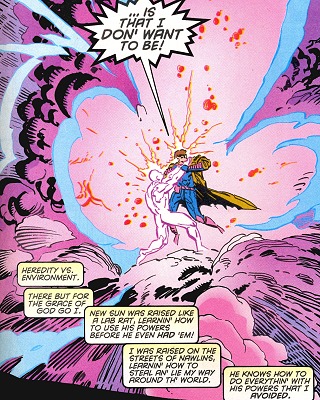 Soon, the New Son returned from his exile and revealed that everyone had misspelled his name the whole time; it actually was “New Sun”. He brought Gambit to his own Earth, which was in ruins, and explained that, when they followed their prophecies of the Old Kingdom and the Diable Blanc, they unleashed a chain reaction that literally brought “heaven on Earth,“ as cascading energy waves caused it to burn like a new sun, killing everyone besides himself. The New Sun tried to remake time but failed, breaking through to other universes instead. He wanted to prevent the same from happening on any other Earth, finding many in ruins, always with the same outcome. Therefore, he had decided to kill Gambit before he would cause the same events on Earth. They fought at the site of the Old Kingdom and Gambit blasted his “twin“ full force, burning out his increased powers in the process. The statue of the King toppled, its spear stabbing New Sun and, as that alternate Earth evaporated, Courier pulled Gambit through one of Quiet Bill’s portals back to Earth. [Gambit (3rd series) #22, 24]

After the tragic death of Moira MacTaggert at the hands of Mystique, Gambit infiltrated the hospital the mutant terrorist was held in, intending to kill her. Storm stopped him and, together, they learned from Mystique about Destiny’s mysterious diaries and the predictions they held. [Uncanny X-Men (1st series) #389] 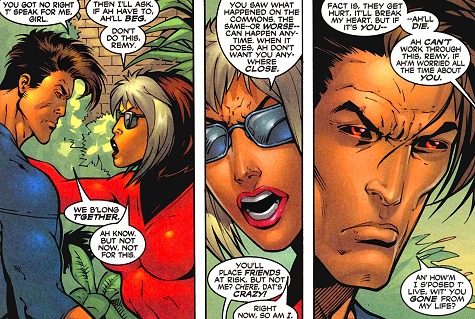 Storm decided to take a team of X-Men away from the mansion to find the diaries. Among the X-Men, she wanted was Gambit, but Rogue begged him to stay away. Her powers were out of control, making her a threat to everyone, and she couldn’t bear for him to get hurt. [X-Men (2nd series) #109]

After some of Storm’s group had already left the mansion, Bishop found himself plagued by nightmares about himself and Gambit fighting the X-Men, caused by a symbiont living beneath his skin. This entity, the Bete Noir, had power that rivaled the Phoenix Force itself and threatened to consume 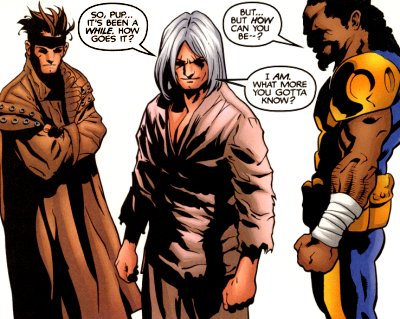 Bishop's body and unleash its evil upon the universe. Stryfe tried to hunt down Bishop for that power and Gambit, the only X-Man not under the villain’s thrall, took Bishop to his native New Orleans to meet his mysterious benefactor – the Witness, a man who could “remember” all potential futures. Bishop was puzzled to see the two men at the same time, as he still believed that the Witness was Gambit‘s future self. The ancient man called LeBeau neither denied nor confirmed that suspicion. At first, they tried to contain the energy build-up within Bishop with a modified version of Havok’s old costume but it was too late, as the entity was about to break out. An uncharacteristic self-sacrifice by the chaos-bringer, Stryfe, freed Bishop and the world from the threat of Bete Noir. Afterwards, neither he nor Gambit returned to Xavier’s mansion. [Gambit & Bishop #Alpha, 1-6]