• Nascent alien life-form able to intensify
the emotions of other beings, create a
possessive passion in males, glide on
her transparent wings or wrap them around
herself to become invisible

The striking female called Gosamyr belongs to an unnamed race of alien beings. Her family was involved in textile manufacture, but her brother had dealings with a wicked alien called Spyder, whose primary motivation  was the buying and selling of merchandise - which included live 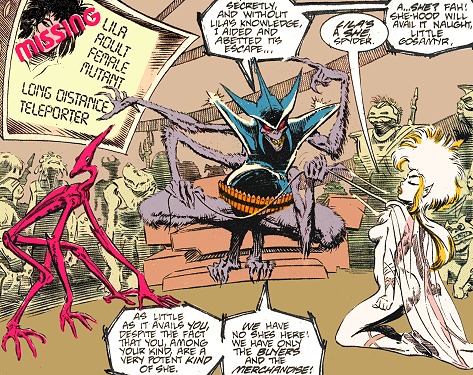 beings. Spyder’s organization was called the Webb and he resided aboard a space ship in which various aliens could go about buying his merchandise. Somehow, Gosamyr and her family became prisoners of Spyder, who intended to sell them as slaves. While her family was imprisoned, Gosamyr was kept on a leash at Spyder’s feet. When Spyder sought to re-claim interstellar celebrity singer Lila Cheney, as he previously financed the now-bankrupt people who took her into space, Spyder sent his “accountants” down to Earth to capture her.

While Spyder slept, Gosamyr escaped from her leash and secretly boarded the ship bound for Earth, intending to warn Lila and help her, hoping that Lila in turn could help her. Although Spyder witnessed Gosamyr’s escape, he decided to toy with her and let her leave, only to crush her when she eventually returned. When the accountants’ ship landed on Earth, these aliens invaded a concert where Lila was singing. This led to a battle between the aliens and Lila’s friends, the young mutant heroes called the New Mutants. Nevertheless, Lila was captured. Aboard his ship, Spyder monitored the battle and became fascinated by the New Mutants, wanting to take possession of them as well. 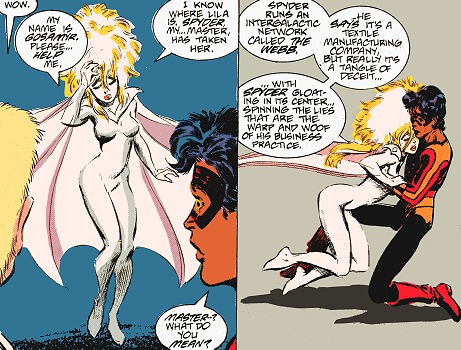 During the fight, Gosamyr stole a small space craft from the ship, and hid it. While the New Mutants watched in despair as the aliens’ ship departed with Lila, Gosamyr revealed herself to them, instantly collapsing into Sunspot’s arms. She explained her situation to them and offered to help them rescue Lila, provided they would help her save her family. Sunspot and Cannonball were both taken by the enchanting alien, while Mirage, Magik and Wolfsbane were somewhat suspicious of her. Nevertheless, Sunspot promised Gosamyr that they would help her. [New Mutants (1st series) #66-67]

En route to Spyder’s vessel, Gosamyr’s ability to heighten the emotions of those around her came into full effect. She pitted best friends Wolfsbane and Mirage against each other, while Sunspot and Cannonball continued to be in awe of her, so much so that they even began to ignore their

teammates. Gosamyr went so far as to make Sunspot fall in love with her completely,  and they at least kissed. Warlock, however, remained immune to Gosamyr’s destructive ways, but when he tried to raise the situation with Sunspot, he was rebuffed. Trouble continued, as Gosamyr manipulated Mirage into using her powers to give Wolfsbane her greatest desire - Cannonball. An illusion of Cannonball appeared before Wolfsbane, professing his love for her. However, she was devastated when she saw the real Cannonball and, enraged, attacked Mirage for the cruel trick. Gosamyr tried to intervene, pretending to be shocked at Mirage’s actions, but she was struck down by Mirage, who by now had realized Gosamyr was toying with them. [New Mutants (1st series) #68]

After boarding Spyder’s space station, Gosamyr remained hidden and observed as the New Mutants fought various alien life forms that attacked them. Gosamyr was briefly captured by one of these aliens, though, but Sunspot and Cannonball came to her defense. This, however, led to 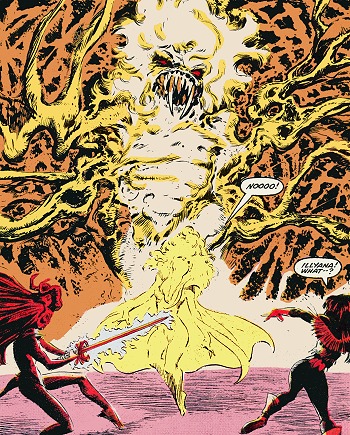 more in-fighting amongst the New Mutants, until Magik and Warlock, fed up with Gosamyr, plotted to reveal her for who she really was. Striking the ethereal alien with her Soulsword, Magik did just that, as Gosamyr reverted to a horrific, appearance. Briefly unconscious, Gosamyr’s influence over the New Mutants ended. When she woke, Gosamyr explained that she had merely acted the way she had been brought up; apparently she genuinely believed that everyone acted the way she had done. After seeing Gosamyr’s other appearance, Warlock recognized her race and revealed that they were considered rare and dangerous and suggested to his teammates that they leave Gosamyr immediately.

Sunspot, however, continued to stand by Gosamyr, defending her. Though the others were keen to abandon her, they still had to rescue Lila, so they continued on to Spyder’s lair, down on a nearby planet. Once there, the New Mutants located Lila - but they were captured instantly by Spyder. Gosamyr managed to evade the capture momentarily, before Spyder once again collared her. [New Mutants (1st series) #69] While the New Mutants tried in vain to escape so they could rescue Lila, Gosamyr underwent what was called in her race the “minor death”. Even though the process could rob her of the power over 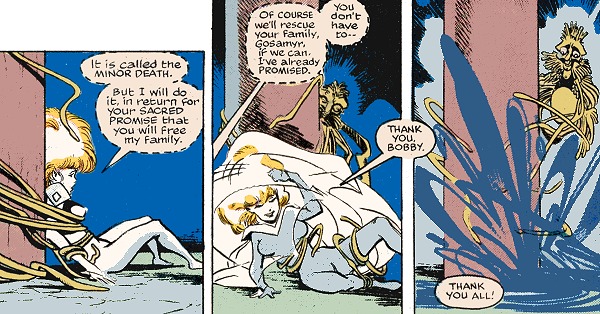 other’s emotions, Gosamyr entered the dangerous state that enabled her to escape her bonds and render herself invisible, by wrapping herself in her wings. She then set about freeing the New Mutants from their cage, but was injured in the process. Sunspot rescued her from her invisible state, and the New Mutants, particularly Warlock and Mirage, had a change of heart about Gosamyr. They still didn’t like or trust her but, seeing as she showed concern for them and put herself in danger, they agreed to honor their promise to help her rescue her family.

When Gosamyr and the New Mutants tracked Spyder and Lila down, they found that Spyder had forced Gosamyr’s family into a cocoon-like state to weave strands of silk, creating products of the rarest and most deadly creatures in the universe, each thread apparently worth a million times its weight in gold. Gosamyr fainted, which alerted Spyder to her presence. The New Mutants battled 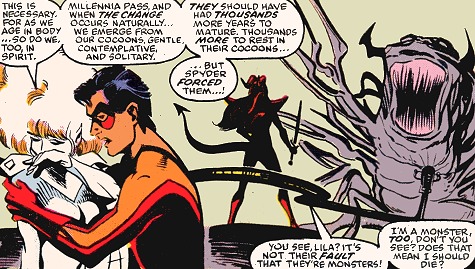 Spyder’s guards, while Gosamyr’s  family began to emerge from their cocoons. Gosamyr’s family attacked everyone in sight and destroyed the silk they had spun, angering Spyder. Gosamyr explained that her family was furious due to being forced from their evolutionary stage prematurely. Given that even the Brood feared Gosamyr’s race, the New Mutants had big trouble on their hands. Needing to end the battle before Gosamyr’s family escaped onto the planet proper and destroyed it, Lila made the ultimate sacrifice by teleporting herself and Gosamyr’s family into the nearby sun. Devastated, the New Mutants lashed out at Spyder and his forces, before deciding to cut their losses. [New Mutants (1st series) #70]

Magik tried teleporting the team back to Earth via Limbo, but they briefly ended up stuck in Limbo. Stranded in a dimension alien to her, outside regular space and time, Gosamyr had no choice but to remain with the New Mutants as they embarked on a deadly adventure during the crisis known as the Inferno. The New Mutants soon made their way back to their world, which was being invaded by Limbo demons. Despite her dangerous abilities, Gosamyr was hardly a skilled combatant and, during the demonic encounters, she usually clung close to Sunspot, who remained enthralled by her. After allying up with another team of young mutant heroes, the X-Terminators, the New Mutants temporarily sought refuge at a church. Gosamyr remained there, out of harm’s way, with the injured members of both teams, including Mirage, and nearly a dozen babies that the heroes had rescued from the demons. However, as the Inferno became increasingly more dangerous, and devastating for one member of the New Mutants, the injured heroes wanted to join their friends. Gosamyr offered to remain behind to watch the youngsters all by herself. This seemed to prompt an understanding between Mirage and Gosamyr. [New Mutants (1st series) #71-73]

After the demons were dealt with, Gosamyr found herself not under attack for the first time ever since she came to Earth, allowing her to take an interest in the city. However, Gosamyr considered the many skyscrapers across New York “ugly boxes” and she wondered why anyone would cover an entire island in them. [Cloak & Dagger (3rd series) #4] At a local hospital treating civilians that had been injured during the Inferno, the New Mutants ran into the child heroes,

Power Pack. Both teams used their abilities to assist the staff and Gosamyr proved extremely useful by using her alluring power to help calm down the male patients, making them forget their pain. However, Power Pack were facing problems of their own, as recently their parents had discovered that the children had super powers. Constantly worried sick about their four kids, the Power parents were both in shock and disarray, until the New Mutants concocted an elaborate scheme to make the Power parents believe their children had been temporarily replaced by super-powered doubles. Gosamyr was instrumental in this scheme as she used her abilities to influence the Power parents into willingly believing the white lie. [Power Pack (1st series) #44] 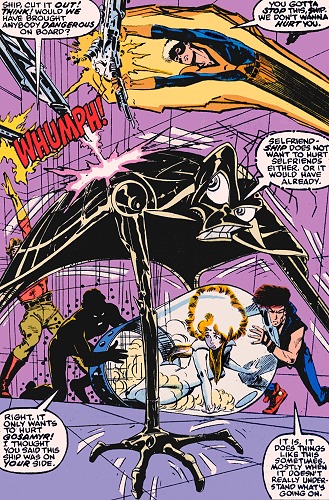 As the team returned to the X-Terminators, Gosamyr found herself involuntarily amplifying the emotions of the people around her once more, causing the two male members of the X-Terminators, Rusty and Rictor, to become enamored by her also, much to the chagrin of their partners. The two groups of mutant teenagers departed for Ship, the sentient home of X-Factor and the X-Terminators, but problems arose when Gosamyr tried to enter Ship, which recognized her true alien nature and placed her in a container, intending to gas her.

Sunspot and the other young men leapt to her defense, but Ship remained adamant that Gosamyr was a danger to them all. In fact, the young alien herself was worried that, due to the nature of her abilities, she would constantly cause fighting among the team and might eventually become just like her monstrous family.

When Mirage had begun to have visions of death, Gosamyr believed this was her influence and announced she would leave. Sunspot tried to persuade Gosamyr to stay, but she explained that they had all taught her to better herself and she 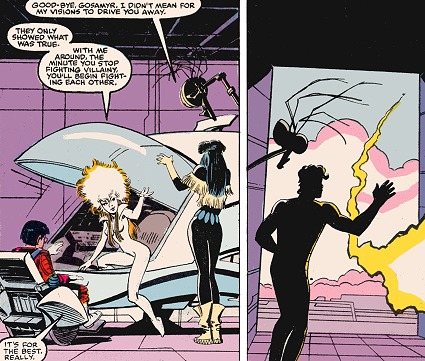 hoped this would come to pass. Ship informed  Gosamyr that, according to its databanks, there was a planet of mystics who taught others of her kind to control what they are, although it wasn’t sure if they still existed, nor if they would teach her. Once again being affected by Gosamyr’s alluring power, the assembled young men fought over which one of them would accompany Gosamyr to the stars, but she declared her intention to leave all by herself. As Ship provided her with a small space craft, Gosamyr said good-bye to her newfound friends, reasoning that her departure was for the best. [New Mutants (1st series) #74]

It remains unknown whether Gosamyr ever reached the planet of the mystics and, if she did, whether they agreed to teach her to control herself. Assuming this happened, one can only hope that Gosamyr matured and is making herself useful in the expanse of space. However, there is always the danger that her savage race could make their way back to Earth, and to the lives of the New Mutants.