After the Great Cataclysm and the fall of Atlantis and Lemuria, the surviving Deviants were forced to move underground to escape the wrath of their Celestial creators. In the new subterranean Lemuria, Deviants used genetic engineering to alter human slaves and make them more effective underground. These Subterraneans received exceptional strength and sensitivity to light. Two slaves, Gor-Tok and Thera, chaffed under Deviant rule and led a revolution among the slave caste. Gor-Tok founded his own kingdom of Sub-Terranea, humans living under the Earth. Some Gortokians left to form a separate civilization, thanks to the demon Cha'sa'dra who changed them into Lava Men. Others were killed in the wars against Lemuria who attacked them with new Subterranean slaves, artificial lifeforms fully engineered by the Deviants with no humanity to sway them. Still, the Gortokians persevered for thousands of years. [Avengers Annual #20]

In modern times, knowledge of the surface world had vanished from the recorded history of the Gortokians. War with the Deviants of Lemuria had long ago cooled into a tense détente, and King Krono wanted new conquests for his warriors, so he proposed searching for the mythical surface world. The king's prince was named Gor-Tok after his honored ancestor, and he was prepared to lead the armies of

Sub-Terranea along with his princess, Ingar. However, the humans unwittingly struck first with underground atomic testing, setting off a series of tremors that shook Sub-Terranea to its core. King Krono died in the quakes, while Ingar and the rest of the survivors perished soon afterwards due to atomic radiation left over from the testing.

Only Gor-Tok remained. The prince was dazed by the explosions, the radiation and the shock of 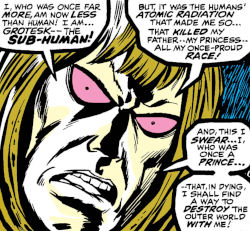 losing everything he had ever known. He wandered the underground caverns for a time as the radiation slowly transformed him, making Gor-Tok larger, stronger and misshapen. His aimless wanderings eventually brought him into the New York subway system, where he waylaid a train carrying Hank McCoy and Bobby Drake on a double date. The young X-Men changed to their identities as Beast and Iceman to investigate, and encountered Gor-Tok. The battle that followed helped awaken Gor-Tok's memories, and he recalled what had been done to his people. Realizing how much he had changed from the prince he had once been, Gor-Tok seized upon Beast calling him grotesque, and fashioned a new identity for himself as Grotesk the Subhuman.

With his faculties restored, Grotesk turned his hatred on all of humanity for causing the death of his people. He shrugged off the X-Men and began to pursue the source of a series of earth tremors shaking the caverns he walked. Grotesk discovered the existence of a nuclear oscillotron at Archer College, a device able to create artificial earthquakes. Grotesk planned to use the device in a suicidal last act to crack the Earth's mantle and destroy the planet, taking humanity 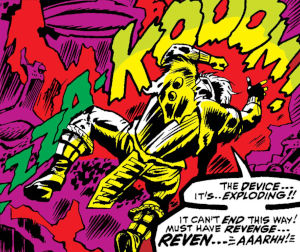 with him. The X-Men intercepted Grotesk and opposed him again, but not before he managed to turn on the oscillatron. As the apocalyptic chain reaction built, Grotesk delayed the X-Men from reaching the control panel and reversing his mad plan. Professor Xavier attempted to approach the oscillatron to take control of it, but Grotesk struck him down. In his insane fury, Grotesk tried to push the machine even harder, only to make it overload and cease functioning before its final devastating cycle could be completed. In the explosion that erupted forth, however, both Grotesk and Professor Xavier were seemingly killed. [X-Men (1st series) #41-42]

[Note: It would be several months before the X-Men learned Professor X was not dead. Xavier returned in X-Men (1st series) #65 to reveal the Xavier who died was actually Changeling, who had impersonated Xavier so that the real professor could prepare for the coming Z'Noxx invasion. Still, Grotesk remains responsible for the first death of an X-Man, and a lasting death at that.] 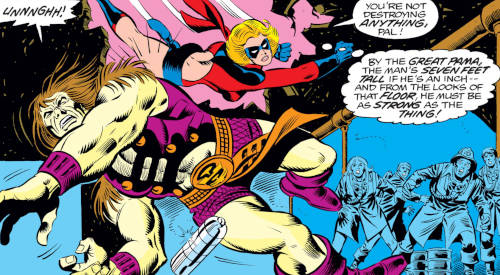 was opposed by Ms. Marvel. The two combatants fought fiercely, and Ms. Marvel briefly seemed to knock Grotesk unconscious. As the weary Kree warrior tried to secure the crystal, though, Grotesk recovered and overcame her, burying Ms. Marvel in the collapsing building as he made his escape. [Ms. Marvel (1st series) #6]

Grotesk located another facility on the coast, a radar station masking a laboratory experimenting with a powerful new laser cannon. He directed the laser at the cavourite crystal in the hopes of triggering an Armageddon that consumed all live on Earth. Ms. Marvel tracked down Grotesk and the crystal for a rematch. Ms. Marvel manipulated the laser to induce a warp core implosion in the crystal, collapsing inwards to annihilate a small area of space while leaving the rest of the world intact. Grotesk was seemingly consumed by the crystal's destruction as well. [Ms. Marvel (1st series) #8]

In fact, Grotesk survived and returned to the caverns of Subterranea. He eventually discovered a lost tribe of Lava Men. Many of the Lava Men had been transformed into a new golden state and moved on, but these Lava Men remembered their roots as Gortokians. Recognizing Grotesk as 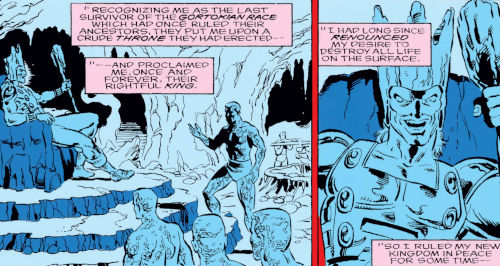 the last surviving member of the original Gor-Tok's royal line, they crowned him as the new king of the Lava Men.

In time, the Deviants of Lemuria organized under the warlord Brutus to once more strike against the Subterranean kingdoms that had rebelled against them and claimed their technology millennia ago. In addition to Grotesk's Gortokians and Lava Men, the Deviants' artificial slave races had eventually gone independent as well, forming the Moloid kingdom under Mole Man and the Tyrannoid kingdom under Tyrannus. Grotesk, Mole Man and Tyrannus formed an alliance against the Deviant purges sweeping through the subterranean caverns. After some of the Subterranean people broke through to the surface of New York while fleeing from Deviant soldiers, the Avengers were drawn into the situation as well.

However, while Grotesk claimed the burden of the crown had softened his hatred towards the surface world, he was still as nihilistic as ever. Grotesk believed Brutus and the Deviants could improve upon the Subterranean technology in ways the current kingdoms couldn't dream, and saw the opportunity to have a new oscillotron augmented by the Deviants to once again give him the means to destroy the world. Grotesk secretly prevented the Avengers from gathering reinforcements and rendered his own Lava Men mute like other Subterraneans so they could not 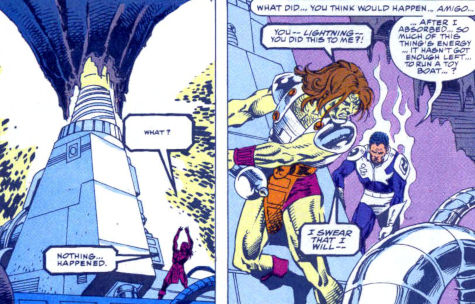 reveal his schemes. When the time came, Grotesk betrayed his allies and seized the Deviant-upgraded oscillotron. The Avengers were only mildly caught off-guard by his "surprising" behavior, however, and the Living Lightning managed to completely drain the oscillotron of power before Grotesk used the machine. The Avengers destroyed the oscillatron with Grotesk being struck down as well. [Subterranean Wars crossover]

Grotesk survived, though, and resumed command of the Lava Men. He acquired the Living Rock, a weapon the Lava Men once used against the surface world. Its atomic structure caused the rock to grow progressively in size, releasing shockwaves in the process. Grotesk and the Lava Men forced the tip of the Living Rock through the surface and planned for it to detonate when it reached critical mass, potentially destroying the entire surface world. Thor and the Godpack (artificially engineered "gods" evolved by the High Evolutionary) opposed Grotesk's plans. The sensitive Riger detected a weak point on the Living Rock, and Thor struck Grotesk with such force that he plummeted into the exact spot. An atomic implosion of sorts took place, causing the Living Rock to collapse inwards until it was once again the size of a mere stone, seemingly atomizing Grotesk in the process. [Thor (1st series) #481]

Or... not seemingly. This time Grotesk finally died from his schemes instead of escaping at the last minute. Despite this, some remaining loyal Lava Men used the magical knowledge they gained from Cha'sa'dra to find the means to resurrect Grotesk. A mystical armor was forged by the Lava Men that retrieved the essence of Grotesk from the afterlife and restored him to living form. He animated the armor and led his Lava Men in an attack on the X-Men, who had recently moved to 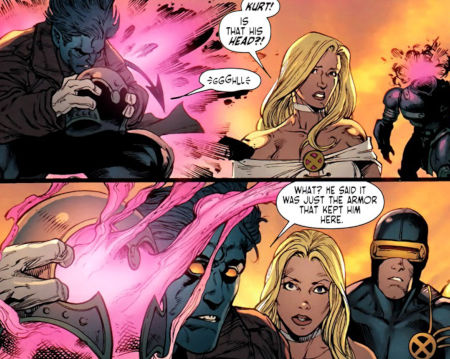 San Francisco. The force field generated by his armor was nearly impenetrable, and even deflected the teleporting spells of Pixie trying to reach him. Nightcrawler was able to teleport behind his guard, however, and ripped off Grotesk's helmet. Without the armor's full effect, the spell holding his essence together ended, and Grotesk dispersed into the winds. Grotesk will certainly not rest easily in the afterlife, however, unless the rest of the world one day follows him into oblivion. [X-Men: Manifest Destiny - Nightcrawler #1]