Detective Sean Bernard of the Vancouver Police Department had spent six years serving his country as a police officer when he became embroiled in an internal scandal involving several colleagues who were trafficking drugs. One evening after he had turned evidence into Internal Affairs, Sean’s fellow officers sought revenge on him and opened fire on him. Sean managed to take two out of the officers, killing them, but was shot in his leg. He was almost finished off by a third, until that officer was taken out by Wolverine, who was quickly proclaimed by the thankful Sean to be his new best friend.

Sean accompanied Wolverine to the prime minister's office, where Wolverine convinced the prime minister to transfer Sean, who had always a good cop, so that the deaths of the cops could be covered up. Sean explained that he wished to decline any transfers, but Wolverine told him that he belonged to the Canadian government now and didn't have any choice in the matter. 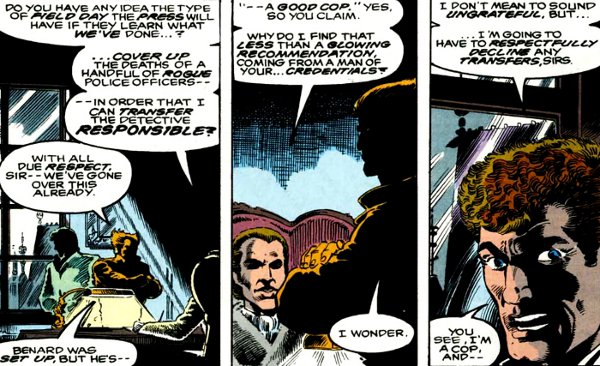 Later that night, Sean was taken by helicopter to a facility called Department H, at a secret location near Thunder Bay. Wolverine was very vague about the details, but Sean decided there was something inherently trustworthy about his “new best friend.” Nevertheless, Sean’s instincts told him that he was being watched and he was right, as James MacDonald Hudson and Dr. Walter Langkowski were keeping an eye on Sean via hidden cameras. Sean made his way to his quarters, where he discovered he had been assigned a roommate. Unable to sleep due to his roommate’s incessant habit of talking in his sleep, Sean went to find somewhere else to lie down, but instead came across a mysterious and naked woman walking the corridors of this facility. Narya, better known as Snowbird, welcomed Sean to “The Flight” and Sean found himself strangely attracted to the mysterious woman. The next morning, Sean met another two members of “The Flight,” first Saint Elmo and then his roommate, whom Sean now recognized as Alec Thorne, the self-proclaimed smartest man in the world. 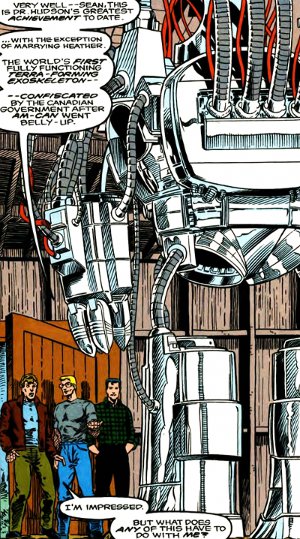 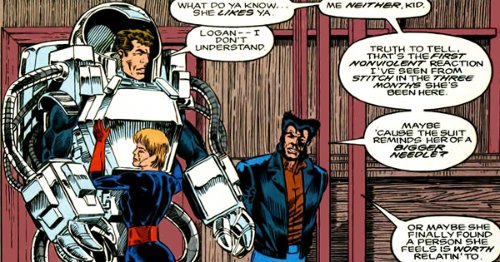 As the weeks passed, Sean underwent intensive physical training and learned that Canada was attempting to form its own version of the Fantastic Four, dubbed the Flight. He also met the man behind the dream of creating Canada's first super hero team, James MacDonald Hudson, who showed Sean a large battlesuit that he has constructed. Originally an exo-skeleton created for terra-forming, it had been confiscated when Am-Cam went bust. The impressed Sean was then shocked when he was told by Hudson and Langkowski that it was his to wear, as he had been drafted.

After a somewhat disastrous training session where Sean underperformed in the armor, Sean noticed that Wolverine and Hudson were arguing about something. He used the exoskeleton to monitor the vibrations of their conversation and could hear them arguing about someone called Jodi. When he realized they were motioning to the barn, the curious Sean entered it and found a young, autistic woman called Jodi, who was mentally controlling a needle and thread. Logan followed Sean into the barn and they were both surprised when Jodi hugged Sean. Wolverine supposed that she must see Sean, in the exoskeleton, as a larger needle. Sean, however was unconvinced that the Flight would be able to help Jodi and wondered if Hudson was prepared to sacrifice anything to see his dream come true.

Department H soon learned that the American criminal Egghead and his associates was going to launch a nuclear missile from the Canadian border to New York City. Even though the authorities had been warned that any attempt to stop him would result in the missile being deployed immediately, the Flight, led by Wolverine, attacked Egghead and his associates at the border. Wearing his battlesuit and now dubbed “Groundhog,” Sean was assigned to fly Smart Alec to the missile so that he could disarm it and fought both the Rhino and the Swordsman along the way. When Smart Alec was unable to diffuse the bomb, Sean started to dig a bunker so that the Flight would have some shelter when the missile took off. Though he was unable to dig fast enough to finish, Sean and his teammates were saved when Saint Elmo absorbed the energy from the missile, dying in the process. 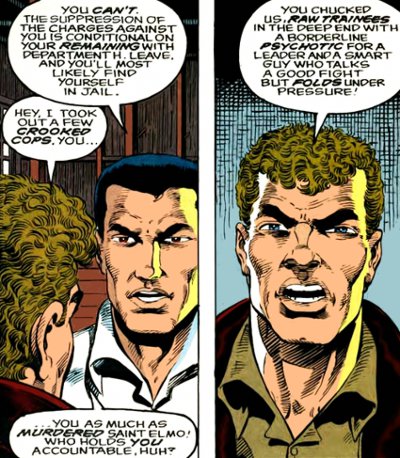 Afterwards, Sean angrily confronted Hudson. Throwing the Groundhog helmet at his feet, he told Hudson that the price of his dream was simply too high and quit the Flight before the team could really get off its feet. Sean further told Hudson that Wolverine was a psychopath who was not fit to lead a team and that Smart Alec too easily folded under pressure. They argued for some time, with Hudson warning Sean that he would likely go to jail if he left Department H. Sean refused to remain at Department H, even after Hudson listened to his advice and proposed a tiered training system. Sean told Hudson that if he wanted someone to wear that suit so badly, then he should wear it himself. [Alpha Flight Special (2nd series) #1]

Sean left Department H and never saw Hudson again. The charges against him for the deaths of his colleagues were never reinstated, and Sean rejoined the police force. He watched Hudson's dream from a distance and saw it become Alpha Flight. He continued to watch the story of Alpha Flight as the team changed over the years, and as Hudson bizarrely died, returned and died again. Sean’s battlesuit remained a constant during Alpha Flight’s existence, though in a streamlined form, worn first by James Hudson and others after him. The original Groundhog armor, though, was not seen again until versions of it were used by civilian supporters of Alpha Flight when the team was branded outlaws and were wanted by their government during a Reign of Fear.