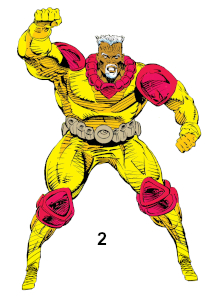 2) When he assembled Weapon P.R.I.M.E., Bridge adopted a special combat armor. This suit was yellow with red shoulder pads, kneepads, and neckbrace. He also wore a pocketed utility belt around his waist. [X-Force (1st series) #11]

3) As he rose in S.H.I.E.L.D.'s official command structure, Bridge was more commonly seen in a traditional S.H.I.E.L.D. uniform, a dark blue bodysuit with white highlights, belts, and holsters. A S.H.I.E.L.D. insignia was commonly displayed on his shoulder. [Wolverine Annual '95] 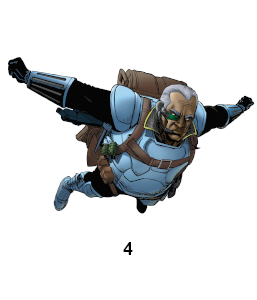 4) After G.W. Bridge reformed the Six Pack outside the normal S.H.I.E.L.D. regulations, he stopped wearing the traditional S.H.I.E.L.D. blues. This new look included a pale blue armored vest over a dark undersuit, as well as various adornments. In particular, a lens over his right eye provided a HUD of team data. [Cable / Deadpool #7]

-) Bridge later returned to active duty with S.H.I.E.L.D. during his investigations of the Punisher. During this period, he switched between casual wear during informal investigation activity and his S.H.I.E.L.D. blues for official field duty.