Hope’s destiny was in flux from the moment she was born. The Scarlet Witch’s Decimation spell wiped out all mutants across time and space, including alternate futures as scanned by Beast and Forge. Two futures in space-time containing mutants reactivated once Hope was born. One of those timelines was Bishop’s future, where the mutant race was rekindled at the cost of a million human lives. This led to the mutant concentration camps of Bishop’s childhood, and many mutants of his time blamed the messiah for their fate. Cable had the opposite view of the future and Hope’s destiny, believing she would save the mutant race. It was never entirely clear whether Cable was from the second timeline Forge detected, or if he simply had a longer view on history than Bishop, hailing from centuries in the future instead of mere decades. Cable also found a different future in Avengers: X-Sanction, where the Avengers apparently stopped Hope’s from achieving her destiny, but it led to nuclear winter and the devastation of the planet. 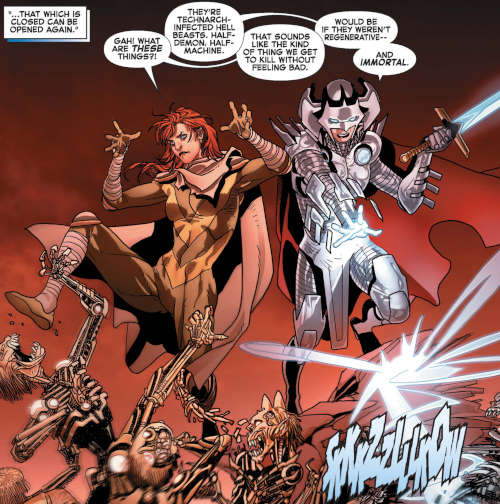 In one alternate future, Cable and Hope retired together after the Phoenix event. Cable tried to move past his soldier roots and live as a father, but a series of cataclysmic events struck the world while he was sitting on the sidelines. Decades later, Hope was one of the few survivors in a post-apocalyptic future, wearing Stryfe armor in a desperate attempt to survive a wasteland full of mutates, demons and techno-organic zombies. Hope joined forces with Cable’s old mentor Blaquesmith to rewrite the timeline for the better. They catalyzed a precognitive ability in “past” Cable by bombarding his mind with knowledge of these future threats. Thanks to the paradox engine in her armor, Hope was able to observe the timeline, slowly correcting itself as Cable and his new X-Force dealt with the cascading threats that made her future what it was.

In the Age of X-Man created by Nate Grey, Hope was a martyr to the mutant cause. His fabricated history told of how Hope and her team of X-Men sacrificed their lives using the Lifeseed to evolve the human race so that everybody would be born mutants. “The Resolution” (as it came to be called) made anti-mutant prejudice moot, and Hope was revered for her sacrifice in creating the modern utopia.