1) As a child, Hope wore whatever Cable could find in the various dystopias they called home. For a time, she wore a version of an X-Man costume – blue jumper, yellow gloves, boots and belt, and a red and black traditional ‘X’ buckle. [Cable (2nd series) #11]

2) As a teenager, Hope began wearing a skintight outfit whose colors matched Cable’s at the time. The origin of the suit is unknown: it may have been stasis garb intended for wear while in her suspended animation pod. The suit was basic blue with a series of yellow lines, shapes, and markings on the gloves and sides. [Cable (2nd series) #21]

3) Upon returning to the present, Hope adopted the attire that would stay with her for years to come. The basic outfit was a green bodysuit with two yellow ‘V’s descending around her neckline and lower stomach. (The open ‘V’ at her neck was occasionally drawn filled in and with ridges, hinting at the similar design for the original Phoenix costume.) Like her father, she had a tendency to accessorize. Hope frequently had a simple brown poncho or hoodie over her suit, with an assortment of straps, belts, pouches, pads, and other equipment worn over it as well. While occasionally shifting to another look out of circumstance, Hope typically reverted back to this costume as her default style. [X-Men: Second Coming #1]

4) When she claimed the Phoenix Force as her birthright, Hope adopted a version of the traditional Phoenix costume. The White Phoenix had a white bodysuit with golden opera length gloves, high boots, and a belt sash. She also had the Phoenix emblem on her chest and as a clasp for the sash. [Avengers vs. X-Men #12] 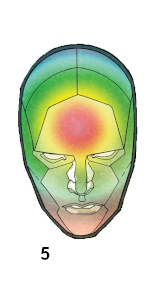 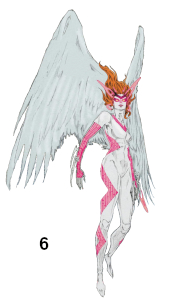 5) As Meme, Hope was copying the powers of a mutant datamorph from months, existing as a digital consciousness inhabiting electronic mediums. She communicated through a 3-D graphic wire image of a human face, cast in multiple colors. Thanks to Doctor Nemesis, Meme had a set of mobile drones she could inhabit in the field to interact with the team. [X-Force (4th series) #2]

6) When she copied the digitally-modified Volga Strain from Fantomex, Hope assumed a form similar to his altered appearance. Her skin turned white, with glowing pink circuitry patches as opera gloves on her arms and in the shape of ‘X’s on her body and legs. She had glowing opaque eyes, Psylocke’s telepathic butterfly effect, arm spikes based on Marrow’s bone protrusions, and a set of Angelic wings Fantomex had mimicked from Archangel. [X-Force (4th series) #14]

7) As a member of the Resurrection Five, Hope has modified her traditional outfit into the gold and dark blue colors common for the Five. Given her non-combat role now in society, Hope also has fewer weapons and pouches covering her suit (and finally got rid of that poncho). [House of X #5]