James continued working towards Utopia's defense, although he struggled with Kitty's pacifism. James reached out to Mach Two's more warlike faction, ensuring a mutual defense treaty with the rebels: regardless of their feelings about Kitty, they would stand with Utopia against outside oppression. James' actions were not entirely his own, however... no one's were. A Mothervine infiltrator had been with Utopia from the beginning, posing as Psylocke and using her telepathy to remain unnoticed. Psylocke was actively agitating the various factions to subtly bring about Utopia's ruin, from isolating Mach Two's faction to prodding the nearby military bases. When Congress attempted to override President Captain America's executive order and reclaim Utopia's land, Psylocke was there to provoke the Army to start shooting and push James to ensure a militaristic response from Utopia. Mothervine's efforts to undermine and destroy Utopia failed only when Psylocke was killed and her influence faded from all those involved. [Ultimate Comics X-Men #24-28]

Despite learning about Psylocke's influence, James still decided he wasn't cut out for Utopia. The pacifist lifestyle Kitty was championing didn't suit him, and he couldn't maintain his relationship with Kitty or act as a good representative of Utopia as a result. James traveled to Tian, a second 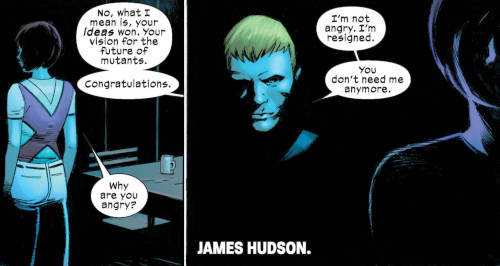 mutant city-state established in southeast China by the brothers Xorn and Zorn before being inherited by his old friend Jean Grey. Jean had been spying on Utopia on behalf of Tian during the Psylocke incident and was responsible for defeating the imposter. Still, she and Kitty parted at odds with one another, each insisting mutantkind had only one true homeland. James journeyed to Tian in part to maintain peaceful relations between the two nations. Jean had grown haughty and arrogant as the undisputed mistress of Tian, however, and her ego saw Kitty as a personal threat and an insult to her nation's supremacy. She launched several attacks on Utopia, despite James' counsel for peace.

James and Jean developed a personal relationship, but he was unable to sway her towards an end in hostilities. Instead, Jean provoked James to a berserker state and unleashed him in Tian. When he was beaten and captured, she claimed publicly that Utopia had sent an assassin to Tian, using it as further political capital to continue her petulant war with Kitty. Jean had now gone too far and Kitty ordered the destruction of Tian. Several mutants on Utopia combined their powers to create a natural rail gun capable of launching massive projectiles across the world at supersonic 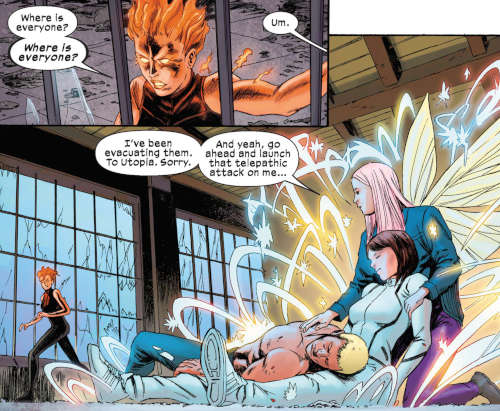 speeds. As Kitty fought Jean directly, Jean's own Ultimate X team freed James and helped teleport citizens of Tian to Utopia, saving the population before the entire floating island chain was devastated by Utopia's bombardment. A humbled Jean Grey was brought to Utopia with her telepathy dampened, and James (calling himself Jimmy again) reunited with Kitty. World War X was over. [Ultimate Comics X-Men #29-33]

When Galactus ravaged the Earth, Kitty Pryde was recruited by S.H.I.E.L.D. and the Ultimates as a major part of their plan to counter-attack. Kitty became the hero of Earth to the media, swaying the public towards better support for mutants. [Cataclysm crossover] Jimmy took a leave of absence to visit the Savage Land, but came across some curious visitors: the dead X-Man named Angel and a woman with claws and a cranky disposition that were oddly familiar. Jimmy reunited with the X-Men and they soon learned these visitors had crossed over from the same reality as Galactus. The X-Men of two worlds united to get everyone back to their proper place and time. [All-New X-Men (1st series) #32-36]

The time came when all of reality ended as a result of the Incursions. Earth-1610 and Earth-616 collided with one another as the final dimensions in the multiverse, bringing an end to all that is. Almost. [Secret Wars #1] For a time, there was only Battleworld, until Reed Richards gained the power of creation and restored the multiverse in a new form. Jimmy Hudson was one of several beings from Earth-1610 who fell through the cracks in reality as it reformed and ended up on the restored Earth-616. [X-Men: Blue #1]

Jimmy had no memory of his former life when he arrived. Confused and disoriented, he was captured by Miss Sinister, along with his Earth's versions of Guardian, Quicksilver, Armor and Mach Two. Miss Sinister attempted to rebuild their minds to create personalities loyal to her as the New Marauders, but Jimmy demonstrated a natural resistance to telepathy that prevented her from controlling him as she liked. He escaped into the Canadian wilderness and lived in the wild for some time, not knowing anywhere else to go. Miss Sinister allowed him to leave at first, since she had already extracted the secret of Mothervine from his genetic code.

The time-displaced original five X-Men came searching for Jimmy after picking up a strange reading on their Cerebro. They found him fighting a Wendigo alongside a local sheriff. The group recognized Jimmy from their previous encounter, but Jimmy's memories were too damaged to 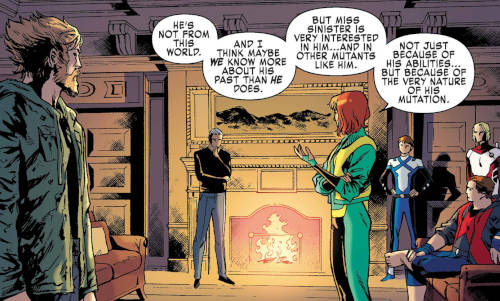 recall them or his home reality. Miss Sinister sent out her Marauders to try to collect Jimmy once he turned up, but she wasn't prepared for a full scale battle with the X-Men yet. Consequently, she ended the fight and left Jimmy in the X-Men's care. Jimmy eventually came to regard the X-Men as friends, and agreed to return home with them to Madripoor. [X-Men: Blue #4-5]

Jimmy's amnesia proved to be an issue as he tried to fit in to this new reality. The local Jean Grey felt attracted to Jimmy, causing some tension between him and his teammates, Cyclops and 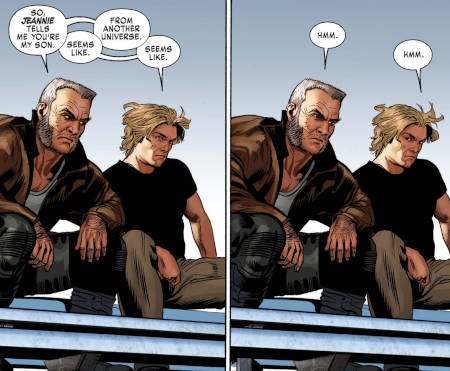 Beast. He also found it awkward trying to get along with Old Man Logan, the alternate future version of this reality's alternate dimensional version of his father. In exploring his past, Jimmy also discovered that Mothervine and the artificial nature of mutants in his reality were very similar to this reality's Mutant Growth Hormone genetic drug. Jimmy struggled to remember what he knew about Mothervine before Miss Sinister could use it for nefarious purposes. [X-Men: Blue #6-15]

Jimmy and his dimensionally-displaced teammate Bloodstorm were on a reconnaissance mission for Magneto looking into Mothervine when the original five left for space to rescue Cyclops’ father and the Starjammers from raiders. Consequently, they remained behind to deal with the rise of Mothervine alone. Miss Sinister and her allies distributed the Mothervine virus around the world, activating latent mutants, restoring previously Decimated mutants and causing secondary mutations. The Mothervine protocols also allowed Miss Sinister to remotely control the mutants altered in this manner.

Jimmy blamed himself for what the villains were able to do with Mothervine and vowed to take responsibility for stopping it. With the help of Polaris, he and Bloodstorm recruited a new team of X-Men to stand against Mothervine, including his "brother," Daken. The X-Men fought their 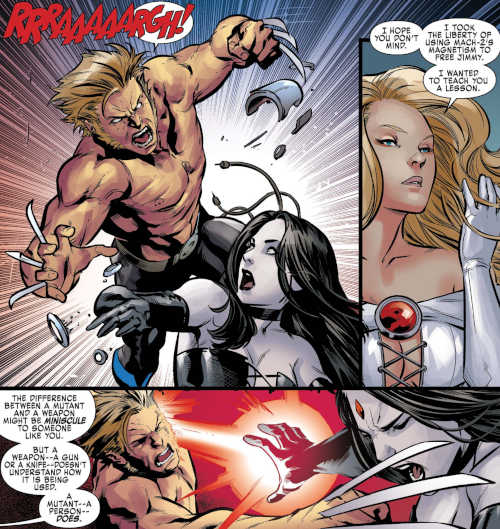 adversaries, but fell before the combined might of the inverted Havok, the Hellfire Club and Bastion's Sentinels. Jimmy came under the knife again as Miss Sinister tried to extract more Mothervine from his bloodstream. When Emma Frost could no longer stand the amorality of the Mothervine alliance, though, she freed Jimmy to take revenge on Miss Sinister and stood by the other X-Men. They defeated the remaining perpetrators and eradicated all traces of Mothervine, both from the laboratories and inside Jimmy's system. [X-Men: Blue #23-28]

The original five returned from space with a threat in tow: the extra-dimensional menace known as the Poisons. These Poisons were the natural predator of Klyntar symbiotes, such as the one bonded to Venom. A nascent Poison could absorb a symbiote and its host on contact, killing both entities and assimilating their traits and abilities to create an adult Poison with all their memories and attributes. The Poisons deliberately force-bonded many heroes of Earth with symbiotes in order to make food for their young. Jimmy was one of their victims, bound to a symbiote and then consumed by a Poison, turning him against his friends and making him a part of the Poison's Hive. Jean Grey was also assimilated, but she managed to fight off the process and restore herself to normal, then killed the Poison Queen to bring an end to the Hive and its invasion. [Venomized #1-5]

Somehow, the Jimmy-Poison survived when nearly every other Poison died with the Queen and its Hive. He struggled with his sense of identity, as the transition into a Poison unlocked all of Jimmy's memories of his home universe. He could remember being Jimmy, a Klyntar and a Poison, and couldn't reconcile which identity was the real one. Jimmy went on the run at first, and 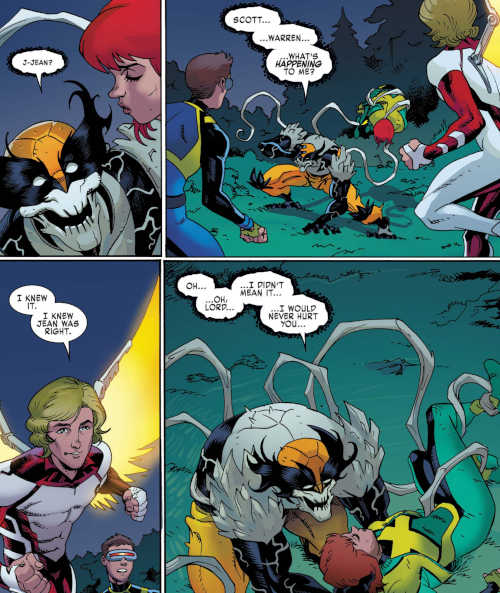 the X-Men pursued him to determine if he was a threat. When confronted, Jimmy lapsed into the alien's mindset, calling himself Poison. Jean was insistent she could reach Jimmy's true self, especially after what had happened to her, but the other X-Men were doubtful. So was Magneto, for he sent Daken to eliminate Jimmy, no questions asked. The X-Men stopped Daken from killing Jimmy and Jean ultimately made the call to let Jimmy go free, trusting that he would find his way back to the team. [X-Men: Blue #29-30]

Jimmy never did return to the original five X-Men's team before they went back to the past. Poison did watch over them, though, preventing Sebastian Shaw from taking revenge on Scott and Jean after the Mothervine crisis. For the moment, Jimmy Hudson seemed to be in command of Poison. Who will be in charge the next time he shows his face remains to be seen. [X-Men: Blue #36]