Connection to the geospatial
bio-sphere mutated him into an
amalgam of human tissue,
sediment, and plant matter,
linked to the planet itself
while fueled by the
electro-encephalographic
patterns of the human race, causing him to snuff out
human life randomly anywhere on the planet while
demonstrating control over tectonic plates and seismic activity, the accelerated growth and manipulation of vegetable life, repulsive force affecting non-organic matter (allowing him to levitate himself or blast objects away from him), and deconstruct the atomic bonds of any synthetic matter not strictly found in nature 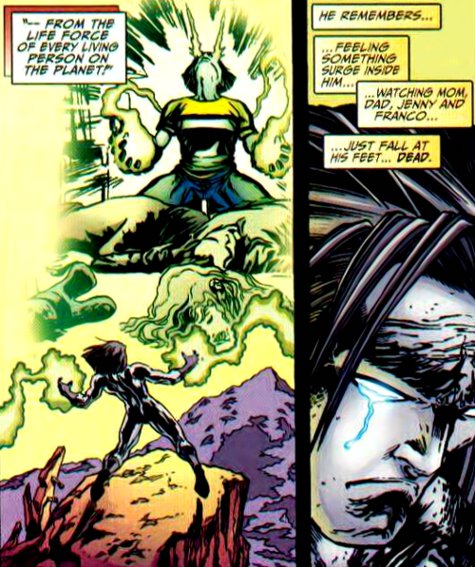 Sonny Baredo grew up in Pittsburgh, Pennsylvania, living a relatively normal childhood with his parents and his sister. When he turned fourteen, however, Sonny's entire family dropped dead from an unexplained malady. The sole survivor, Sonny, was found by Charles Xavier and the original X-Men, who informed him he was a mutant. Although Xavier wanted to offer Sonny a place with the X-Men, he seemed reluctant to bring Sonny back to the mansion immediately until the nature of the boy's power could be determined. Therefore, Professor Xavier allowed Sonny to be placed with the foster care program first, and planned to negotiate with them to enroll Sonny in the School for Gifted Youngsters once he was situated.

Xavier's hesitation proved to be Sonny's undoing. The mutant terrorist organization named Factor Three kidnapped Sonny while he was in transition. Factor Three was still an underground group at the time, and Xavier and the X-Men never found out what happened to the young mutant. Factor Three ordered a human scientist in their employ, the Ogre, to subject Sonny to invasive tests and experiments designed to gauge his powers and force them to their full potential, by any means necessary. Despite his brilliant scientific mind, Ogre was weak-willed and chronically unassertive. Shortly after Sonny was captured, Ogre was sent on a field mission for Factor Three and failed. His masters ordered him to remain at their Mount Charteris base in Colorado, and he did so for years, long after Factor Three was defeated by the X-Men and went defunct. Without any new orders, Ogre resided in Mount Charteris and continued the experiments on Sonny. 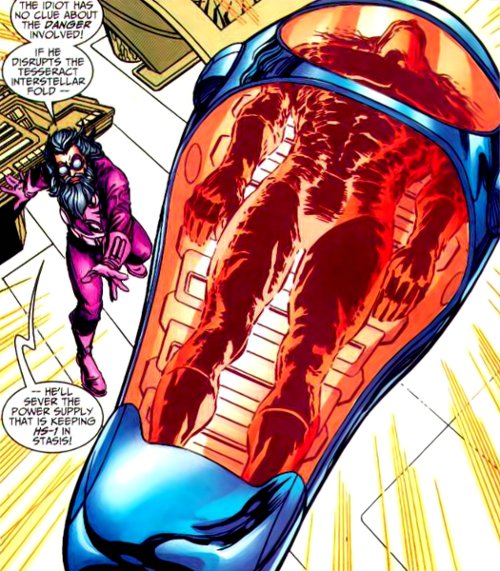 By eighteen, Sonny's powers were reaching unprecedented levels. His physiology had reformed itself into a new form of life, mixing plant and earth materials with human flesh. He demonstrated Omega-level power over geological principles, and could absolutely annihilate anything of artificial origins such as plastics, processed metal or synthetics, completely warping them out of reality. The most frightening aspect of his abilities, however, was their source: his connection to the geospatial bio-sphere was fueled by the electro-encephalographic patterns of the human race. In order to use his powers, Sonny drained the collective life force of humanity, randomly killing people around the entire globe every time. Ogre determined that Sonny now classified as a new form of life and christened him HS-1, or Humus Sapien. Recognized that Sonny was, without hyperbole, a threat to every living being on the planet, Ogre encased him in a cryogenic suspension chamber, and dedicated his lonely existence to making sure Humus Sapien never emerged from his stasis. [Thunderbolts (1st series) #55]

Humus Sapien and Ogre remained undetected for many years. The Mount Charteris base was re-occupied several times by clandestine forces, including HYDRA, the Sons of the Serpent, August Masters, SHIELD and the Masters of Evil. After HYDRA shot at him when they first arrived, the Ogre kept hidden in the deeper recesses of the base. When the heroic Thunderbolts took over the base from the Masters, Ogre took a liking to them and eventually revealed himself to the group. Immediately thereafter, however, the treacherous former T-Bolt called Techno knocked out Ogre and used his morphing abilities to assume Ogre's place on the team. Techno put Ogre in cryo-sleep as well, and took up care and maintenance of HS-1 without ever bothering to learn who was inside the cryo-pod. [Thunderbolts (1st series) #33]

Any curiosity Techno may have had about the pod was waylaid when his teammate Jolt was killed. Techno secretly harvested Jolt's body from the morgue and preserved it in the cryogenic chambers to study her bio-electric output. His experiments stimulated Jolt's residual bio-electric energies and accidentally restored lifesigns inside her pod. This development kept Techno occupied until the assassin Scourge infiltrated Mount Charteris on his mission to eliminate the Thunderbolts. Scourge killed Techno and his teammate Atlas, while at the same time bringing Jolt out of her pod and back to life. [Thunderbolts (1st series) #34-47] 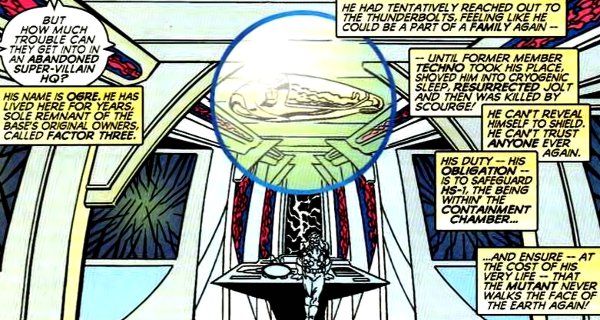 Techno's death allowed Ogre to emerge from cryo-sleep. With SHIELD agents swarming Mount Charteris after Scourge's conflict with the Thunderbolts, Ogre chose to abandon the base and moved HS-1 deeper into tesseracted space to ensure he remained hidden. This spatial warp brought Ogre and HS-1 to a starbase in the Omega Centauri stellar cluster, light-years from Earth but still tethered to the Mount Charteris generators for a power supply. [Thunderbolts (1st series) #48-49]

Unfortunately for Ogre, SHIELD maintained a presence at Mount Charteris after the Thunderbolts disbanded, hosting their Redeemer program that replaced the T-Bolts. One of the Redeemers was P. Norbert Ebersol, the Fixer who had been the human template for Techno. His curiosity piqued by the HS-1 references found in Mount Charteris's databanks, the Fixer began hunting for Ogre as an intellectual exercise. 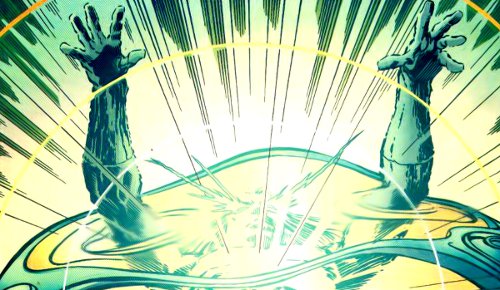 Fixer located the tesseract space Ogre was hiding in, and disrupted the umbilical power supply linking it back to Mount Charteris's generators. In his arrogance, Fixer ignored Ogre's warnings about HS-1 and continued to fight Ogre's efforts to reclaim power for the suspension chamber in order to prove he was the smarter technician. Eventually, Ogre's efforts failed completely -- HS-1 was drawn back into normal space and awakened inside the pod. Humus Sapien was unleashed on the Earth's bio-sphere again. [Thunderbolts (1st series) #53-54]

Sonny's years in confinement had warped his mind. His geological connection to the bio-sphere caused the Earth to "speak" to him, leading him to believe he was the chosen defender of Mother Earth against the "Blight" that was humanity. Reacting instinctively upon his release, Humus Sapien held off the entire Redeemers team before burying them in the atomically deconstructed remains of their Mount Charteris base. 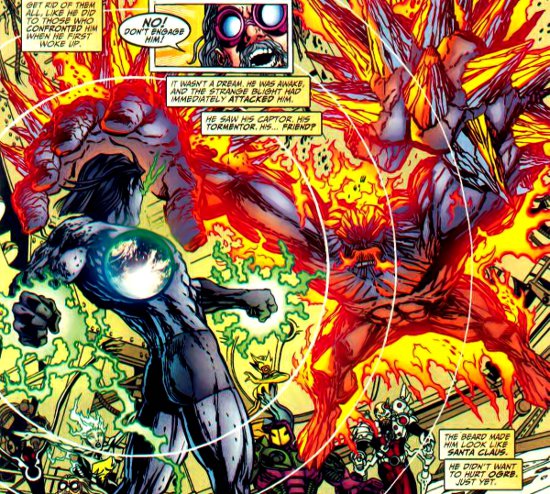 Over the next four hours, Humus Sapien walked the Rockies as he tried to distinguish his own desires from the impulses pressed upon him by his powers. And over those four hours, 2,400 people dropped dead around the world as Sonny's powers reflexively claimed their lifeforces.

The Redeemers were at a loss for how to stop him -- Humus Sapien was almost impossible to kill, and the more he fought back against any attack, the more people who would die the world over. 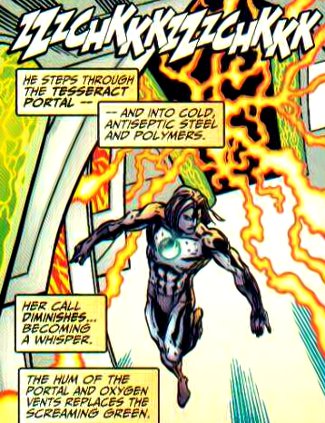 Ogre hoped to recharge the tesseract generator and get Sonny off-planet, but Humus Sapien had deconstructed Charteris's power sources, and the Redeemers couldn't generate anywhere near the energy necessary.

Humus Sapien returned, his mind clear enough to recognize the deaths on his hands, and Ogre convinced him to help refuel the tesseract. Using the energies he had already "powered up" with, Sonny reactivated the spacewarp and prepared to exile himself to a distant galaxy in order to sever his connection to the Earth and the threat he posed to humanity. Although Humus Sapien intended to remain in exile alone, Ogre still felt responsible for triggering the boy's out-of-control powers to start with. As the tesseract gateway closed, Ogre threw himself through the portal, accompanying Sonny on his journey so that the two men could make amends, and face the isolation together. [Thunderbolts (1st series) #55] 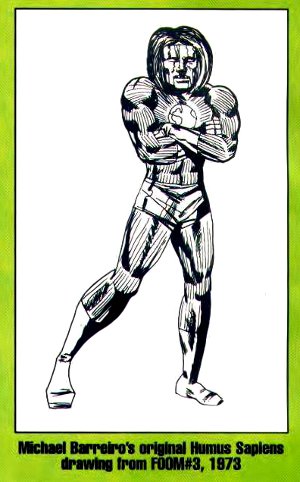 The year was 1973. Friends Of Ol' Marvel (or FOOM) was a fan magazine run by Marvel Comics. The first issue of the magazine had a Create-A-Character contest, offering fans the opportunity to create an actual Marvel super-villain who would appear in an upcoming comic. By FOOM #3, a winner was declared: Michael Barreiro and his villain, Humus Sapiens. FOOM #4 had an update on the winner, saying that the character would no longer be a villain. Instead, Humus Sapiens would soon be debuting as a founding member of the All-New, All-Different X-Men in the upcoming relaunch of that title...Giant-Size X-Men #1.

As many of you may know, there was no Humus Sapiens in Giant-Size X-Men #1. The reason why is lost to the ages, but Humus Sapiens never made his promised debut. Cut to more than 20 years later, when a new Create-A-Character contest run through Wizard produced the Thunderbolts villain (and later member) Charcoal the Burning Man in Thunderbolts (1st series) #19. Charcoal's introduction got the writers and editors talking about Humus Sapiens again, and wheels were set in motion to finally introduce the character. The "mysterious pod" subplot carried over more than two years and two different writers in Thunderbolts. They even contacted Michael Barreiro, now a professional illustrator, and brought him on board for the project. Barreiro got to ink the splash page in #54 where Humus Sapien first emerged.