• Visualize the genetic structure of living things
and then induce spontaneous mutation with a touch
• With humans, her touch creates "Anti-Bodies",
monstrous henchmen susceptible to her desires
who develop super-powers (strength, size-changing,
bio-blasts, gills) but are genetically unstable and
disintegrate over time

Infectia, whose only other known name is Josephine, was born to a wealthy geneticist who worked out of a personal laboratory located inside their home in a brownstone in New York. Josephine used to spend time hanging around the lab while her father worked and eventually developed an understanding of how the various tools in the lab operated. When her father passed away, she inherited his lab, brownstone and fortune, and immediately dropped out of high school. Her knowledge about genetics, which she picked up from spending time in her father's lab, helped Josephine understand her mutant power to alter living things on a cellular level. [X-Factor (1st series) #29]

When Apocalypse and his Horsemen attacked New York, they were defeated by X-Factor, who inherited by default the villain’s extraterrestrial ship. Infectia, however, impulsively decided that the vessel should be hers. She also centered her affections on X-Factor member Iceman, on whom she had developed a crush from afar. 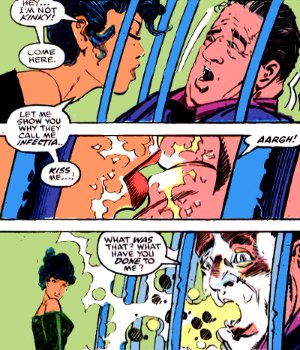 At a bar, she met a man who was jealous when she showed interest in the mutant hero, and expressed an idle desire to be a mutant himself because it seemed to attract women. Infectia left the bar with the man and took him back to her lab, where she used her power to alter his genetic structure. Though the process was a success, the mutate’s newfound abilities soon burned out and he died, reduced to ashes in the process.

Like a scientist, Infectia continued her experiments, returning to the same bar multiple times for new recruits as she refined her process. Several men later, Infectia brought her devoted and seemingly stable henchmen to the Manhattan pier where Ship, as X-Factor’s vessel was now called, was located. There, Infectia sent her "Anti-Bodies" onto Ship, where they engaged X-Factor in battle. However, like her earlier subjects, the men exerted themselves too much and burnt out, dying. Annoyed but not ready to give up on her mission to claim Ship as her own, Infectia, still watching from a distance, set her sights on using Iceman. [X-Factor (1st series) #28-29]

As Infectia continued to observe Iceman and X-Factor from afar, she began to wonder what would happen if she mutated someone whose genetic code had already been mutated. Happening across a police officer with a grudge against mutants, Infectia mutated him with a kiss and convinced him that he must arrest Iceman. Knowing that her mutate would be no match against the hero, Infectia employed a different tactic and rushed into the restaurant in which Iceman was dining, claiming to seek refuge from a monster that was chasing her. When the mutated and monstrous-looking officer arrived to make his arrest, Infectia’s tale seemed confirmed. 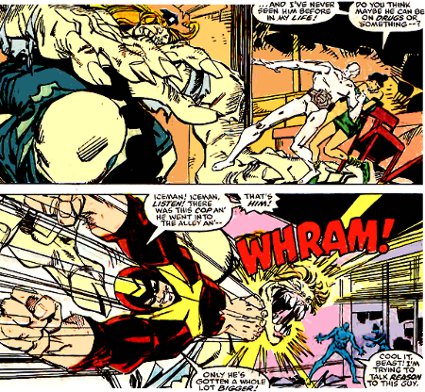 Recognizing the “officer” as being similar in appearance to the “Anti-bodies” from earlier, Iceman made a comment as to their eventual disintegration. Still having some of his wits despite his mutated mind, the officer asked Infectia if that would happen to him. However, the apparent damsel-in-distress played dumb and the mutated officer’s body continued to deteriorate until it exploded. Infectia’s ruse was almost exposed by the arrival of the Beast, who attempted to inform his teammate that he had witnessed Infectia’s transformation of the officer earlier. However, suffering from a viral regression in which his intelligence was being continuously reduced, the Beast was unable to articulate what he wanted to say.

Her plan a success, Infectia left the restaurant with an enamored Iceman and an untrusting Beast. As they walked past a florist, Infectia demonstrated her ability to change the molecular structure of some flowers as she kissed a bouquet of roses, causing them to increase in size. As they caught a cab, Infectia continued to play down the Beast's attempted accusations by pointing out that the Beast was clearly confused. She also used her feminine charm to woo Iceman, asking him if X-Factor could train her and even suggesting that she may be able to use her power to cure the Beast, having heard about how he lost his intellect. 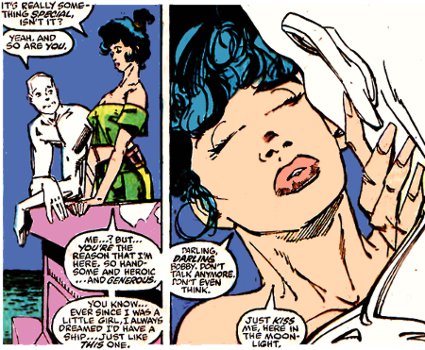 Arriving at Ship, Infectia acted condescendingly towards the X-Factor trainees, who were not that much younger than she. Infectia practically yanked Iceman away from the youths when he introduced her to them, seeing them as an irritation. The two soon found some private space on Ship, where Infectia innocently told Iceman that ever since she was a little girl she had dreamed of having as ship just like this one. With that, she started to kiss him. [X-Factor (1st series) #30]

Luckily for Iceman, the kiss never happened, as the suspicious X-Factor trainees started to separate the two, doing everything they could to keep Infectia away from Iceman. Even Ship joined in on the action, slamming the door to Infectia's guest quarters just before Iceman started to enter. The next morning, Infectia and Iceman left Ship for Infectia's brownstone – where she pushed Iceman into power-blocking restraints. There, she demonstrated her ability to mutate regular humans into Anti-Bodies, by kissing another man that she had prisoner in the lab. Unfortunately for Infectia and her dream of having Ship for herself, the Beast dropped through her lab skylight and battled the Anti-Body until it wore itself out. 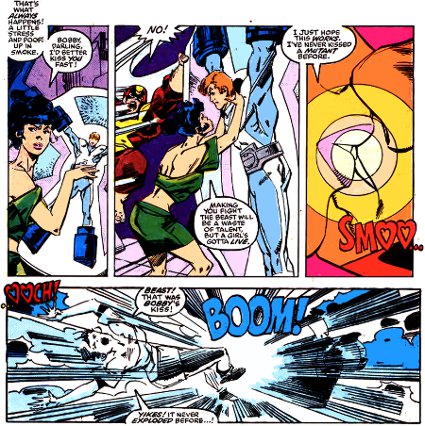 Infectia took this opportunity to try and kiss Iceman once again, still curious as to what would happen when she kissed another mutant. However, inches from Iceman's lips, she found herself lip-locked with the Beast instead, who had dashed between the two. This resulted in an explosion and, as a dejected Infectia skulked off into her lab, she left the now free Iceman to check on the Beast, who began shifting back into his blue furry form. Though completely unintentional, the Beast did indeed eventually regained his intelligence as a result of Infectia's kiss. [X-Factor (1st series) #31]

Infectia kept a low profile in the months that followed, though through unexplained circumstances she sought out Mesmero and hired him to get revenge on the Beast. As part of this plan, Mesmero tracked down the Beast's old girlfriend, Vera Cantor, who was put in grave danger. All the while, Infectia watched the Beast's plight from a safe distance. Although the Beast succeeded in keeping Vera safe, Infectia's part in this misadventure was never made known to him. Frustrated, Infectia lamented Mesmero's failure and commented that she had plans for Beast, once she had captured him. Nevertheless, Infectia hoped she would have better luck next time. [X-Factor (1st series) #55]

Unfortunately for Infectia, she didn't have better luck next time, as in the following months she became one of the first mutants infected with the Legacy Virus, a deadly pathogen released by the madman Stryfe. 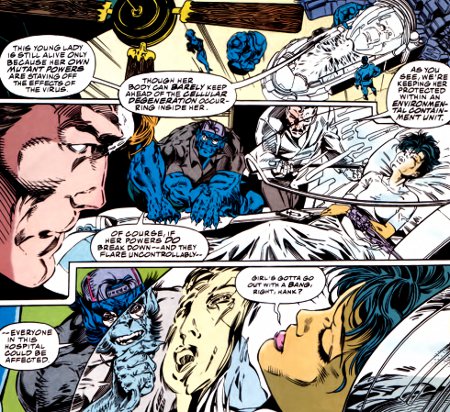 Infectia had one advantage against the virus in that her own mutant powers were able to stave off the effects. Given the time to search for her own solution, she ventured to Los Angeles and sought out a bio-researcher named Gordon Lefferts, unaware that he had already passed away from the virus, and in fact had been its first victim. Infectia was admitted to a hospital, where she managed to call the Xavier Institute. Beast, Iceman and Rogue journeyed to LA to be at her bedside, where they were introduced to Dr. Nathan Milbury, who took some samples from Infectia.

Knowing she was going to die, Infectia asked the Beast and Iceman to take her out of the hospital so she could see the stars, the moon or a sunrise. Instead, the X-Men took some time to try and track down Dr. Lefferts, which led them to another encounter with Dr. Milbury – in his true guise of Mr. Sinister. The mad geneticist informed them that he too wanted to put an end to the Legacy Virus, but at the moment had no cure. 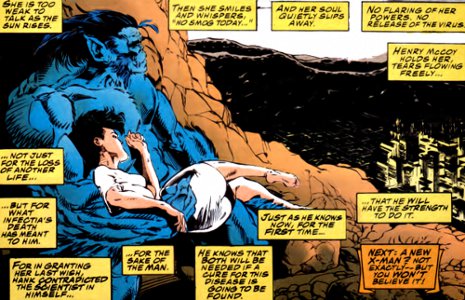 Though the X-Men returned to her empty-handed, the Beast granted Infectia her dying wish by sneaking her out of the hospital to watch the sun rise. Infectia's death helped give the Beast the strength to find a cure for the deadly virus, which he eventually did. [X-Men (2nd series) #27]