Located somewhere in the Pacific Ocean and surrounded by homegrown Krakoa islands, the Hellfire Academy was a twisted version of the Jean Grey School, where teachers such as Mystique and Sauron attempted to groom young mutants into becoming ruthless super villains and where Quentin’s trademark disrespect towards teachers was met with brutal punishments. Despite the dangers that surrounded them, Quentin put his safety on the line to help Idie find Broo’s attacker. To do this, Quentin got into enough trouble so that he was sent to see Kade Kilgore himself. Face to face with the young Black King of the Hellfire Club, Quentin learned that the Hellfire Academy was all part of 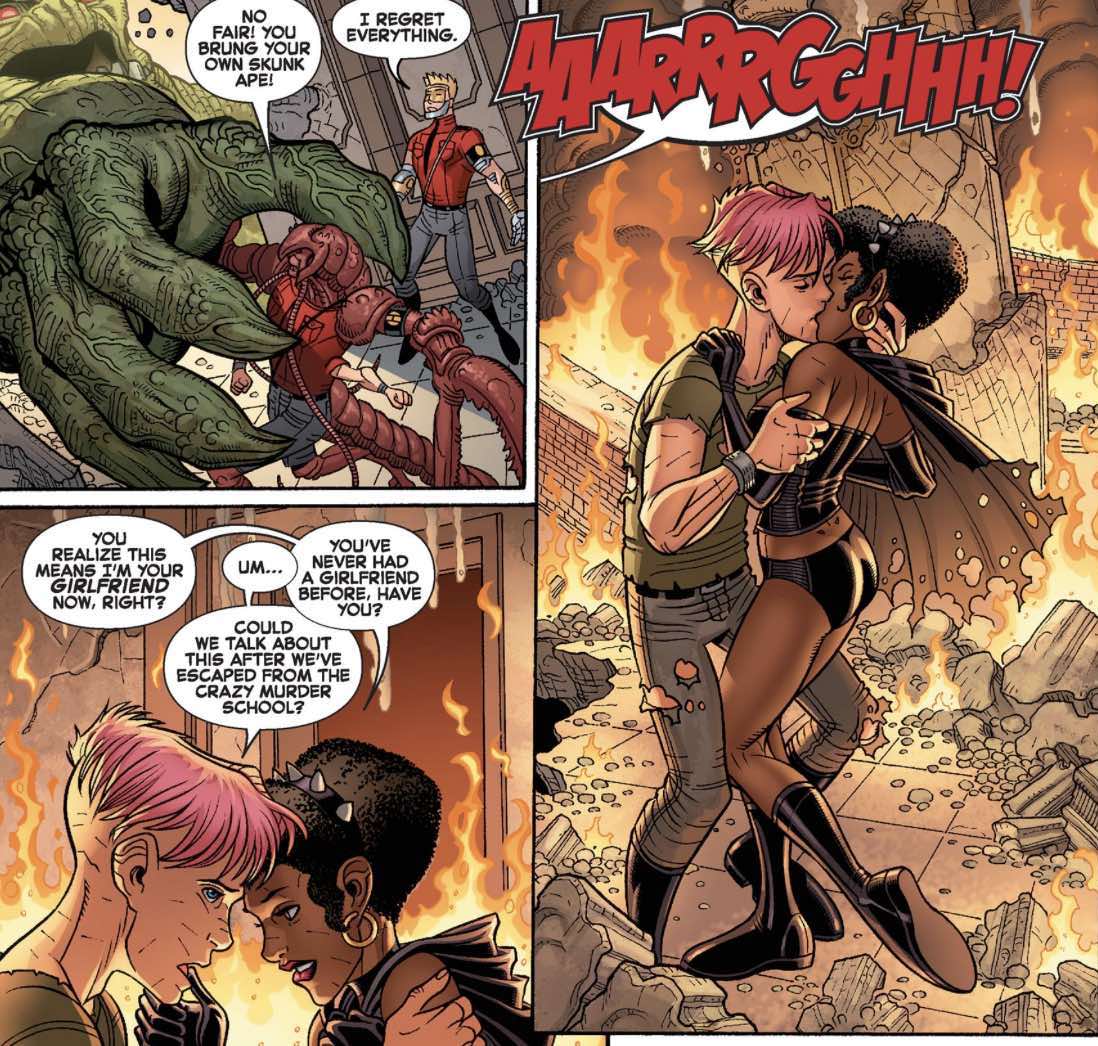 Kade’s ongoing efforts to increase Sentinel sales by creating new mutant super villains and that the students would be forced into the Siege Perilous to transform them into better, more formidable versions of themselves. Quentin was pushed into the strange device and was violently rejected from it, something the object’s caretaker, the Philistine, said had not occurred in five thousand years.

Chained up in the dungeon, Quentin was tortured in turn by many of his teachers until Toad, who had also abandoned the Jean Grey School and followed his heart to the Hellfire Academy, saved him. Meanwhile, Idie discovered that it was Kade who shot Broo but, when she had the chance to murder him, she had a change of heart and instead fought alongside Quentin and Toad to escape. The X-Men finally arrived and in the middle of the intense battle that ensued, Quentin and Idie passionately kissed and decided to be with each other. When the dust settled, Kade was defeated, the Hellfire Academy was destroyed and Quentin returned to the Jean Grey School with his new girlfriend. Additionally, for the first time in his life, felt like a hero. [Wolverine and the X-Men (1st series) #31-35]

While his snark and abrasive personality remained intact, Idie and the events at the Hellfire Academy did seem to have an effect on Quentin’s view of superheroes. Quentin became more active in X-Men missions, assisting the team against the threat of Arkea and even helping Wolverine save a herd of elephants in South Africa. [X-Men (4th series) #6-12, Savage Wolverine #12-13] 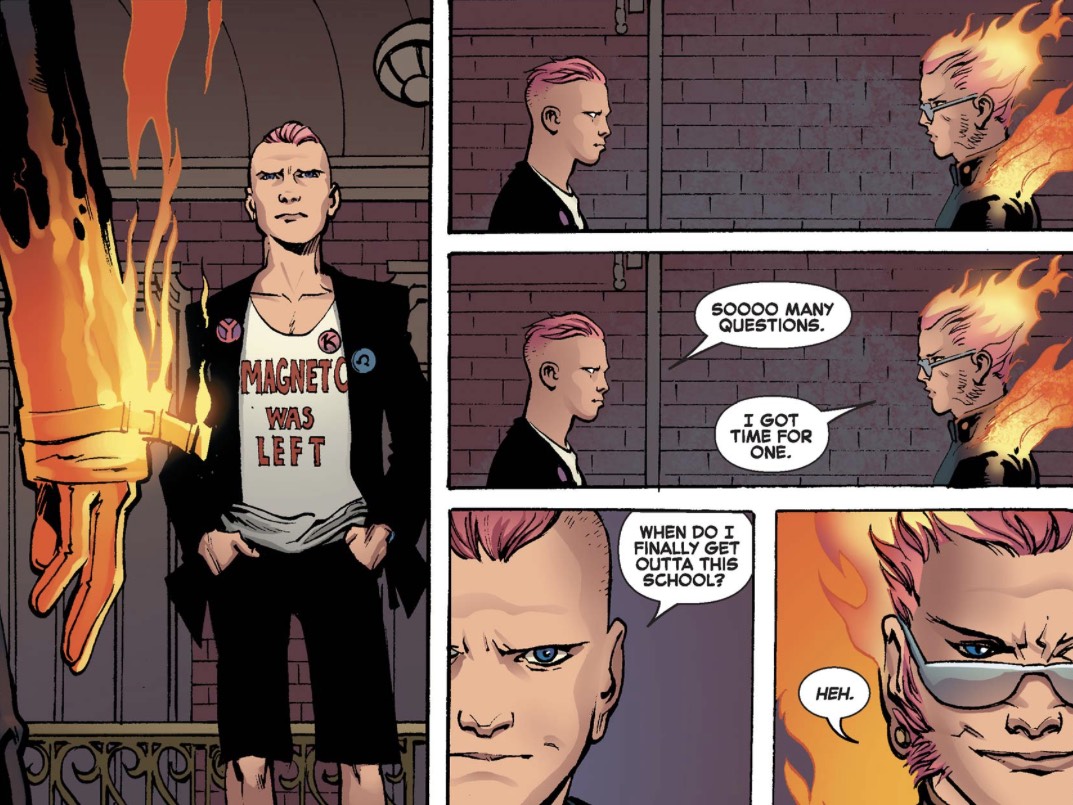 Quentin also began to take part in the wider superhero universe. When Thanos invaded Earth, Quentin banded together with various other superhero schools such as the Avengers Academy to defend Atlantis and Wakanda and later assisted in the cleanup of New York City after Black Bolt activated the Terrigen Bomb. [Infinity: The Hunt #1-4, Inhumanity: The Awakening #1-2] Despite all this, Quentin was still caught off guard when a team of X-Men arrived from the future and he saw his future self among their ranks. Face to face with a future version of himself that was not only a full fledged member of the X-Men but also a powerful Phoenix Host, Quentin was filled with questions. The future Quentin showed him a glimpse of what awaited him, including Quentin’s defeat of Genesis who, as Quentin predicted, succumbed to his nature in the future and turned against the X-Men. [Battle of the Atom crossover, Wolverine and the X-Men (2nd series) #2]

Quentin eventually graduated from the Jean Grey School with a pat on the back from Captain America himself. While Idie and the X-Men were proud to see Quentin’s personal growth, Kid Omega wasn’t sure he liked the future that he was beginning to see for himself… [Wolverine and the X-Men (1st series) #42] The X-Men had enough faith in Quentin to allow him to teach classes but, when the class erupted into chaos, Storm blamed Quentin’s irresponsible behavior. Quentin 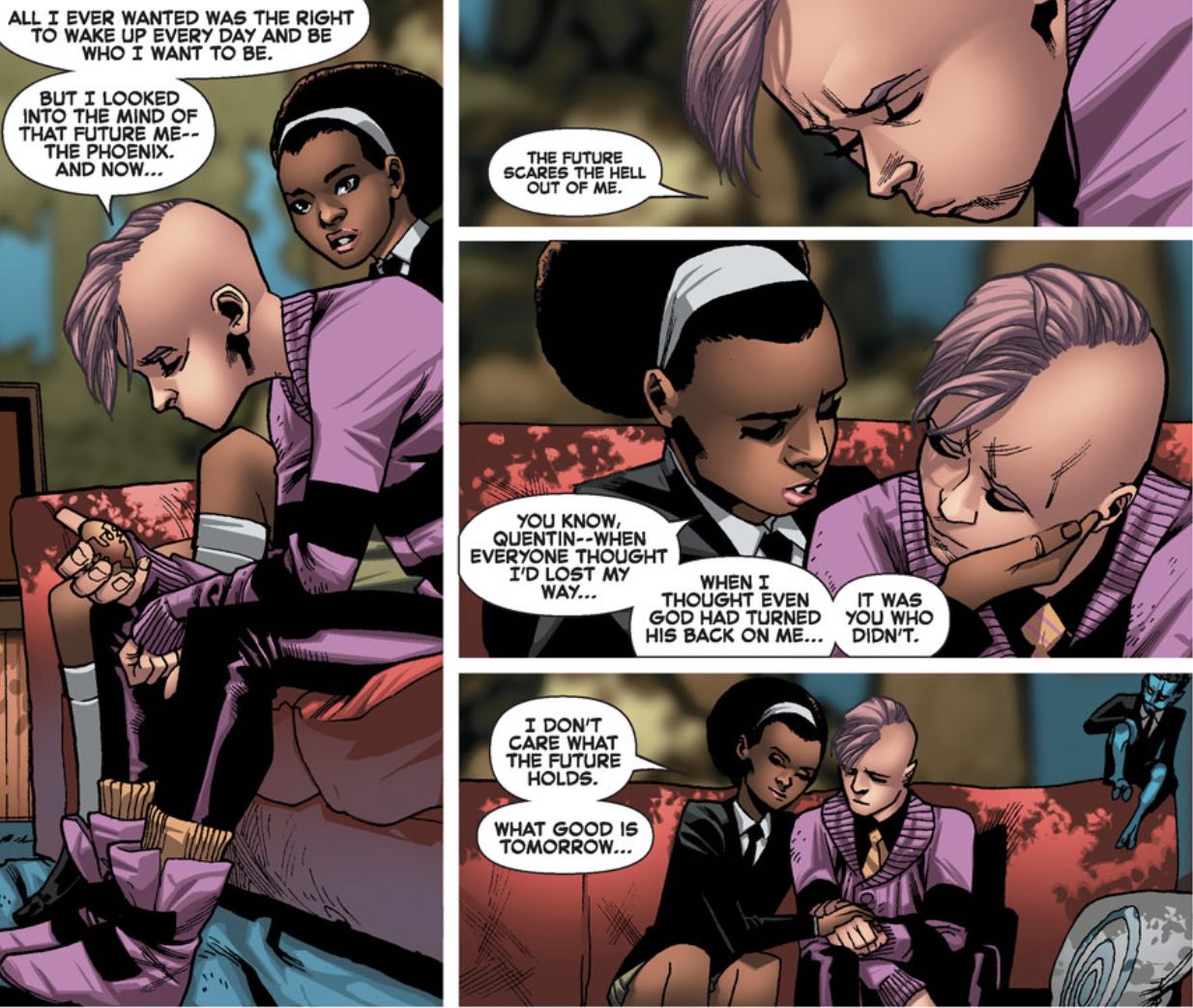 argued with her and accused the X-Men of only taking interest in him because they knew he was destined to become the Phoenix.

Quentin’s identity crisis was at its peak when a cultish organization known as the Phoenix Corporation sprang up, seemingly overnight. Recognizing the group from the glimpse of the future he was shown when he met his future self, Quentin left to investigate. After meeting the group’s CEO, Edan Younge, he realized that this time-displaced corporation had two goals: to kill Genesis and to recruit Quentin. Sick of other people trying to take control of his destiny, Quentin left and sought advice from someone who had dealt with both Apocalypse and the Phoenix Force: Scott Summers. He later returned to the corporation with Cyclops and, wanting answers, forced Edan to take him to the future. Idie, concerned about Quentin, followed and the three of them arrived at the future Jean Grey School just in time to witness Quentin’s future self going full-on Dark Phoenix and brutally attacking Wolverine.

It turned out that Quentin wasn’t the only one shook up after their meeting – his future self had sent the Phoenix Corporation back in time to lure his younger self away from the X-Men or kill Genesis themselves so that Quentin would never have to. His battle with Genesis had cost him Idie and, blaming the X-Men for using him to do their dirty work, Quentin’s future self was taking his revenge 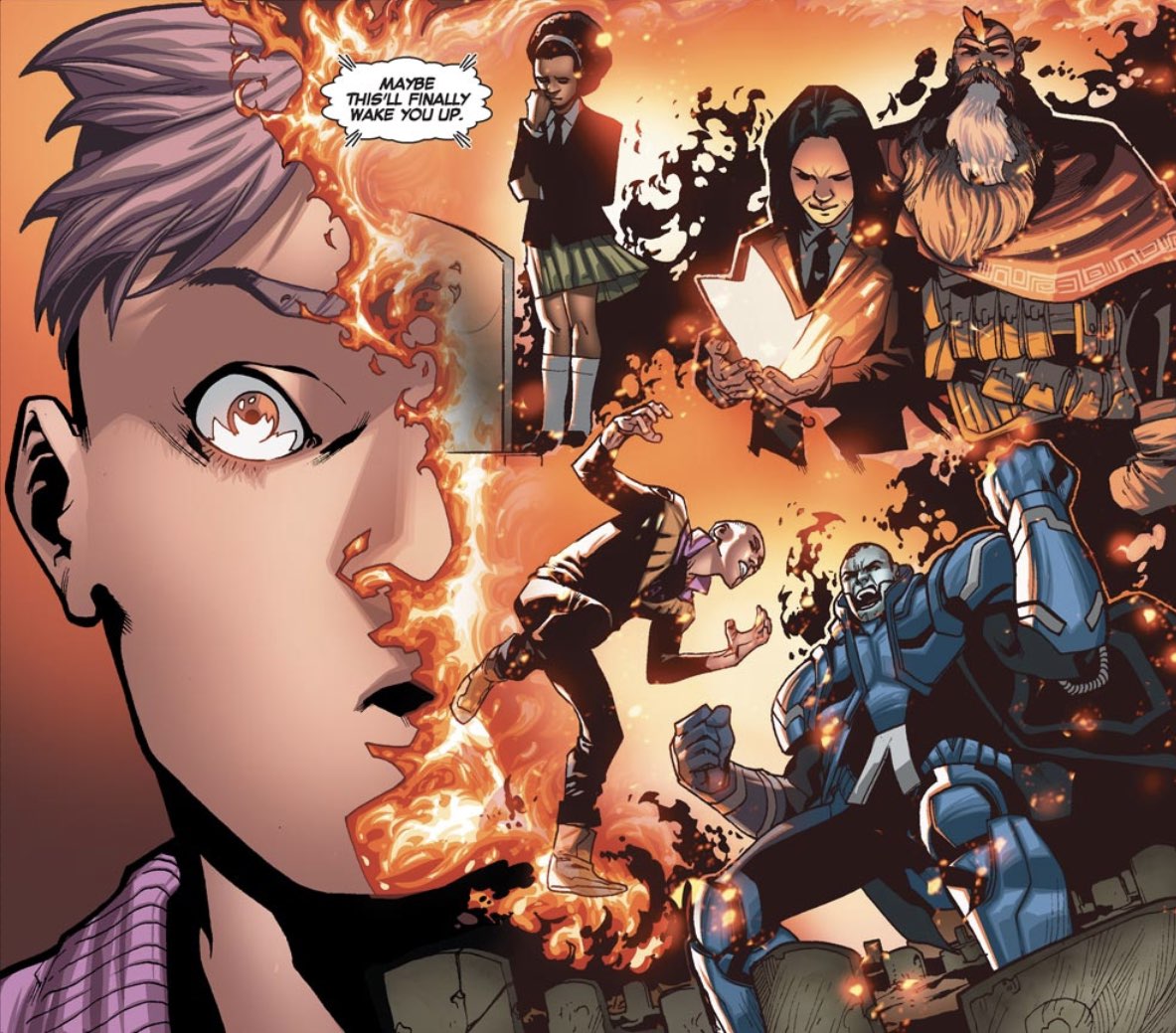 against Wolverine. Alongside Logan’s future self, Quentin and Idie ultimately put Quentin’s future self down before they returned to the present.

Ironically, it was future Quentin’s machinations that drove a wedge in Quentin and Idie’s blooming romance, as she was not only angry with Quentin for keeping secrets but had now witnessed the potential he had for evil. Feeling more lost than ever and seeing firsthand what his future with the X-Men looked like, Quentin left the school to take charge of the Phoenix Corporation, the control of which he had just inherited. [Wolverine and the X-Men (2nd series) #1-6]

Now wealthy and in charge of a shady corporation, Quentin was the perfect fit for the Hellfire Club and was invited to become the club’s new White King. On his 17th birthday, Quentin threw himself a party at the club’s NYC branch and attendees were required to dress in X-Men cosplay. Wolverine, having recently lost his healing factor and fearing his mortality, snuck in for a last-last-ditch effort to bring Quentin back to the Jean Grey School. Although he was kind enough to cease the Hellfire Club’s attack on Wolverine, Quentin wasn’t interested in Wolverine’s latest attempt to analyze him. 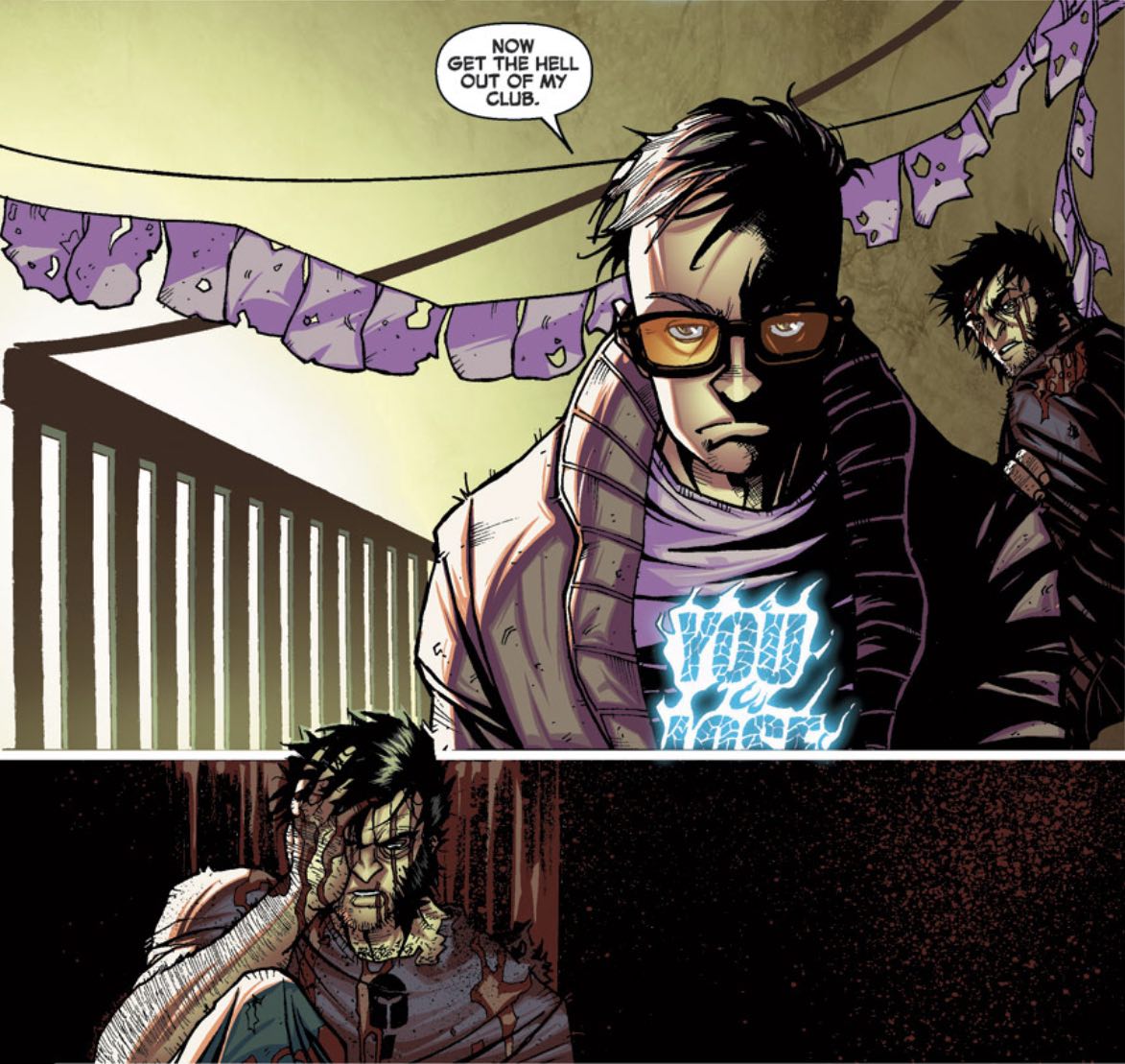 Sick of the X-Men constantly trying to label him as a hero or villain, he showed Wolverine the future he had visited and kicked his former headmaster out of his new domain. [Wolverine and the X-Men (2nd series) #9]

Wolverine’s intuition turned out to be correct and the loss of his healing factor eventually led to his death. Melita Garner, journalist and ex-lover of Wolverine, set out to write Logan’s life story and in the process interviewed various X-Men, superheroes and Jean Grey School Students. When approached by Melita, Quentin pretended to be apathetic toward’s Wolverine’s passing. He coldly dismissed her while slandering Wolverine’s legacy and blaming him for bringing danger to the Jean Grey School. However, Quentin did mourn his former headmaster privately and even built a small memorial for Wolverine in the Savage Land. [Wolverine and the X-Men (2nd series) #11]

When Red Skull set out to eliminate the “mutant menace,” he built mutant concentration camps in Genosha and began collecting those whom he considered to be prime mutant threats. Quentin Quire was among them and was captured by Red Skull’s S-Men. He was eventually freed when the Avengers and X-Men arrived on Genosha. In the ensuing battle, Quentin used his telepathy to protect the various heroes against the psychic powers Red Skull had at his disposal due to having acquired the brain of the late Professor Xavier. In an attempt to bring Professor Xavier’s mind to the surface, the 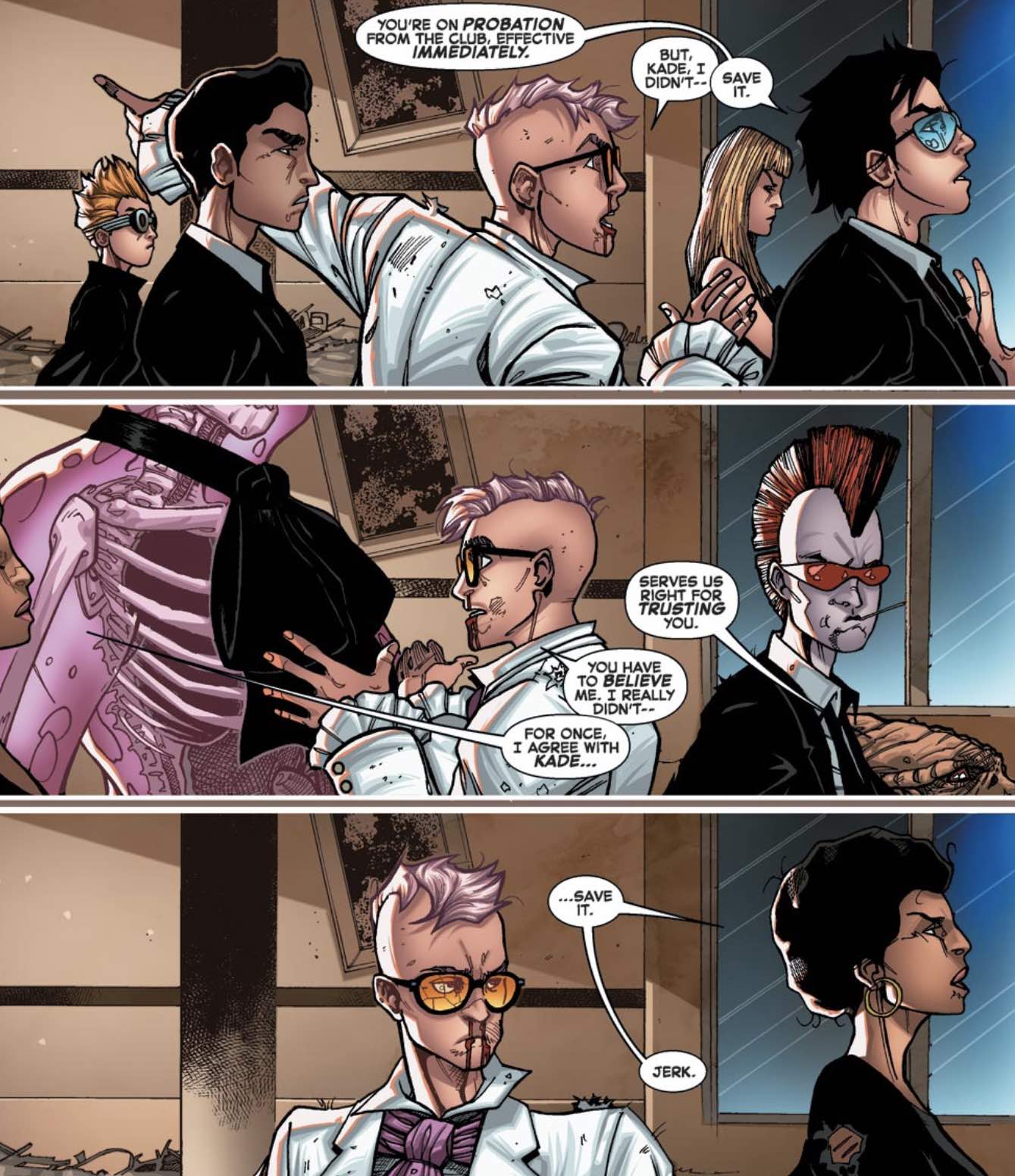 Scarlet Witch and Doctor Strange joined forces and casted an inversion spell. Unbeknownst to anyone at the time, the spell had the unintended consequence of inverting the personalities of all who were present.

Quentin returned to the Hellfire Club and immediately noticed the abrupt shift in his personality. Questioning his allegiance to the Hellfire Club and missing his friends at the Jean Grey School, Quentin invited Idie, Brook, Kid Gladiator and Glob to the club’s exclusive Black Party. Upon their arrival, Quentin tried to make amends for his past actions but, before he could convince them of his newfound change of heart, Storm arrived. Also inverted, Storm caused absolute mayhem, attacking the partygoers and destroying the venue. She then made it seem that Quentin had mind controlled her into crashing the party, which simultaneously threatened his standing with the Hellfire Club and ruined any chance he had of reconciling with his friends. [Avengers & X-Men: AXIS, Wolverine and the X-Men (2nd series) #12]