• Manipulate the manner in
which she perceives the
passage of time, allowing
her to slip in-between the
fabric of reality and move
about freely within a
nano-second time period
while everything else remains
frozen

While children suffering from neglect and constant discouragement by their parents is an unpleasant fact, hardly anyone is aware that the extreme opposite  behavior can cause a child just 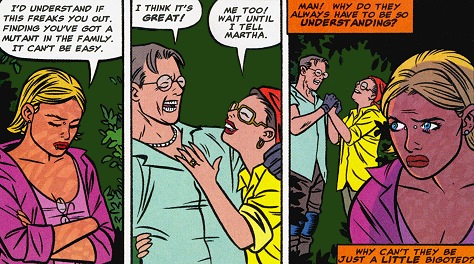 as much trouble and self-esteem issues. Being born to a couple of former hippies who had kept their liberal ideals and rebellious attitude towards the capitalist system despite ending up quite wealthy, one young woman named Woodstock found herself facing that problem. No matter what Woodstock did or said to get a reaction out of her parents, they would show their immediate acceptance and endless support of her. Not even the revelation that she was a mutant caused them to do anything else but cheer and applaud.

Living in Los Angeles, Woodstock followed the adventures of the latest incarnation of X-Force, a group of young mutants exploiting their status as celebrities for personal gain.  Woodstock, 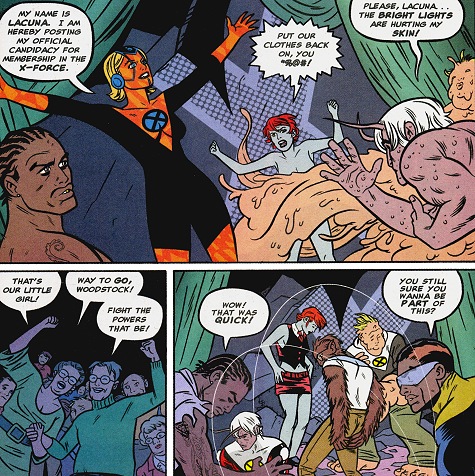 however, believed that they were constantly misportrayed by the press and assumed that they were idealistic fighters for the mutant cause. Determined to prove her use to the team and join them under the name Lacuna, she used her power to shift between the moments in time to enter the X-Force compound and pull some harmless pranks. Sometimes she would misplace items or write her name on the walls. At first, the team turned her down, but when she publicly humiliated them by stealing everyone’s clothes while they appeared live on TV, they gave in and offered her a spot.

However, by then it was Lacuna who declined to join as she had gotten a far better offer. The producers were so impressed by her performance that Woodstock was asked to host her own talk show, “Lacuna and the Stars.” The deciding factor was that, by becoming part of the system, represented by the media, Woodstock had found her parents’ weak spot and told her entire audience how much she enjoyed being a disappointment to them. [X-Force (1st series) #121-122]

For her show, Lacuna used her abilities to slip into celebrities’ houses and expose whatever embarrassing secrets she would learn there. However, she also maintained some relationship with X-Statix, as the group renamed themselves shortly thereafter, sometimes making public appearances with them or having the individual members as guests on her show. [The Brotherhood #9] This connection soon earned her the nickname “the Eighth X-Static,” as usually the roster would be filled with seven regular members.

Lacuna took things too far when she publicly unmasked the team’s latest addition, the Mysterious Fan-Boy, revealing him to be their former enemy, Arnie Lunt. Arnie was a psychically instable, quite powerful reality shaper, who had killed dozens of people on a whim. X-Statix had only let him join to keep an eye on him, as they couldn’t defeat him. X-Statix’s leader, the Orphan, knew that

Lunt was suffering from a fatal heart condition and had hoped to slowly wear him down. His true identity revealed, it was only a matter of time before Arnie would snap again, so he needed to be taken down immediately. While X-Statix kept the Fan-Boy busy with a faked mission, Lacuna injected a lethal injection into his already strained heart. Afterwards, though, she felt guilty about participating in murder. [X-Statix #5]

Woodstock kept reporting about X-Statix when the Orphan was undergoing a personal crisis of faith as well as when Henrietta Hunter, European princess turned pop singer,  came back from the 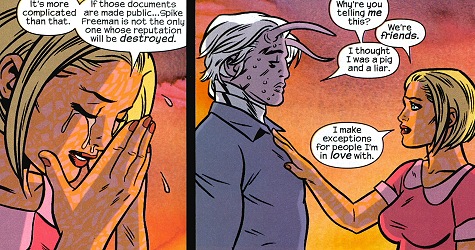 dead and joined the team as well. [X-Statix #6-7, 13, 15] Around the same time, she got hold of documents that linked team benefactor Spike Freeman to Saddam Hussein. Before she would use the information in her talk show, though, Lacuna met with the Orphan to discuss the delicate subject. Apparently, the documents also proved the Orphan’s deceased girl-friend of having been in on the deal too. When the Orphan asked why she told him all that, Lacuna revealed that she had been harboring romantic feelings for him.

Unsure how he or the rest of X-Statix would react, she had left the documents with her lawyer. Obviously that was the smart thing to do, for as soon as he learned of Lacuna’s plan to expose 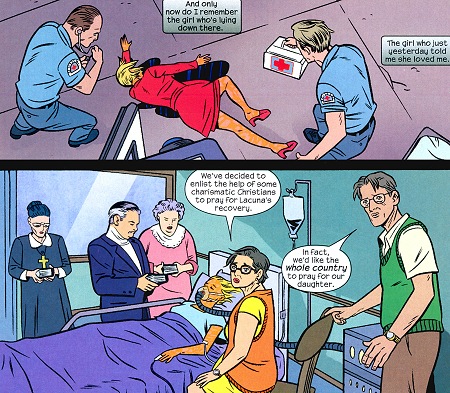 him, Spike Freeman hired a hitman to assassinate her. Unable to warn her in time, the Orphan witnessed Woodstock  being shot in front of the TV studio. [X-Statix #16]

Gravely injured but not dead, Lacuna was taken to a hospital. Her parents seized the chance to be with their daughter again, even at the cost of having to become part of the system too, as they let themselves be filmed at their daughter’s bedside praying for her recovery with some “charismatic Christians.” [X-Statix #17] They even went as far as faking Woodstock’s miracle healing – live on a TV special. Obviously, Lacuna must have woken up some time before and used the opportunity to increase her show’s ratings. [X-Statix #19]

It is unknown whether Woodstock’s show “Lacuna and the Stars” still airs, but it’s rather unlikely. A short while after she made her come-back, X-Statix were killed during their final mission, robbing Lacuna of her most reoccurring guest stars. On top of that, the general population’s attitude towards mutants took a turn for the worse after M-Day, when 90-95% of Earth’s mutants were de-powered by a deranged Scarlet Witch. It’s not even known whether Lacuna was one of the few mutants to keep their abilities or not.