Impose increased mass on people or objects
in his vicinity, causing them to experience
crushing amounts of weight

BIOGRAPHY
Harry Leland was a brilliant lawyer and a prominent member of the New York chapter of the Hellfire Club. Although little is known about his early life, he must have either come from a prominent family or had an exceptional amount of self-made wealth and influence, as the exclusive Hellfire Club did not accept members lacking both of those things.

In addition to being a mutant with the power to exponentially increase the mass of objects in his vicinity, Harry Leland was also a hulking brute who could beat men to death with bare fists. Occasionally reckless in the use of his powers, he would sometimes use his mutant abilities to commit violent murders instead of practicing discretion. 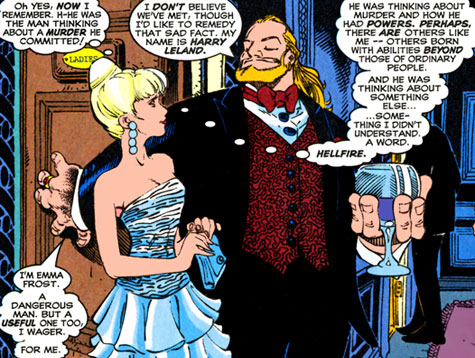 This recklessness once caught the attention of detectives of the NYPD, who put him under surveillance. [Generation X #minus 1]

Harry was also a regular attendee of the Hellfire Club’s extravagant parties. It was at one of these parties that he first met the young telepathic mutant Emma Frost, although the circumstances of their first meeting led to Harry having his memory of the evening completely erased. [Generation X #minus 1]

Leland would meet Emma Frost again years later, when she also became a member of the Hellfire Club. Both Frost and Leland became allied with their ambitious fellow club member Sebastian Shaw, who valued Leland for his loyalty. [X-Men: Hellfire Club #4] Unfortunately, Harry’s loyalty, brilliant mind and mutant powers did not come with an equally exceptional amount of courage. Leland was a coward, and this personal failing would later come to haunt him.

While Shaw maneuvered his way to the top of the Hellfire Club’s elite Council of the Chosen, the Council’s then-ruler, the anti-mutant fanatic Ned Buckman, was working on a plan to purge the world of mutants — including those lurking within his fancy club. Although Shaw ignored the signs of Ned’s treachery, they became impossible to deny during a New Year’s Eve party one year when Buckman double-crossed his supposed allies. Leland and Emma Frost were tasked with looking after the unconscious Colonel Michael Rossi, whose aircraft was downed by the Sentinels. Mere moments after the telepathic Frost relayed to Shaw the information she had plucked from Rossi’s mind regarding Buckman, Steven Lang and Project: Widewake, she and Leland were attacked by the Sentinels Buckman sent after them.

Leland cowered during the Sentinel attack and was grateful when Shaw and his fiancé Lourdes Chantal arrived by way of teleportation. Happy to let Shaw attack the Sentinels on his behalf, Harry hung back and watched Shaw go to work. However, Shaw soon found himself overwhelmed and, when Lourdes moved in to rescue him, she fell victim to the deadly weapons of the Sentinels. At that point, the guilt-stricken Leland rose to act and made quick work of the attacking machine, nearly giving himself a heart attack due to overexertion in the process. However, he was too late to save Lourdes.

Despite Leland’s failure to act, he stayed in Shaw’s good graces. After Shaw assassinated Buckman and his Council of the Chosen and rose to the position of Black King, he made Leland the new Black Bishop. [Classic X-Men #7]

Perhaps overconfident in their newfound power, this rookie Council — now referring to themselves as both the Inner Circle and the Lords Cardinal — got more than they bargained for when they crossed the mutant X-Men. They intended to capture these noteworthy mutants, isolate the X-genes in their bodies and sell them on the marketplace for an enormous profit. Emma Frost and agents of the Inner Circle ambushed the X-Men when they were away from the X-Mansion trying to recruit some new mutants, and though they managed to capture some of them during this encounter, they couldn’t contain them for long. [X-Men (1st series) #129-131]

This act of aggression put the Hellfire Club on the X-Men’s radar — but when the X-Men retaliated, the Inner Circle was ready for them. One evening, during a Hellfire Club party, Cyclops, Phoenix, Storm and Colossus infiltrated as guests while Wolverine and Nightcrawler attempted to sneak in through the sewers. Leland and his associate Donald Pierce intercepted the X-Men in the sewers and quickly dispatched them. Leland took care of Wolverine by increasing his mass to a point where the adamantium-laced mutant broke through the floor and plummeted into the turbulent sewers below. Assuming he drowned, Leland reported his victory to Shaw.

Wolverine survived, however, and returned with a vengeance. With the rest of the X-Men in the Hellfire Club’s grip, 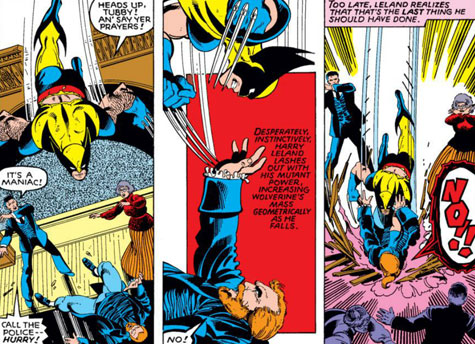 Wolverine cut his way through their guards and ambushed the Lords Cardinal just as the X-Men were breaking free. Cyclops knocked Leland off the balcony and to the floor below, at which point Wolverine dive-bombed him — with his claws extended. Instinctively, Leland reacted to the approaching mutant by using his mass-increasing powers on him — much to his immediate regret. Wolverine, with his claws fully extended, collided with Leland with the force of a cannonball, inflicting him with life-threatening injuries. [X-Men (1st series) #132-135]

After Harry recovered from his wounds, the Inner Circle struck back at the X-Men, this time by ambushing them at their school with Sentinels. They swiftly took the X-Men captive, and Leland gloated over their triumph in front of their prisoners, taking special pleasure in humiliating Wolverine. Sure enough, though, the X-Men managed to break free and defeat the Inner Circle in the ensuing battle. Shaw sustained some heavy injuries during this fight, after which the Hellfire Club admitted defeat and declared a truce until Shaw recovered. They vowed not to attack the X-Men anymore. [Uncanny X-Men (1st series) #151-152]

Surprisingly, the X-Men and the Hellfire Club actually sustained their truce for quite some time, with both sides seeing no reason to tussle with the other. This all changed, however, when one of the X-Men’s newer recruits, Rachel Summers, 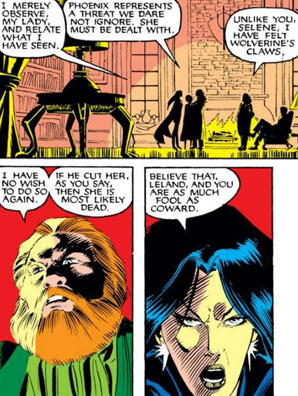 went rogue and attempted to assassinate all of the Lords Cardinal, beginning with the monstrous Selene. After Wolverine stopped her and saved Selene’s life, Selene called a meeting with the rest of the Lords Cardinal and demanded they punish Rachel for her transgression. Although Harry was reluctant to cross the X-Men again out of fear feeling Wolverine’s claws, Selene goaded him and Shaw into taking action, to which they eventually acquiesced. The Inner Circle geared up for battle and tracked Rachel to Central Park, where they encountered the X-Men. Leland proved to be a strategic asset in the ensuing battle, using his powers to remove both Colossus and Rogue — the X-Men’s two heaviest hitters — from the fight. Unfortunately, just as the Inner Circle was embracing victory, an interloper arrived: Nimrod, an advanced sentinel from the future programmed to terminate all mutants. [Uncanny X-Men (1st series) #208]

Although all of the gathered mutants were frightened by the appearance of the Sentinel from the future, none were as terrified as Leland, who wished at that moment he possessed Shaw’s courage. Shaw’s courage didn’t do him any good, however, when Nimrod knocked him into orbit. Declaring a momentary truce with the X-Men, Leland began taking orders from Storm. As per her instructions, he used his powers to bind the unstoppable Nimrod to the ground — at great strain to his own body. Still, he kept at it. He strained himself so hard, however, that he had a heart attack and collapsed,

but still retained his grip on the Sentinel. As he lay dying, Storm asked one last favor of him: bring Shaw down to Earth to obliterate the constrained Nimrod. Leland complied, using the last of the life that remained in him to increase his friend’s mass and bring him back to Earth with the force of a meteor. The last thing Leland witnessed in the mortal plane was his indestructible friend and role model smashing into Nimrod and destroying him. With that, the light faded from Leland’s eyes. Although he lived his life as a coward, Harry Leland died a hero. Or, in the words of Wolverine, “fat man had his faults — but he made his exit with style.”  [Uncanny X-Men (1st series) #209]

ALTERNATE VERSIONS
In the mutant-dominated House of M universe, Harry Leland was the commissioner of the NYPD. He oversaw John Proudstar and his “Brotherhood” strike force’s disastrous purge of Sapien Town, which ultimately backfired when TV reporters broadcast the civil rights abuses mutants were inflicting on the minority human population. 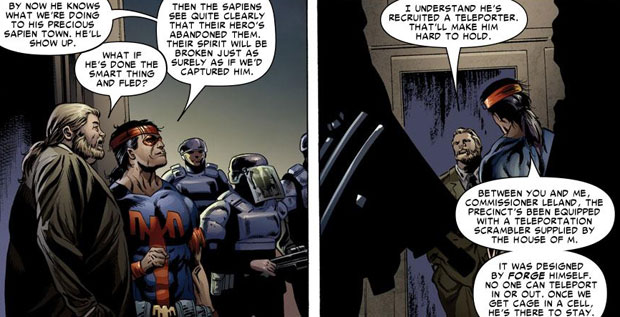