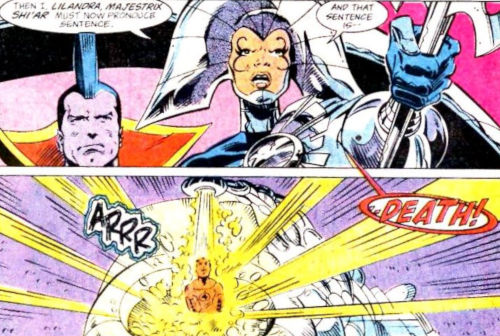 In the universe depicted in What If? (2nd series) #15 Lilandra proceeded with executing Reed Richards as punishment for saving Galactus, rather than spare his life. This had dire consequences for Lilandra and the Shi’ar, when the remaining Fantastic Four accidently destroyed Chandilar using a Skrull saucer equipped with Annihilus’ cosmic control rod. 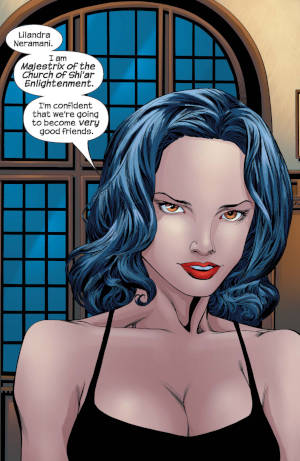 In the Ultimate Universe, Lilandra Neramani was a human woman and leader of the Shi’ar Church of Enlightenment. The church believed the Phoenix would save mankind and were opposed to the Hellfire Club, who saw the creature as a destroyer and a weapon. When she learned Jean Grey was the host of the primordial force, she approached Professor Xavier and arranged to run tests on the girl. Unfortunately, these tests temporarily drove Jean mad, and she nearly killed Lilandra, before Xavier saved her. She later started dating Xavier until his apparent death. 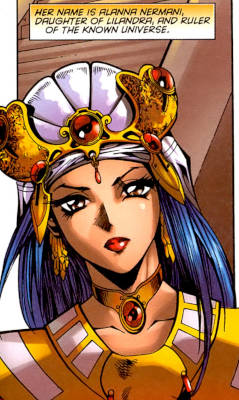 The Neramani tendency for familicide was inherited by Lilandra and Charles Xavier’s daughter Alanna Neramani. When Lilandra lost her throne in a Shi’ar Civil war, she sought aid from Charles and the heroes of Earth to reclaim it. Alanna, who learned tactics from her aunt Deathbird’s journal, seized this opportunity. She brought a fleet of Shi’ar ships to Earth and annihilated the Xavier Institute, killing her parents and many of Earth’s heroes. With little opposition left, Alanna seized control of the Earth, though she was later overthrown by a small band of rebels. 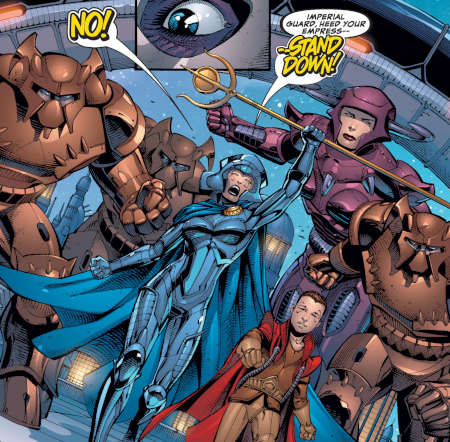 In one future, depicting The End of the X-Men, Lilandra bore a son to Charles Xavier, though she never told him. Later, Cassandra Nova influenced the Shi’ar, orchestrating the destruction of the X-Men. When Charles and the X-Men responded Nova, brutally murdered Lilandra before his eyes and took possession of their son, Xavi. Xavi himself was later killed during Nova’s battle against her foes. 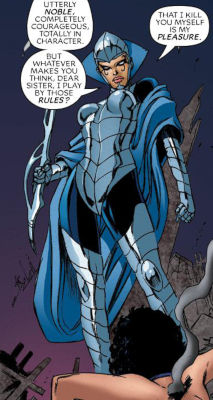 A much more evil version of Lilandra was seen in New Exiles #14-17. This Lilandra relentlessly hunted her older sister, Cal’Syee Neramani, across the universe to secure her throne. When her sister was found on Earth, she personally visited the planet with the Death Commandoes to kill her. She faced opposition from the reality hopping Exiles and the local Sons and Daughters of the Dragon, faring well in open combat. Ultimately, however, she was defeated and incarcerated on Earth, while Cal’Syee took the throne.