Lilandra Neramani is an extraterrestrial, born of the the Shi’ar, avian-like humanoids which have become the dominant species in their native galaxy. Lilandra was the youngest daughter of the Neramani family, the ruling dynasty of the Shi’ar Empire. With an older brother and two older sisters, she was unlikely to ever take the throne.

As a teenager, she was sent to the Chandilar Academy to learn the art of combat. Lilandra, however, felt it was because she was an embarrassment to the family for her peaceful nature. 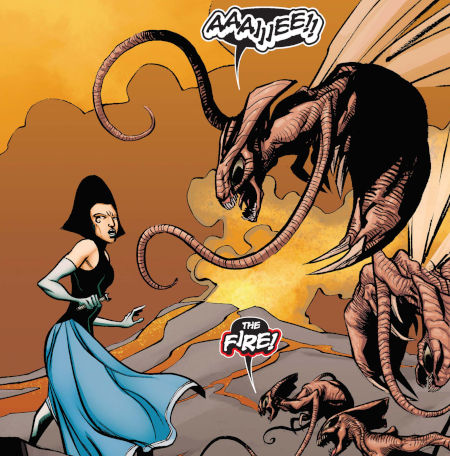 While extremely intelligent and quick to learn, her instructors felt she lacked the cunning and killer instinct in combat. Things changed, however, when the academy came under attack from the Brood. While her instructors and peers fell to the aliens, she used her knowledge to trap the Brood within the holographic simulation of a volcano, using their fear of fire against them. This only reinforced her belief that if a person had to fight they needed to fight smart. [War of Kings: Warriors #2]

At some point during the following years, Lilandra’s eldest sister Cal’syee, a genetic throwback, murdered her parents and other sister in a fit of rage. After she was exiled for her crimes, D’Ken became emperor, and he appointed Lilandra as grand admiral of the Shi’ar fleet.  Unlike her family, Lilandra hated political intrigue and the buying and selling of loyalties that came with it.  She much preferred the company of aliens, and gladly tool the role of admiral to explore the cosmos.

Unfortunately, her brother grew increasingly obsessed with amassing power and when, he revealed his desire to seize the potentially universe-ending power of the M’Kraan Crystal for himself, Lilandra opposed him. The M’Kraan Crystal was sacred to Shi’ar society and, as a nexus of realities, held vast power within. D’Ken quickly had his sister arrested for treason but, when word spread about this amongst Lilandra’s supporters, the empire broke out into civil war.

Held captive upon an Imperial Dreadnought, Lilandra was taunted by her brother via hologram, and offered one last chance to pledge her support, which she refused.  Lilandra’s fortunes seemed lost until forces loyal to her attacked the ship, allowing her to escape. During her flight, however, she was suddenly subjected to a wave of psychic energy. Unbeknownst to her, untold light years away, the X-Men’s Charles Xavier had unleashed a massive psychic attack on the Z’Nox, driving them away from Earth. The attack had the unexpected side effect of briefly merging Lilandra and Xavier’s minds and the pair felt their way through the confusion for a time, while 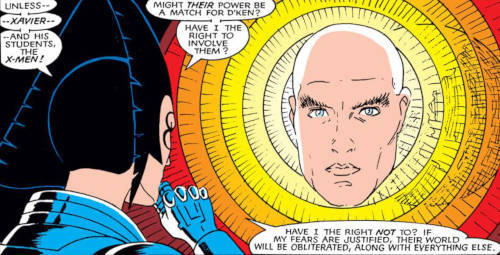 Lilandra’s and D’Ken’s forces destroyed each other. Once the merging subsided and she learned her fleet had been destroyed, Lilandra stole a small ship and headed towards Earth, hoping to recruit Xavier and his X-Men for her cause. [X-Men (1st series) #107, Classic X-Men #14]

While the merging of her mind with Xavier created a powerful bond between the pair, it was also so strong that D’Ken’s psychic spies were able to detect it and prepare for her arrival on Earth. Eric the Red, D’Ken’s agent on Earth, orchestrated several attacks on the X-Men, in an attempt to intercept Lilandra. When she finally reached Earth, Lilandra had only the briefest of meetings with Charles Xavier before she was quickly captured by Eric the Red. Lilandra’s captor created a portal through which he dragged Lilandra across the galaxy to her brother’s feet. [X-Men (1st series) #105] 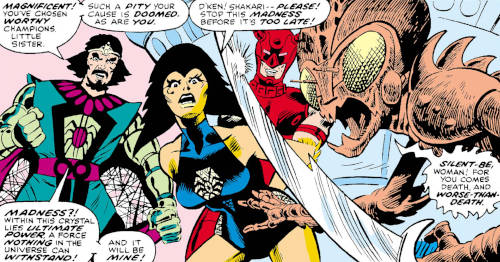 Lilandra found herself on the planet of the M’Kraan Crystal, where D’Ken intended to harness the Crystal’s vast energies during a once in a million year celestial alignment. D’Ken intended to sacrifice his sister to his pet demonic executioner, the Soul Drinker. Fortunately, she was saved in the nick of time thanks to the timely intervention of the X-Men and their new allies, the Starjammers. [X-Men (1st series) #107]

Through the combined efforts of the X-Men and the Starjammers, D’Ken’s plan was interrupted before he could harness the crystal’s power. D’Ken was thrown into the crystal by Raza of the Starjammers and was rendered permanently catatonic by it.  As the X-Men returned to Earth through Erik the Red’s portal, Lilandra followed, much to Xavier’s surprise. With D’Ken catatonic and no next of kin, Lilandra was now the empress of the Shi’ar by birthright. However, due to leading a rebellion against the empire, she was technically branded as a traitor and, while that legal issue was sorted, she resolved to spend time on Earth with her new love Xavier. [X-Men (1st series) #108]

Because of their connection, Lilandra and Charles found themselves instantly in love. Together they travelled to southern Greece for some quality time together. While she found Earth primitive compared to her home, spending time with Charles made it worth it. Their relationship soon faced its first test when Xavier believed most of his X-Men to be dead after a battle with Magneto. Lilandra comforted him in his time of need. [X-Men (1st series) #113-114]

With his X-Men seemingly dead, Xavier became despondent. Lilandra reached out and

encouraged him to come with her to Chandilar as her consort. Since he had little to keep him on Earth, he agreed and the pair departed Earth soon after. [X-Men (1st series) #117-118]

With all legal barriers to assuming the throne finally overcome, Lilandra was welcomed back to Chandilar by the cheering masses and she was crowned in a coronation ceremony. While she longed for the simple days on Earth, where it had been just she and Charles, she accepted her new crown and the responsibilities that came with it. [X-Men (1st series) #122]

Soon after taking the throne, Lilandra faced her first challenge in the form of a coup, led by her late father’s closest friend, Ka’Ardum. As grand admiral of the Shi’ar fleet and beloved by the people, Ka’Ardum almost won the throne, but ultimately failed. Given that he was like an uncle to her, Lilandra chose banishment, rather than to execute him. [Uncanny X-Men (1st series) #484]

As Majestrix, her role kept her extremely busy, leaving her little time to spend with her consort. Charles would often offer his aid, only to be politely rebuffed by Lilandra, as there was little he could do. He also became frustrated that most of Lilandra’s colleagues considered him a backwater moron. As such, when he researched the Phoenix and decided to return to Earth to support its current host Jean, Lilandra was supportive. [X-Men (1st series) #125]

Lilandra was reunited with Charles soon after, though the reunion was less than ideal. Despite Xavier’s attentions, the power of the Phoenix slipped away from Jean Grey’s control, transforming her into the Dark Phoenix.  After Jean consumed the Shi’ar world D’Bari, killing all of its

inhabitants, Lilandra recognized the threat the Phoenix faced to the universe and as Shi’ar Majestrix resolved that Jean had to die. Not wasting any time, she amassed her forces and kidnapped the X-Men. Though her former allies questioned how they could do this to her friends, Lilandra remained resolute in her duty to protect her empire.

Before they could execute Jean, however, Charles challenged the Shi’ar to Arin’nn Haelar, a dual of honor, for Jean’s life. Secretly, Lilandra was proud of her beloved for learning so much about Shi’ar culture. However, pride turned to sorrow, as it broke her heart to see Charles in pain as each of his X-Men fell in combat. Worse, she was unable to comfort him, either during the battle or in the end when Jean sacrificed her life. Nevertheless, Lilandra attended her funeral, providing her parents with a holoempathetic matrix that would always provide them with an image of their daughter and the essence of her personality. [X-Men (1st series) #135-138]

Weeks later, during a meeting of the Shi’ar Grand Council, Lilandra was kidnapped by mercenaries working for her sister Deathbird and held prisoner upon her ship. Deathbird was angered her sister had claimed the throne over her and had made an alliance with the Brood to help her claim the throne. Lilandra was reunited soon after with Charles when he and his X-Men were also kidnapped by Deathbird and the Brood. Lilandra was remorseful for the suffering she had brought into Charles’ life, though Charles told her he wouldn’t trade it for anything. When she finally came face to face with her sister, Lilandra attacked in a rage, though was easily taken down by Deathbird. 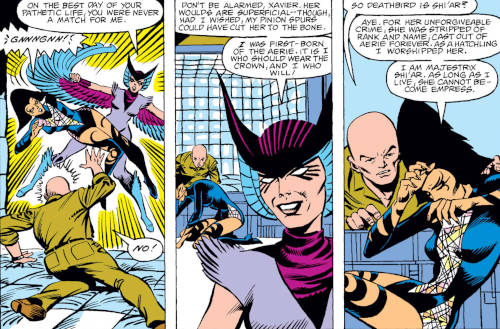 Through the efforts of the X-Men and the Starjammers, Lilandra was freed from the clutches of her sister and the Brood. The group raced back to the Earth, where Deathbird’s mole, Admiral Samedar, planned to destroy the planet. Fortunately, Lilandra managed to direct those forces still loyal to her to cease all hostilities. [Uncanny X-Men (1st series) #154-157]

Their victory seemed short-lived, however. During their encounter with Deathbird and the Brood, Charles fell prey to a mystery ailment and was rendered catatonic. Lilandra stayed by his side and used all the resources she had at her disposal to help him, to no avail. Despite this, Charles suddenly and surprisingly recovered of his own accord, much to Lilandra’s surprise. [Uncanny X-Men (1st series) #161]