Months later, when the Starjammers connected with Xavier’s student Magik, who had accidentally teleported across the universe, it pained Lilandra to see the pair together, as she worried she was going lose Charles to Earth again. Despite her feelings, she aided him in rescuing his students from across time and space. Even when Charles learned of the events taking place back on Earth and resolved to return home, Lilandra did not waiver in helping him. Ultimately, though, Xavier made the choice to stay with the Starjammers, to Lilandra’s relief.

Since joining the Starjammers, Lilandra had been receiving constant barbs from Hepzibah, who despised all Shi’ar for what the empire had done to her people and planet. Finally fed up, she punched out the feline woman, telling her she could hate her for who she was, but she not what she thinks she represents. [New Mutants (1st series) #50-51]

During the Starjammers’ battles against Deathbird’s regime, they became aware of her quest to acquire the power of the legendary Phalkon. The rebels raced to find the Phalkon before the empress, which brought Lilandra face to face with her sister for the first time since losing her throne. Deathbird personally lead the Imperial Guard in an attack on the Starjammer, capturing her sister.

Lilandra fought free of her sister, saved the injured Sikorsky (who had taken a projectile meant for her) and attempted to assassinate Deathbird. Unfortunately, Corsair teleported her away before

she could finished the deed, which angered the woman greatly. However, Corsair reminded her they weren’t there for her vendetta. More tragically, however, during the quest Charles had sustained an injury and slipped into a coma, then later died. The loss of Charles hit Lilandra hard, especially because Corsair insisted on keeping his body in a preservation chamber.

Soon the group tracked Deathbird to Earth, where they learned the Phalkon was in fact the Phoenix Force, which currently resided in Rachel Summers. Lilandra fought her sister once more, this time defeating her, though Deathbird still managed to escape. While their quest was ultimately a failure, the Phoenix energies Deathbird had stolen from Rachel Summers were used to resurrect Charles. This not only returned Charles to life but also bestowed upon him the powers of the Phoenix, albeit for a limited time. With a temporarily Phoenix-empowered Xavier at her side, Lilandra finally had a symbol around with her people could rally. She and the Starjammers began fanning the seeds of rebellion. [X-Men: Spotlight On...Starjammers #1-2]

While leading her rebellion, Lilandra and the Starjammers fell prey to a score of Warskrulls. The scheming aliens replaced Xavier and the Starjammers and used Xavier’s mimicked telepathy to mentally dominate Lilandra. The Warskrulls escalated the rebellion’s progress using Xavier’s stolen abilities and managed to seize control of the empire from Deathbird. Their plot was short-lived, however, thanks to the intervention of the X-Men, and Lilandra was freed from the Warkrull’s control. During the Warskrull’s takeover, they had forced Deathbird to abdicate the throne to her sister and, though it had been against her will, Deathbird had grown bored with her role and allowed Lilandra to keep her throne unchallenged. The victory was bittersweet, however, as Charles decided he was needed back on Earth and the pair said a stoic goodbye to each other. [Uncanny X-Men (1st series) #275-277]

Lilandra’s first challenge as Majestrix came soon after when war broke out between the Shi’ar and the Kree, due to recent expansions by both parties. No stranger to the ways of war, she sent her fleet to secure the strategic warp point near Earth’s sun, and also sent the Imperial Guard to acquire key Kree technology, such as the psych-magnetron and the nega-bands. She was also approached by her sister Deathbird, who offered her aid.

A squad of Avengers soon arrived on Chandilar to ask the Shi’ar to stop using the stargates near Earth's sun, as the disturbances were causing abnormal solar flares that could jeopardize Earth itself. Lilandra, however, was too busy overseeing development of a devastating new weapon, a nega-bomb, to hear the Avenges out. When the nega-bomb was completed, she tasked the Starjammers, rather than her own fleet, with transporting it to Kree space. 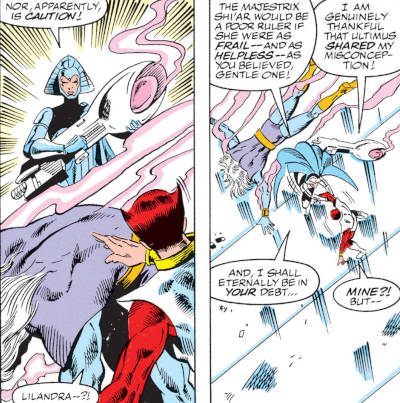 Eventually, the Majestrix met with the Avengers and strongly considered their request. However, before any resolution to Earth’s plight could be reached, she was attacked by the Kree Starforce, a group of superhuman Kree assassins. Not the frail woman they expected, Lilandra took down the powerful Kree Eternal, Ultimus, with a massive energy weapon. Partly due to the Avengers heroic actions in defending her, she realized her mistake in deploying the nega-bomb and recalled it.

Lilandra was resolute that the Kree Starforce were to be executed, despite the Avenger’s pleas to negotiate with them for peace instead. In the ensuing fracas that broke up between the Avengers and the Imperial Guard, Lilandra’s chief advisor, Chancellor Araki, was revealed to be a Skrull in disguise. This new information caused Lilandra to realize these hostilities were likely all at the result of Skrull manipulations, and decided to end the war. 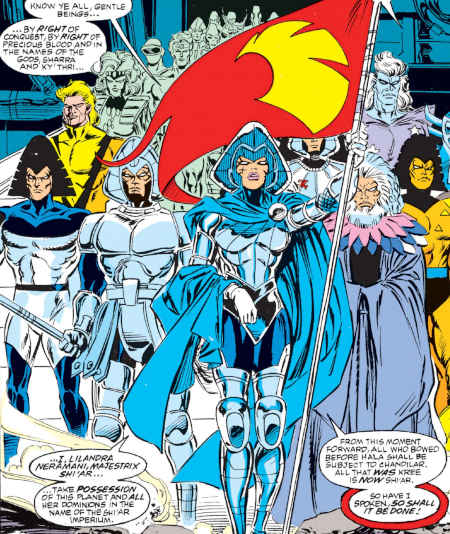 nfortunately for the Majestrix, the nega-bomb she had recalled was stolen by the Skrulls and detonated within the Kree Empire, decimating the population of the whole galaxy. Despite her desire to end the war, Lilandra had instead won it, albeit through the Skrull’s manipulations. She promptly arrived on Hala and claimed the Kree worlds for the Shi’ar. In a surprising move, Lilandra named her sister Deathbird as viceroy of the Kree worlds, claiming she wanted her sister where she could see her, rather than hiding in the shadows. [Operation: Galactic Storm crossover]

Having lost her parents and brother, and with the strained relationship with her sister, Lilandra had little family remaining in her life. So, it struck her hard when her niece Sharra Neramani, Deathcry, succumbed to her animalistic urges and murdered a fellow officer. Disgusted by her niece’s behavior and for bringing the legitimacy of the royal line into question, Lilandra banished her. However, she gave Deathcry the opportunity to redeem herself by sending her on a mission to Earth to help protect the Avengers from Kree assassins. [Chaos War: Dead Avengers #2, Avengers (1st series) #363]

Lilandra’s responsibilities as Majestrix would bring her into conflict with her friends and allies on many occasions. When the notorious Shi’ar criminal Cerise was found amongst the ranks of Earth superteam Excalibur, Lilandra had the Starjammers arrest the woman and take her to prison. Naturally, Excalibur came to rescue their friend, prompting Lilandra to connect with a psychic prisoner to communicate with the team. Through the prisoner, Lilandra was able to learn the truth of Cerise’s crimes: she did in fact destroy her ship and kill her captain and crew but it was to save an innocent world from genocide. Regardless of her intentions, Cerise still committed a serious crime; Lilandra could not pardon her. Showing mercy, the Majestrix allowed her to serve out her sentence at her side, as an advisor. [Excalibur (1st series) #69-70]

X-Men Battle of the Atom #1