With Charles recovering and Deathbird seemingly defeated, Lilandra had to return to her royal duties. Before she departed, though, she organized a farewell dinner for her friends upon her ship, save Charles who was still healing. Their dinner was cut short by the return of Deathbird and the Brood, who abducted Lilandra and the X-Men. When Lilandra next awoke, she was imprisoned on the Brood’s homeworld, unaware that she had been implanted with a Brood embryo. 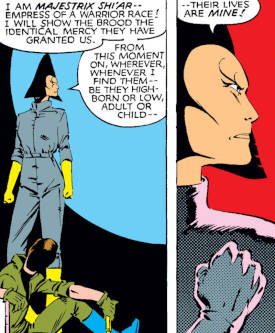 Thanks to the efforts of some of the X-Men, Lilandra was soon freed and played a key role in their escape, piloting the ship. Upon learning about the Brood inside her, she was outraged and disgusted at the violation.  Knowing that there was no cure, Lilandra refused to transform into something she despised. As such, she was more than willing to participate in a suicide mission to kill the Brood Queen and free a trapped Acanti soul from their clutches. Unexpectedly, freeing the Acanti soul had the side effect of purifying their bodies, purging the Brood infection. Despite this, the Brood’s actions made a lifelong enemy of Lilandra that day. [Uncanny X-Men (1st series) #162-166]

The threat of the Brood was not over for Lilandra, however. Whilst in the alien’s clutches, the group had learned that Charles Xavier, who was still on Earth, was also infected with an embryo, and would soon transform him into a Brood Queen. The group raced back to Earth but arrived too late to halt the transformation. Although the metamorphosis was irreversible, thanks to the advanced technology at her disposal Lilandra was able to arrange for a new cloned body to be created for her love, into which Xavier was able to transfer his consciousness.

At this time, Lilandra was approached by Gladiator, Praetor of her Imperial Guard, who confirmed her worst fears. Whilst Lilandra had been occupied with the Brood, Deathbird had seized control of the Shi’ar Empire. 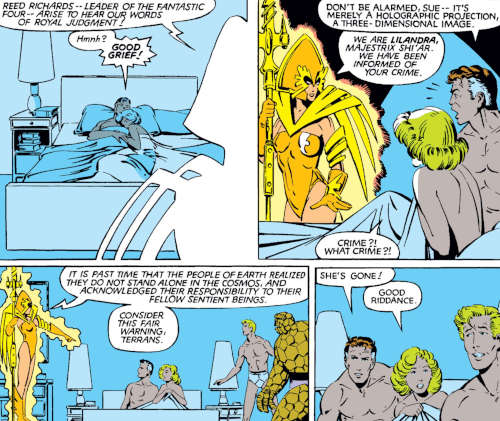 Despite losing her title, Lilandra still felt it her responsibility to admonish Reed Richards, whom she had learned he had saved the life of Galactus, devourer of untold number of Shi’ar worlds. Appearing before the sleeping Richards as a hologram, Lilandra informed him that if one more populated world was devoured by Galactus he would be held accountable and punished under Shi’ar law. [Uncanny X-Men (1st series) #167]

Once more, Lilandra was placed in a position of having to lead a rebellion against another mad sibling, but she was undecided if she could go through all that again. While she deliberated, she opted to spend some more quality time with Charles on Earth, helping him recuperate and taking care of his fledging young team, the New Mutants. Being a warrior of the Shi’ar, Lilandra wasn’t content to sit by idly; she participated in missions sometimes too, helping the X-Men take down an army of rogue sentinels. [New Mutants (1st series) #4, Uncanny X-Men (1st series) #168, X-Men: Gold one-shot]

Despite being ousted as Majestrix, Lilandra still clearly had some sway with the Galactic Council. When Galactus devoured the Skrull homeworld, she was true to her promise and arranged for Reed Richards to be put to trial. Despite objections from the Fantastic Four and the Watcher, she was steadfast that her decision that Richards should be put to death for his actions. She even faced down Galactus himself, until Eternity opened her mind and made her understand the Devourer served an important purpose in the universe. [Fantastic Four (1st series) #261-262] 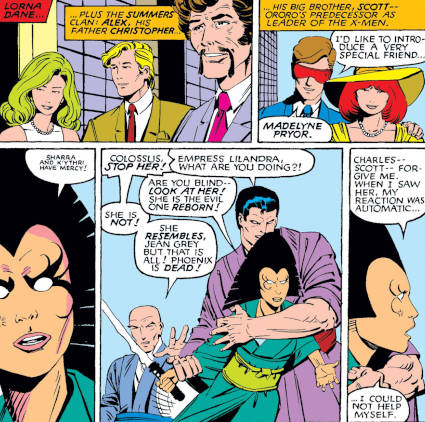 Whist attending Wolverine’s wedding in Japan, Lilandra was stunned to meet Cyclops’ new paramour, Madelyne Pryor. As Madelyne was the spitting image of Jean Grey, Lilandra reacted violently and attempted to attack the woman before being restrained. Realizing her mistake, the former empress was remorseful and apologized for her actions. [Uncanny X-Men (1st series) #173]

Eventually, Lilandra decided she had to return to space and fight for her empire. After saying a painful goodbye to Charles and her friends, she departed with the Starjammers to start her rebellion against her sister’s rule. She maintained regular communication with Charles while she could, until the distance would no long permit it. They would not again speak until they could meet face to face. [Uncanny X-Men (1st series) #177]

After weeks in space, fighting a guerrilla war against her sister, Lilandra suddenly sensed Charles’ death pangs through their psychic connection. His cloned body was failing and his only chance to live was with the medical technology on the Starjammer. Together with Corsair, Lilandra long 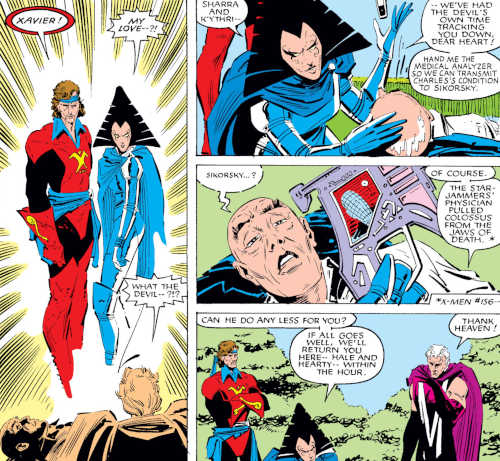 ranged teleported back to Earth to retrieve Xavier, a feat made all the more dangerous as the Starjammer was currently under attack. Although she managed to rescue her love in the nick of time, the ship’s engine were crippled in the attack, meaning they could never return Charles to Earth. While Lilandra was remorseful for having put Charles in this situation, she was still overjoyed to have him by her side once more. [Uncanny X-Men (1st series) #200-201]