The Majestrix reconciled with Xavier soon after, when he contacted her and requested a visit to space. Unfortunately for Lilandra, whilst he looked like Charles Xavier, he was in fact Cassandra 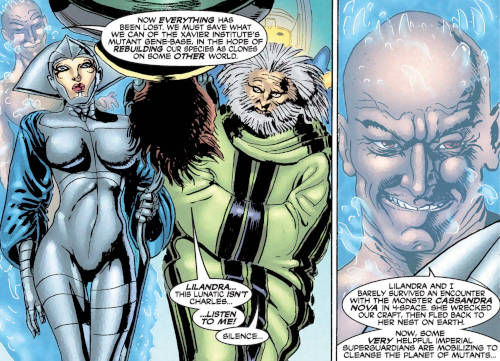 Nova, an evil psychic entity known to the Shi’ar as a Mummudrai, who had taken over Xavier’s body. When she finally realized this truth, Lilandra fled and sent her guardsman Smasher to warn the X-Men. However, the malicious entity caught her soon after and dominated her mind. Under Nova’s thrall, Lilandra unleashed devastation upon her own empire, ordering her fleet to attack its own worlds.

Nova then forced Lilandra to send her Imperial Guard to kill the X-Men, and every other mutant on Earth. Fortunately for Lilandra, however, part of Nova’s plan involved the kidnapping of Cyclops and his ally Xorn, who subsequently escaped and rescued the empress from Nova’s clutches. [New X-Men (1st series) #126]

The X-Men defeated Cassandra soon after but, unfortunately for Lilandra, the damage was done. Her mind was badly damaged by the ordeal and, rather than return to the empire, she chose to 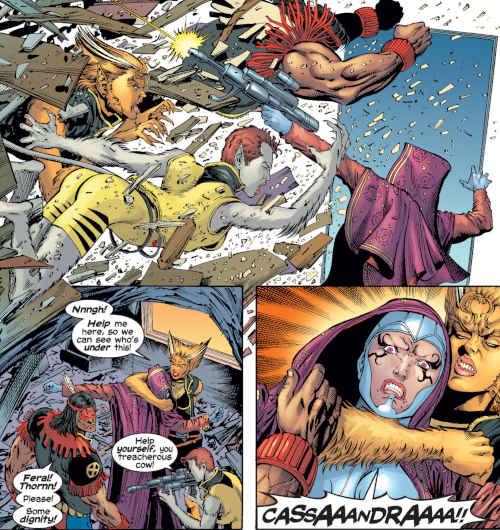 remain on Earth with some of her forces. Confused, she attempted to assassinate Charles Xavier with a Shi’ar sniper rifle, believing he was still Nova. Although the attempt fortunately failed, the worst was yet to come. An emergency Shi’ar senate was convened, which decreed the Shi’ar would sever all ties with Earth and Lilandra must do the same with Xavier. All traces of their union was annulled under Shi’ar law. [New X-Men (1st series) #133]

With her mental health greatly damaged, Lialndra was taken to a retreat to recover. During her recovery, a secret order loyal to the former Emperor D’Ken took advantage of the lapse in leadership to start making sweeping changes. They were thus naturally displeased when the empress had recovered enough to return to her duties, leading to the corrupt Chancellor Araki attacking Lilandra and kidnapping her.

The secret order might not have been so bold had they not found a surprising ally in the former X-Man, Gabriel Summers, also known as Vulcan. Vulcan had come to Shi’ar space on a mission of revenge against D’Ken, for killing his mother decades before. Instead, he fell in love with Deathbird, the sister of Lilandra and D’Ken, and under her influence he instead used his energy manipulation abilities to awaken D’Ken from his catatonia. With the support of his loyal secret order, D’ken immediately seized back control of his empire. He intended to execute Lilandra but she was freed by the X-Men and Starjammers. 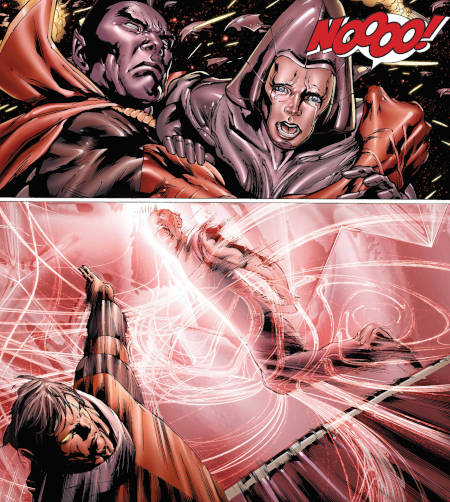 With the support of the Starjammers and the X-Men, Lilandra started recruiting allies. Though she had been the one who banished him, the deposed empress freed Ka’Ardum from his exile and convinced him to aid her. Together they set out amassing a small fleet of rebels and started spreading anti-D’Ken propaganda. However, when Lilandra learned Vulcan and Deathbird were to marry at the foot of the M’Kraan crystal and that D’Ken planned to execute Charles Xavier afterward, she had to act.

While Lilandra’s forces fought hard, she was helpless to act when Vulcan threw Xavier into the M’Kraan crystal. Fortunately, though he was injured, Xavier nevertheless survived. Things took a dramatic turn for the Shi’ar when Vulcan killed D’Ken and seized the throne for himself. He also attempted to murder Lilandra, to secure his seat of power, but she too survived with the aid of the X-Men. Outmatched by Vulcan and the Imperial Guard, Lilandra had the option to flee to Earth with Charles but instead chose to remain in Shi’ar space, along with the Starjammers and some X-Men, to lead yet another rebellion. [Uncanny X-Men (1st series) #475-485]

With Ka’Ardum’s fleet and the Starjammers, Lilandra lead attacks against Vulcan’s fleet, recruiting to her cause when they could. During one attack on the world called Feather’s Edge, a wild card entered the scene in the form of the Scy’ar Tal, a powerful species with a fanatical hate for the Shi’ar. Lilandra staunchly refuted the Scy’ar Tal’s claims that the Shi’ar stole the M’Kraan crystal from them millennia ago. The threat of the Scy’ar Tal was enough to force Lilandra and Vulcan’s forces to form an alliance against them. Unfortunately for Lilandra, Vulcan betrayed her almost immediately after, capturing most of her allies. To make matters worse, Ka’Ardum was impressed by Vulcan’s ruthlessness against the Scy’ar Tal and abandoned Lilandra to join the emperor’s side. With only a handful of allies left, things seemed hopeless for Lilandra. [X-Men: Emperor Vulcan #1-5]

With the help of Rachel Grey and Korvus Rook’Shir, Lilandra recovered the Starjammer and set about rescuing her other allies. Desperate to find where their friends were incarcerated, she tried 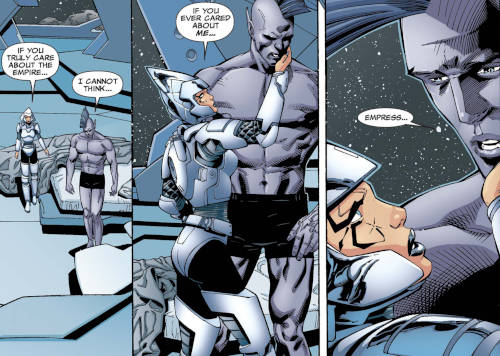 one dangerous move: approach Gladiator for aid. Playing on the feelings she knew he held for her, Lilandra hoped he might switch to her side, though she knew his loyalties to the throne were too strong. Although she was right, the former empress had a back-up plan; she had Rachel Grey read the Praetor’s mind. 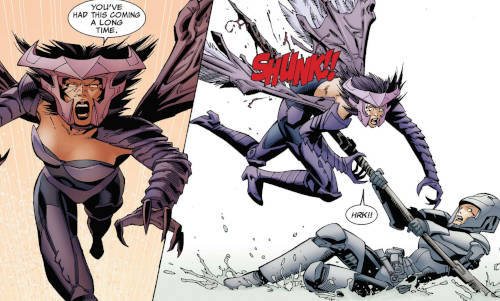 During the rescue of her friends, Lilandra came face to face with her sister Deathbird. The pair fought brutally, with Deathbird out for blood as she blamed her sister for the Empire’s near destruction. Unfortunately for Deathbird, Lilandra got the better of her sister and impaled her on some debris. Although Deathbird survived, she was left comatose. [X-Men: Kingbreaker #1-4]

With no other allies, Lilandra and her friends fled to Kree space. As the Kree, no longer under Shi’ar rule but now lead by the Inhumans, had initiated hostilities with the Shi’ar, Lilandra hoped they would assist with ousting Vulcan. As a guest of the Kree, the deposed empress attended the wedding of Ronan the Accuser and Crystal Amequillan. Unfortunately, the wedding was subsequently ambushed by the Shi’ar Imperial Guard, as Vulcan’s opening salvo in the war, and Lilandra was captured.

Vulcan intended to execute Lilandra immediately, but was talked down by Ka’Ardum, who convinced him that killing Lilandra would only make her a martyr. Instead, Vulcan instead decided to put her on trial for crimes against the empire, tearing her down in the eyes of her people. This was too far for Gladiator, who finally snapped; his love for Lilandra proving greater than his loyalty to the throne. The Imperial Guardsman freed Lilandra and the pair fled with the Starjammers. 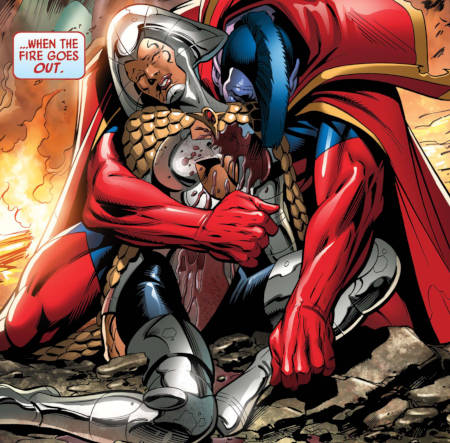 Lilandra decided small rebellions were no longer enough. Instead, she travelled directly to Chandiallar with Gladiator and the Starjammers to demand her title back as empress from the Shi’ar Council. Vulcan had led the empire to ruin and she now had the support of the people, so the likelihood she would succeed was high, despite opposition from Araki’s secret order. Unfortunately, before she could reach the council, the former empress was assassinated by one of Vulcan’s allies and she died in Gladiator’s arms. [War of Kings #4]

Although Lilandra was gone, her legacy lived on. Having lost the war to the Kree, the Shi’ar were absorbed into the Kree Empire. Gladiator was given the role of regent of the Shi’ar territories, which he led in Lilandra’s honor. [War of Kings crossover]