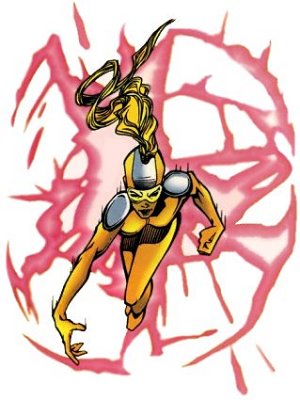 *NOTE: Locus' appearance changed dramatically over the course of her history. When she debuted, she had fair skin and a blonde ponytail, which was later revealed to be her actual hair and not mere ornamentation. Later her complexion darkened and when she was finally shown out of costume, she was clearly African-American. The reason for her shifting ethnicity was never revealed. 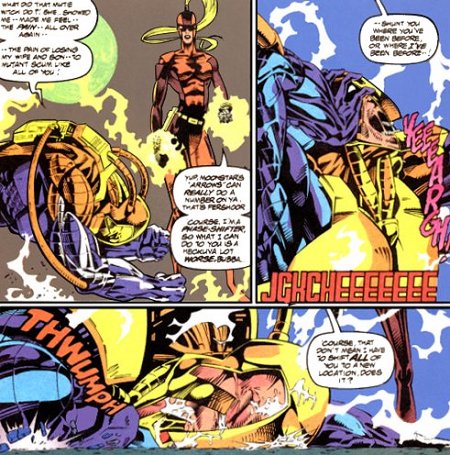 The mutant teleporter called Locus made her public debut as a member of the second incarnation of the Mutant Liberation Front (MLF). The MLF’s modus operandi was to acquire power and wealth as they worked towards mutually desirable goals. Their first mission was to kidnap and kill Henry Peter Gyrich, the director of Project: Wideawake, and a long-time anti-mutant advocate. During this operation, Locus proved that she was a cold and ruthless terrorist. She casually killed three of Gyrich’s security personnel including the bio-sentinel Hardaway, by teleporting away portions of their bodies with deadly results. Locus then teleported Gyrich to the MLF’s headquarters. The MLF claimed Gyrich as a prisoner of war and planned to expose him as a public oppressor of mutantkind. They hoped to foment public outrage among humans as a rallying cry that would help them build a massive army of mutant supporters. 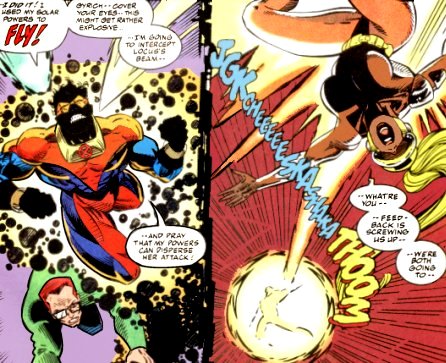 Locus and the rest of the MLF were soon under attack by X-Force, who had come to rescue Gyrich. During the battle, Locus expressed her attraction to Sunspot but this didn’t deter her from vigorously battling him. She was prepared to teleport Sunspot and herself away, but before she could do so one of Moonstar’s psychic arrows interrupted her energy field. As the battle progressed, the MLF began to lose control of the situation and decided to abandon the mission. As they prepared to escape, Locus attempted to finish Gyrich off. Her power was disrupted by an attack from Sunspot. Roberto’s solar beam interacted explosively with Locus’s portal and both she and Sunspot were teleported away to parts unknown. [X-Force (1st series) #27-28] 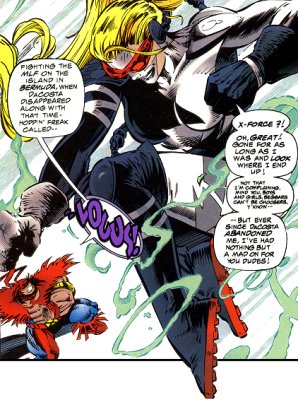 Locus made an unexpected re-appearance some months later, teleporting directly into X-Force’s headquarters. Her appearance had changed dramatically and she was surprised to learn that she had only been gone six months. She explained to X-Force that Sunspot had abandoned her during their travels. Even more cryptically, Locus revealed that not only had she traveled to the future, but also to the D’Barian and Shi’ar star systems, where she became fluent in their languages. Locus’s return to Earth was timely because Reignfire was now seemingly insane and taking the MLF apart. Locus teleported X-Force to Reignfire, where they rescued Moonstar just before Reignfire removed his helmet and revealed himself to be Sunspot. Before this revelation could be fully explained, everyone present turned to crystal as the reality-warping wave that created the Age of Apocalypse hit. [X-Force (1st series) #43]

Eventually, Locus rejoined the MLF, now under the leadership of Wildside. During a mission with the new team, Locus and her cohorts seized control of the Wakeman Oncological Research Center. The MLF targeted the Center believing it to be a government laboratory 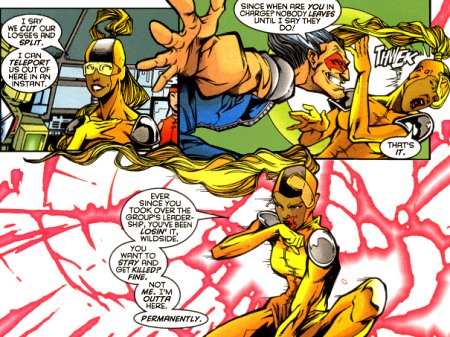 developing its own version of the Legacy Virus. Operation: Zero Tolerance had provided the MLF with this false intel in an elaborate ploy to capture the notorious terrorist group. Their latest act of terrorism garnered a great deal of media attention and the facility was soon surrounded by police and forces from Operation: Zero Tolerance. There was clearly tension between Locus and Wildside, whose methods were much more erratic than their previous leader's. When she suggested they cut their losses in the face of so many anti-mutant supporters and overwhelming forces, Wildside slapped her. Locus wasted no time in telling Wildside that he had lost it, quitting the team and teleporting herself away. [X-Force (1st series) #67] 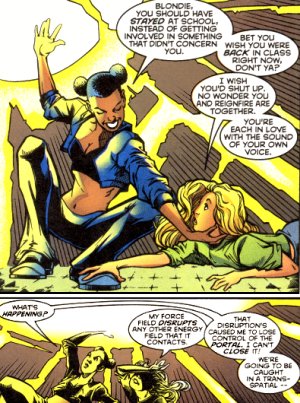 Now looking decidedly African-American, Locus once more allied herself with Reignfire, who was seeking revenge against Sunspot and X-Force. Locus was instrumental in helping Reignfire take control of DaCosta International. After weeks of following X-Force around on their “road trip”, Reignfire and Locus finally revealed themselves and captured most of X-Force one-by-one. However, Locus soon had to deal with the one member of X-Force who was not captured - Warpath, who had tracked his teammates down and plotted their escape. Locus and Warpath battled for some time until Locus finally gained the upper hand. She was about to teleport Warpath’s head off when X-Force’s friend Skids jumped on her, causing her to lose her concentration. Locus intended to use the same strategy against Skids, but Skids used her force field to disrupt Locus’s portal. Locus lost control and both young women were caught up in a trans-spatial backlash and vanished. [X-Force (1st series) #75, 78-79]

Locus and Skids found themselves in the Malhela Mountain Range inside Latveria. Locus was furious and started to fight with Skids, who suggested they work together to survive. While they were distracted, both young women were put to sleep by a demonic sorceress called Pandemonia. She took them to her nearby castle, where she had been living alone for the past six centuries after she was magically imprisoned on the mountain. Locus was reduced to a nearly catatonic state but her 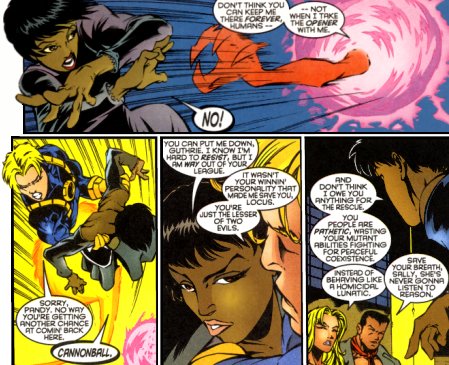 teleportation powers provided Pandemonia with the necessary means to escape Latveria. By tapping the memories of her two captives, Pendemonia learned of the existence of more young mutants and longed to recruit them to her cause. She magically transformed Locus and Skids into her loyal servants and the three of them launched a surprise attack on X-Force’s headquarters. The combined efforts of Dani Moonstar and the witch Jennifer Kale countered Pandemonia’s influence. Locus and the others were returned to normal when the sorceress was taken to another plane of existence. Locus was almost transported away with her - but luckily, Cannonball rescued her. Locus flirted with Cannonball, before telling X-Force that they are pathetic for wasting their powers fighting for peaceful co-existence. She then teleported away, warning X-Force to stay out of her way or she would finish what Reignfire started. [X-Force (1st series) #80, 85] 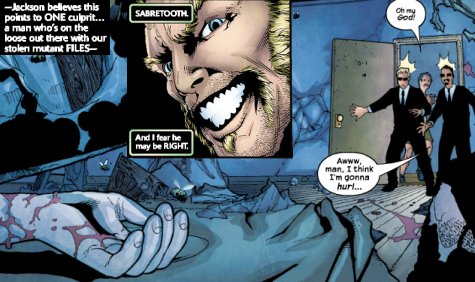 In the months that followed, Locus kept a low profile, and at some point moved to Chicago. But the young mutant was not completely forgotten. When the Weapon X program was restarted, they were in need of a teleporter to easily transport their mutant field agents. Locus was marked as a high priority recruit for Weapon X. Unfortunately, the deadly Sabretooth, a former subject of Weapon X, had escaped the program and was now hunting down the mutants that Weapon X was interested in. Apparently, Sabretooth managed to catch Locus by surprise and murdered her. Her decomposed body was discovered some weeks later by two Weapon X agents and her landlord. The answers to the many mysteries surrounding this vicious young mutant died with her. [Weapon X (2nd series) #1]