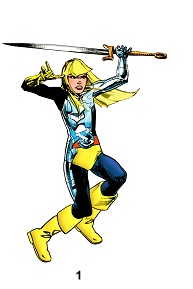 1) Upon joining the New Mutants Illyana was given the standard X uniform that next to every student at Xavier’s school wore in training. Soon her mysterious Eldritch armor started to appear on top if it whenever she used her magical abilities, slowly sprawling. [New Mutants (1st series) #15,19] As she became mistress of limbo and practiced darker magic more frequently Illyana would often wear different outlandish costumes during her stays in Limbo.

2) After their traumatic experiences at the Beyonder’s hands, Illyana and the other New Mutants were sent to Emma Frost for help and briefly joined their Hellions and wore their typical uniform: a tight, v-necked suit in two shades of magenta with a white triangle symbol over the heart. [New Mutants (1st series) #39-40] 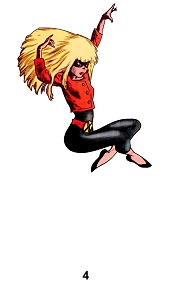 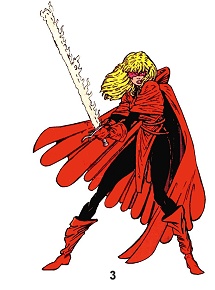 On three occasions, the New Mutants wore a set of graduating costumes that Xavier had designed for them. Once, it was because Mojo had reduced the X-Men in age and the younger team kind of became the X-Men in their stead. Another time, it was when they battled the Hellions in public without Magneto’s permission. The outfit consisted of black pants, a wide-sleeved tunic with a cowl, a cloak and long boots, gloves and a mask. They costume made Illyana look mysterious and more like a sorceress. Originally cloak and boots were of white color, but when Illyana was wearing the outfit a second time they were red. [Uncanny X-Men Annual #10, New Mutants Annual #3, New Mutants (1st series) #54-55]

4) When the New Mutants parted ways with the school’s current headmaster Magneto, they decided they needed new costumes. They decided they couldn’t wear the school uniforms or the graduating costumes designed by Xavier. The outfits looked rather cobbled together, as the new mutants created them of clothes and costumes they’d found on the attic. Illyana’s outfit consisted of black tight pants, slippers, a red short jacket in a vaguely military style, and a mask.[New Mutants (1st series) #61] 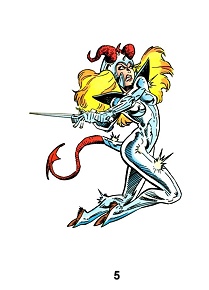 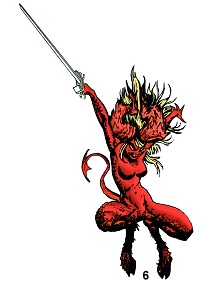 5/6) Around the same time Illyana was more and more corrupted by her dark side, and whenever she used her magic powers, she manifested several demonic traits like horns, red skin, furred calves, hooves and a tail. In this state, her eyes would glow yellow with there being no visible pupils. When her armor manifested, it would cover almost her entire body at the time. [New Mutants (1st series) #65, 71] 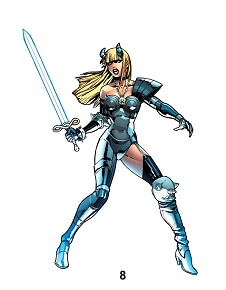 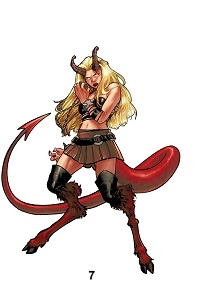 7) After Belasco recreated her as the Darkchild, Illyana was sporting all her demonic traits again. As if the huge horns, hooves and the tail were odd enough in appearance, she combined them with very skimpy revealing clothes, such as a halterless bustier, a mini-skirt and several bracelets. [New X-Men (2nd series) #38]

8) Her appearance instantly changed when she reclaimed her Soulsword. Except for much smaller horns on her head, all visible demonic traits were gone and the armor had partially returned as well. [X-Infernus #2] 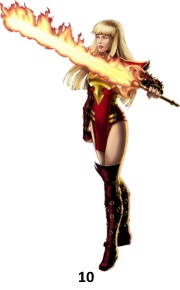 9) Apparently also having got rid of the horns, Illyana passes as fully human again. She and her teammates are all wearing the same New Mutants uniform. It seems to have been inspired by the uniformed look of the X-Men, when they wore black and yellow leather jackets. The New Mutants are wearing black jumpsuits, with a huge yellow X pattern from the shoulders to the thighs, along with yellow gloves and short yellow boots. [New Mutants (3rd series) #1]

10) When Illyana was possessed by a fragment of the Phoenix Force she took on a drastically different costume than before. Looking more like ornamental armour, the body was mostly red with a gold Phoenix on her chest. Her arms were completely covered by black spikey material that had gold accents, much like her knee high boots. [Avengers vs X-Men #5] 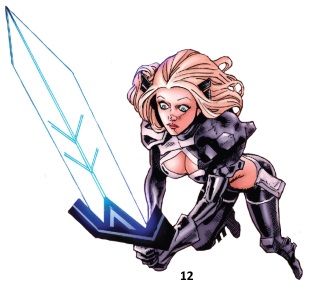 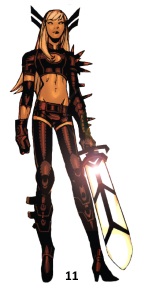 11) Still dealing with the effects of being taken over by the Phoenix Force Illyana took to dressing in a much more audacious manner. She wore a tight black crop-top that exposed her cleavage and mid-riff. Whilst the top stopped at the shoulder on one arm, her other was completely covered with harder armour that had spikes on it. Lower down she wore a very small pair of black hot-pants with a large silver buckle on them and her boots stretched all the way up to her mid-thigh. For the first time she wore a black, spiked head-dress. [Uncanny X-Men (3rd series) #1]

12) When Illyana re-joined the official X-Men again under Storm’s leadership she kept her previous look but altered it slightly. Her top had white borders to it that seemingly crossed over on her chest. She added a large collar as well that covered her entire neck. Later on she would ditch the hot pants and boots, instead opting for a pair of full length black pants. Her boots were now knee-high and had small spiked “wings” on them like her head-dress. She topped the look off with a white belt that had numerous pouches on. [Extraordinary X-Men #1]