More machine than man, the being called Manbot was comprised of a former Department H employee named Bernie Lachenay, who had been bonded to the remains of the Box armor previously worn by Madison Jeffries. The situation surrounding Lachenay’s transformation into Manbot is unknown, as is how much of Lachenay’s memories remained following his transformation. In fact, his speech patterns consisted of a robotic sounding voice, with whirs and clicks during his sentences. It’s also unknown how Department H acquired the Box armor (as it was not their property). During Madison Jeffries’ brief tenure with the new Alpha Flight team of which Manbot was a member, Jeffries never brought up the question, and neither Manbot nor Jeffries even acknowledged each other. 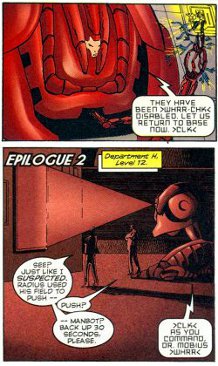 When the Canadian government re-instated a fully-funded Alpha Flight team, supported by a reinvigorated Department H and overseen by the devious General Jeremy Clarke, Manbot was one of several new recruits foisted upon the team. The new Alpha Flight’s baptism of fire involved the team going up against a terrorist faction. Though Manbot barely factored in the combat against the terrorists themselves, his analytical abilities located the chemical weapons that the terrorists had at their disposal and easily disabled them.

In truth, Manbot’s main purpose as a member of Alpha Flight was not for combat, but to record their actions, spying on the team for General Clarke. The recordings he made were then replayed to Department H’s monitoring division. However, an experienced Alpha Flight veteran, Vindicator, was already suspicious of Manbot’s placement on the team. [Alpha Flight (2nd series) #1]

Manbot accompanied the veteran members of Alpha Flight when investigating mysterious occurrences in Orloo, and demonstrated his ability to access Department H records remotely. Manbot was also an asset when Alpha Flight went up against their old foe, Mesmero, as the villain was unable to put Manbot under his control. 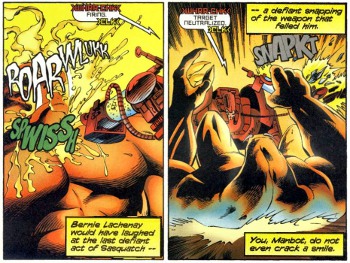 When Manbot’s teammate Sasquatch attacked the team while under Mesmero’s influence, Manbot requested to Department H that he use lethal force against Sasquatch. Though the request was denied, Manbot was instructed to use a nerve-toxin against his teammate, and Sasquatch snapped the weapon, breaking it off Manbot as he was rendered unconscious. Manbot was preparing to capture Mesmero, when the villain used the mind-controlled Vindicator to jam Manbot’s circuits. [Alpha Flight (2nd series) #3-5]

Despite the fact that Manbot was supposedly at the beck and call of General Clarke, Manbot also appeared to record his encounters with the untrustworthy administrator. More personally, Manbot began to remind Vindicator about her former teammate, Box. [Alpha Flight (2nd series) #7]

Manbot took part in Alpha Flight’s ambush of Wolverine after the team was told that he killed their missing teammate, Madison Jeffries. Manbot constantly recorded the team’s actions as they confronted Wolverine, relating them back to General Clarke at Department H. However, there were limitations with the range, as Manbot would sometimes step out of the cellular link-up. During the confrontation with Wolverine, Manbot was also mistaken by Wolverine for Box. [Alpha Flight (2nd series) #9, Uncanny X-Men (1st series) #255]

When General Clarke manipulated Alpha Flight into fleeing to the Microverse, Manbot accompanied the team. In fact, a Department H scientist who was supposedly helping Alpha Flight placed a retriever on Manbot so that the heroes could return. During a lull amidst the unrest that was taking place with the inhabitants of the Microverse, Vindicator tried to strike up conversation with Manbot, and Manbot told her that he no longer registered emotional responses. Nevertheless, Vindicator continued to try and build her rapport with him and personally 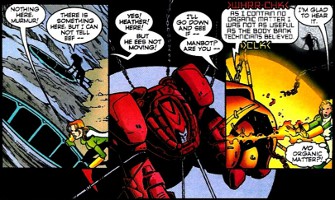 attempted to rescue him when Manbot was captured and taken to the Body Banks for harvesting. To Vindicator's surprise, she learned that the Body Banks had had no use for Mabot, as he contained no organic matter. Soon thereafter, Manbot’s receiver later transported Alpha Flight back to Earth when he informed his teammates that Department H was being destroyed. [Alpha Flight (2nd series) #10-11]

In the chaos that followed Alpha Flight’s arrival back in Department H, which was under attack by Alpha Flight’s enemies the new Zodiac, Manbot’s ability to link into 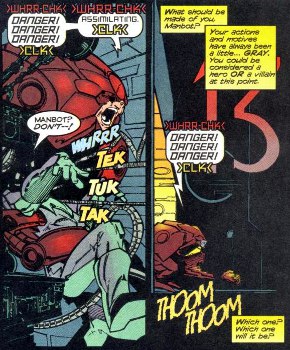 Department H’s computer system and access blueprints of the sprawling complex proved invaluable. After gaining access to a service lift that allowed access to the restricted Floor 13 and its Monitor Bar, Manbot helped fellow new recruit Flex gain access to a device that enabled him to see everywhere in Department H and relay that information to the other members of the team. Further, it was Manbot who identified that the Zodiac was trying to steal the deadly Nth Projector. Manbot was able to “assimilate” Flex into his body, and transport his young teammate to the location of the Nth Projector, instructing Flex to destroy it. However the Zodiac were able to escape with the weapon. In the chaos, General Clarke was seemingly killed. [Alpha Flight (2nd series) #12]

A new dawn occurred for Alpha Flight when General Clarke’s replacement, Mr. Gentry, took over the running of Department H and Alpha Flight. Manbot’s programming was altered and he was no longer used to spy on Alpha Flight, now fully participating on team missions. On one such mission, Vindicator again tried to build her rapport with Manbot and was shocked when Manbot revealed that he had recordings of Clarke talking about Alpha Flight. After he showed one of these to Vindicator, she told her teammate that she wanted to see all the files after the mission. [Alpha Flight (2nd series) #15]

When the new Alpha Flight team found themselves up against the surviving members of the original team in a race to save Canada from being destroyed by a new Weapon X, Manbot was injured in the battle. Despite his injuries, he was an asset to the team, revealing to them information that they needed, accessed from his files. Eventually, Manbot's injuries worsened, resulting in an electrical fire within his form and making it likely that he would explode. Truly touched at losing a teammate, Vindicator told him that she was sorry. Fortunately, Radius was able to extended his force field around Manbot, depriving the electrical fire within his system of oxygen, and delaying Manbot's deactivation.
Manbot continued to prove invaluable to Alpha Flight when they were attempting to shut down the Hellpounder. In the process, Manbot’s systems went into complete failure, though fortunately he was able to download his files onto a back-up disc before he was seemingly destroyed. [Alpha Flight (2nd series) #18-20]

Somehow, either Manbot survived his destruction, or his form was rebuilt, for when Alpha Flight went through a further restructure, he was placed on a new Beta Flight team. Since that time, though, Alpha Flight has gone through two subsequent restructures and the Beta Flight team went their separate ways. It is unknown what happened to Manbot but, given that he, by his own announcement, no longer had any organic material, it is unlikely that Bernie Lachenay was extracted from the Box armor. A more plausible fate for Manbot is that he was simply deactivated and is being stored in a Department H facility until the time comes that his many skills are once again needed for the service of Canada and the world.