Marvin Flumm is a man of Jewish descent born in Watford City, North Dakota. The human race possesses psychic potential to develop their minds further and manifest new forms of extra-sensory perception. As a low-level mutant, Marvin's mind was more awakened to psychic development than a normal human. He was recruited into S.H.I.E.L.D. and assigned to their burgeoning E.S.P. Division, hoping to harness psychic phenomena for the nation's defense.

Flumm's natural mutant aptitude meant he developed his abilities faster than the other potential psychics in the organization. However, Flumm's ambitions grew with his abilities. He intended to plunder the secrets of S.H.I.E.L.D. from the minds of his superiors and use the knowledge to his own benefit. Flumm also engineered his own black ops side project, the Mentallo Program, hoping to cultivate his own private stock of psychoactive operatives. [Secret Warriors (1st series) #24] When he was discovered, Flumm's powers warned him in time to flee from the agency. While on the run from S.H.I.E.L.D., Flumm used a stolen E.S.P. Division scrambler helmet to shield his 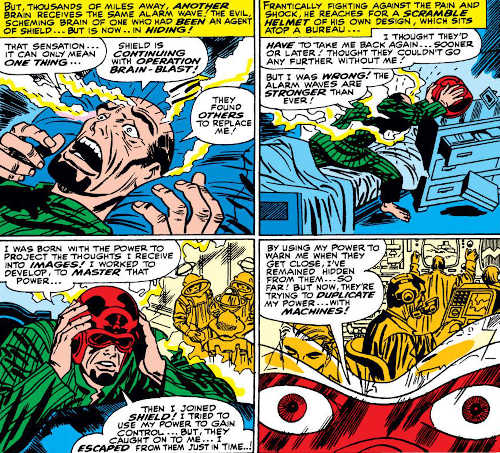 thoughts from his former comrades. Still determined to plunder S.H.I.E.L.D. for profit, Flumm crafted an identity for himself as Mentallo and sought out a partner. He cast his thoughts outwards and detected Norbert Ebersol, the Fixer, who at that moment was engaged in a daring escape from prison. Fixer was a brilliant innovator, able to engineer devices for every occasion. Mentallo probed Fixer's mind to enter his secret lair safely without setting off any of the traps. Intrigued by Flumm's abilities and plans, the Fixer and Mentallo began a criminal partnership.

With the assistance of Fixer's mysterious backers known only as "THEM," Mentallo and Fixer prepared to infiltrate S.H.I.E.L.D. Headquarters by force. Mentallo's psychic abilities made them forewarned of each security measure before it activated, and the Fixer soon had a solution for every problem. The criminal duo reached the inner sanctum of S.H.I.E.L.D. and took Nick Fury 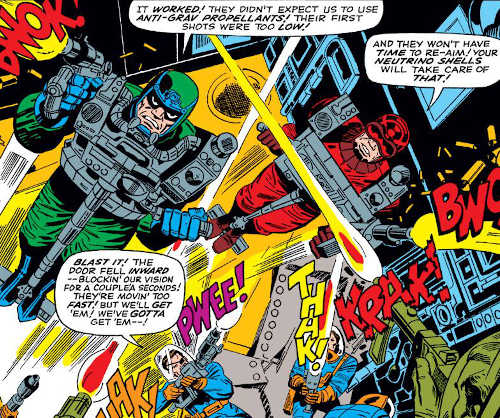 hostage. Fury had contingency plans in place, however, and concealed agents managed to damage Mentallo and Fixer's helmets. This left them vulnerable to a mental barrage from loyal psychics in the E.S.P. Division, which Fury weathered stoically while the villains lost heart and tried to escape. The disoriented pair were easily taken into custody after that, and Flumm's mental powers even faded due to the shock of the experience. [Strange Tales (1st series) #141-143]

Flumm spent months redeveloping his psychic powers after they failed him against S.H.I.E.L.D. To gain support for his efforts, he and Fixer were recruited by the crime boss Silvermane to become division chiefs for a new incarnation of the terrorist organization, Hydra. Mentallo lent his telepathic abilities towards operating as Hydra's reconnaissance chief once their resources helped him fully recover. However, Silvermane's Hydra came to the attention of Nick Fury and S.H.I.E.L.D. With the assistance of Daredevil and the Black Widow, Mentallo and the other Hydra chiefs were defeated. [Daredevil (1st series) #121-123]

[Note: In Spider-Woman: Origin #2, Mentallo was retroactively established as a Hydra contractor who seemingly implanted the young Jessica Drew with false memories to help shape her as a better field operative. This limited series was rocky in terms of continuity, however, and it's unknown whether Mentallo and Spider-Woman truly share any history.]

emigrates to KrakoaMentallo and Fixer continued operating together, and concocted an elaborate plan to interfere with the Presidential inauguration. By happenstance, Mentallo was nearby when Spider-Man returned to Manhattan from a visit to the future via Doctor Doom's time machine. He probed the web-slinger's mind and learned of the futuristic cyborg, Deathlok the Demolisher. Mentallo and Fixer planned an attack on the S.H.I.E.L.D. Helicarrier to encounter Fury's guest, the Thing. They used flying discs to access the airship and servo-pods to mentally dominate S.H.I.E.L.D. agents they encountered. The Thing was overpowered with a servo-pod of his own, and the villains used Ben Grimm to gain access to the Baxter Building and Reed Richards' own time machine. Fixer was able to summon Deathlok from the future and take control of his cybernetic programming, forcing him to operate as their servant. Deathlok attempted to strike the President with Fixer's mind control gun, but S.H.I.E.L.D. and the Fantastic Four prevented it. Mister Fantastic and the Human Torch personally captured Mentallo and Fixer after separating them from their equipment. [Marvel Two-In-One #26-27]

While in S.H.I.E.L.D. custody, Mentallo became the victim of a remote telepathic attack, one of several ESPers targeted this way. He was reduced to a comatose state, but eventually recovered his wits. [Captain America (1st series) #238]

Mentallo and Fixer were freed from captivity by Hydra, who sought Flumm's expertise. With the help of Hydra and the Fixer's technology, Mentallo probed the S.H.I.E.L.D. Helicarrier and determined the E.S.P. Division had uncovered unknown, evil emanations from a sub-atomic realm. Mentallo's probing wasn't enough, though, so they came at S.H.I.E.L.D. from another direction. Fixer modified the computer banks at Computrex Corporation to become a sentient, data-hungry digital entity. Computrex absorbed computing power from other systems, making it powerful enough to pierce S.H.I.E.L.D.'s databanks remotely and learn all the E.S.P. Division had stored on the Microverse. At fate would have it, Computrex's efforts attracted the HMS Endeavor, flagship of the Micronauts from that same sub-atomic realm.

Although Computrex was destroyed, Mentallo and the Fixer reasoned that Hydra would be eager to acquire living samples from the Microverse, and began to pursue the Endeavor. Mentallo sought to telepathically screen them from the Micronauts, but the tiny titans' commander Arcturus Rann had recently discovered telepathic powers of his own, and he matched Mentallo mind to

mind. The Micronauts managed to defeat their attackers, and Rann removed Mentallo's helmet, making him more vulnerable to a mental probe. Arcturus Rann learned about Hydra's interest in S.H.I.E.L.D. and the Microverse, but a mental failsafe implanted by Hydra erupted in Mentallo's mind, searing his consciousness and casting Flumm into a coma for "betraying" his masters. [Micronauts #24-25]

Mentallo remained in a coma for months until Fixer made arrangements to help his friend. Professor Anthony Power was a famous political advisor on foreign affairs who grew bitter towards the outside world when his son returned for war overseas mentally broken. Power had already tried once to use psychics and launch a "mind war" against Russia on America's behalf, and wanted to try again. He knew Charles Xavier had the telepathic power necessary for his goals, but would be hampered by scruples. And so, Fixer and Power made an alliance to restore and empower Mentallo.

Professor Power invited Xavier to his home under genial conditions at first, asking Xavier to use his telepathy to repair his son's mind, still trapped in a vegetative state years after the war. When Xavier probed the boy and stated repairing a mind was delicate work that would take time, Power took this as a rejection and moved on to using Xavier against his will. Fixer had constructed a telepathic conduit cage that would extract Xavier's telepathic power and feed it into Mentallo, pulling him out of his coma and giving him enough mental might to fulfill both of Power's goals. 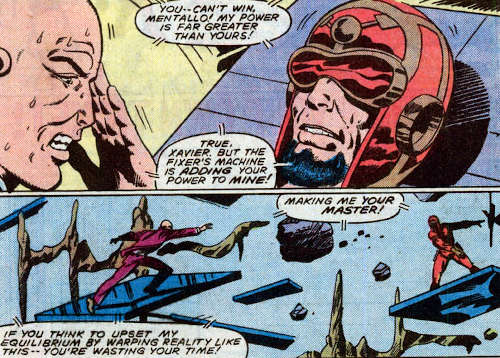 Spider-Man had been passing by and sensed danger, however, so he intervened on the plan. While Spider-Man fought the Fixer, Mentallo and Xavier engaged in a battle of wills on the astral plane. Xavier's experience in astral warfare made him overconfident, but he began losing ground as Fixer's machine continued extracting his power for Mentallo's use. Still, he eventually managed to prevail, and all the villains lay defeated. [Marvel Team-Up (1st series) #118]

Mentallo and the Fixer separated for some time after that incident, with Fixer working for Baron Zemo and the Masters of Evil. Shortly after the Avengers disbanded the Masters, Mentallo received word from Fixer to meet at one of their old hideouts. Expecting a new criminal venture with his old partner, Flumm was surprised when Fixer shackled him and held him prisoner. The "Fixer" was, in fact, the A.I.M. android known as the Super-Adaptoid, pursuing its own goals. The Adaptoid had only contacted Mentallo in order to copy his telepathic powers for itself, and left Flumm to be discovered by the Avengers after it departed. [Avengers (1st series) #287]

Marvin Flumm had rarely given much thought to his status as a mutant. He was ultimately a self-interested criminal with little interest in racial pride. Still, his abilities and origins brought him to the attention of the Resistants. With the Mutant Registration Act passing through Congress, those that refused to register were being targeted for arrest. The criminals known as Mutant Force assumed new identities as the Resistants and bolstered their numbers with other unregistered mutants. They freed Mentallo from custody on his way to the Vault and offered him membership in their 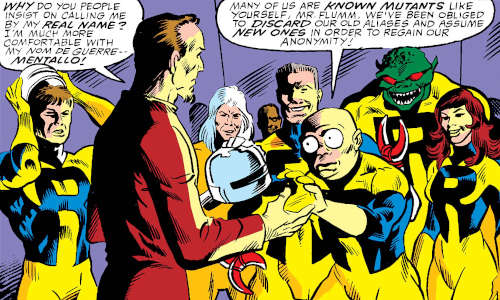 ranks. Seeing the opportunities in this association, Marvin Flumm accepted the Resistants' offer. Using the equipment at the Resistants' base and a new costume, Flumm disguised himself as a cyborg Resistant and rechristened himself Think-Tank. 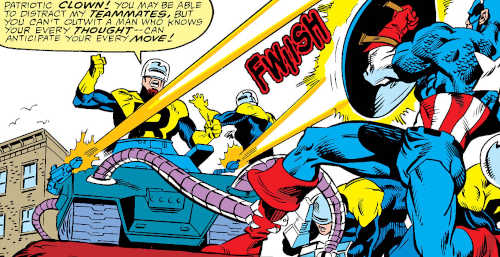 Walker, another Commission employee acting as the new Captain America. Crazed over the recent deaths of his parents, Walker tore through Think-Tank and the Resistants, leaving the entire group of dissidents incapacitated. [Captain America (1st series) #346]

After being transported to the Vault, Mentallo agreed to participate in experiments on his psychic abilities by Warden Truman Marsh to display his cooperation. During one experiment, a power surge erupted through the machinery. Back in his cell to recuperate, Flumm realized his powers were enhanced enough to overcome his cell's psi-dampeners. He coordinated an escape attempt with Venom in the next cell, using his abilities to overpower the Guardsman who came to check on him and release both prisoners. Mentallo was knocked out by Guardsmen reinforcements, but Venom was on the loose and opened all the cells on the block, causing a full uprising.

Mentallo recovered and began working with Venom, but a power struggle erupted between Brock and the Wrecking Crew's Thunderball over who should be in charge of the jailbreak. Meanwhile, the Vault got a call out for help, bringing in both the Avengers and Freedom Force to end the riot. As the heroes split up to work through the prison, Mentallo and his allies got the drop on Doctor Pym and Iron Man. Later, however, Iron Man turned the tables on Flumm. He used one of the Controller's control discs to mechanically access Mentallo's telepathy and broadcast a psionically 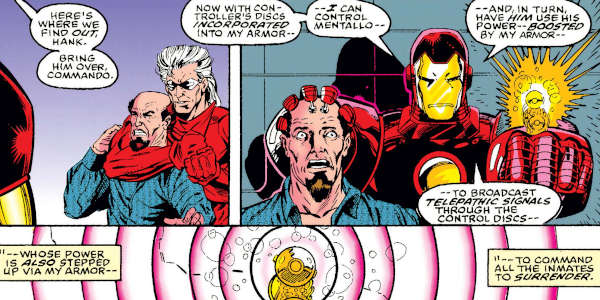 amplified order to stop fighting to all parties. The villains and heroes were forced to work together once they learned the warden had set a bomb to kill everyone rather than risk a breakout. [Marvel Graphic Novel #68]

Flumm was involved with a number of small ventures after that, with minimal success. He and Fixer attempted to assassinate the Hulk and the Thing, but the heroes barely even noticed. [Incredible Hulk Annual #18] Mentallo attended the A.I.M. weapons expo on Boca Caliente where a gaggle of super-villains got in a fight with Captain America. [Captain America (1st series) #411-412] He was recruited for the New World Order by the Red Skull, seemingly by force. Using technology to enhance his powers, Mentallo was able to brainwash the Hulk into serving the Order, using imagery and conditioning involving his abusive father Brian Banner. Ironically, Hulk broke free of control because his partner Juggernaut complimented and encouraged him while fighting the Avengers, positive reinforcement he would never get from Brian Banner. [Incredible Hulk (2nd series) #403-404] Mentallo and Fixer were also part of the Inner Circle of the New Enforcers, planning to take control of the New York underworld. Their Outer Circle of field operatives were defeated by Spider-Man, Blood Rose and Nightwatch, and the Enforcers apparently never recovered. [Web of Spider-Man (1st series) #100]