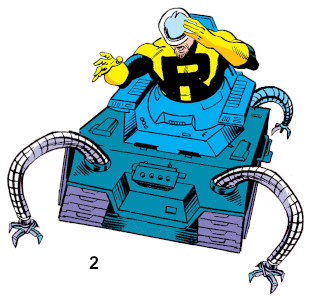 1) Mentallo's classic costume was a red jumpsuit with darker burgundy gloves, boots, and belt. His headpiece and Psycho-Helmet were of the same darker color. While working with the Fixer, Mentallo often wore a battle harness, flight gear, and other equipment strapped over his basic costume for additional utility in the field. [Strange Tales (1st series) #141]

2) In his Think-Tank identity, Flumm adopted the generic Resistants costume. Eerily similar to the X-Men's basic uniform, the Resistants wore yellow and blue-black costumes, with a large 'R' in the center of their chests. A chrome silver helmet resembling Robocop covered their heads. (Flumm's presumably contained his Psycho-Helmet equipment.) Think-Tank disguised himself as a cyborg, with a treaded chassis seemingly replacing his lower body, equipped with a variety of weapon systems. [Captain America (1st series) #346]

3) Mentallo would perform a light update on his costume in time. Although it retained the same color scheme, his jumpsuit was now replaced by a look with an open jacket. His helmet was larger and more bowl-shaped, with a jagged line resembling an EEG on the visor. While working for A.I.M., Mentallo basically wore the same costume, only in A.I.M.'s traditional yellow. [Astonishing X-Men (3rd series) #36]