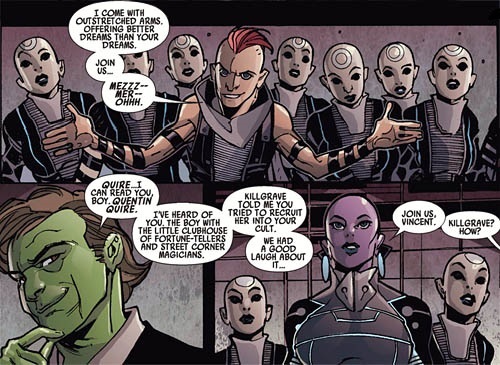 In the Age of Apocalypse, Mesmero worked for the mutant regime of Weapon Omega. He was responsible for the Sentinel manufacturing plants in New Jersey, using his mental dominance to keep the workers on task. However, he was targeted by Quentin Quire for recruitment into the Overmind. The young telepath had created a psychic pyramid scheme, starting with minor mental talents and slowly adding more and more powerful minds to his group-think cult. After incorporating Purple Woman and Moondragon, he moved on Mesmero and succeeded in bringing Vincent under his control as well. 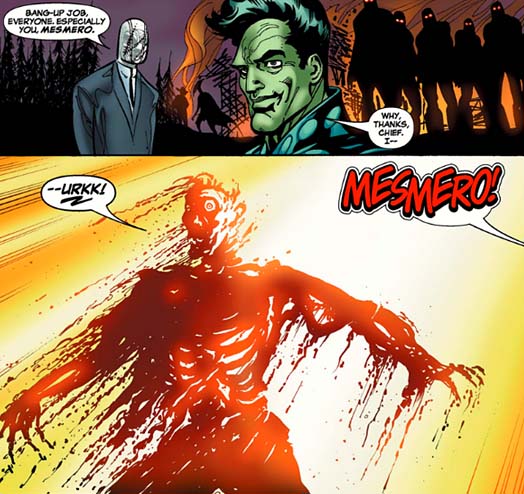 In Weapon X: Days of Future Now, the War of the Programs unfolded without the interruption of M-Day. A restored Mesmero remained loyal to Brent Jackson, opposing forces controlled by Sinister, Malcolm Colcord and John Sublime. His hypnotic control of Agent Zero kept the former Maverick under his power as a sleeper agent. However, when Colcord's Sentinels located Mesmero and Jackson, the emerald hypnotist was killed with his puppet still entranced. Zero would go on to join the X-Men until years later when Colcord discovered the means to artificially reactivate the hypnotic triggers Mesmero installed in his mind, forcing him to kill the X-Men. 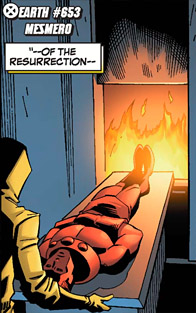 A version of Mesmero was recruited by the Timebroker, among other mercenaries. Told they had become unstuck in time, they were charged with fixing irregularities in various timelines in order to restore their own proper destinies. One of Timebroker's teams of operatives became known as Weapon X, as every member was also part of that organization in their own timeline. This team's missions were more brutal, however, and they had several early casualties, including Mesmero, Wolverine and Maverick. Mesmero's body was discovered by the Exiles much later in the Panoptichron.