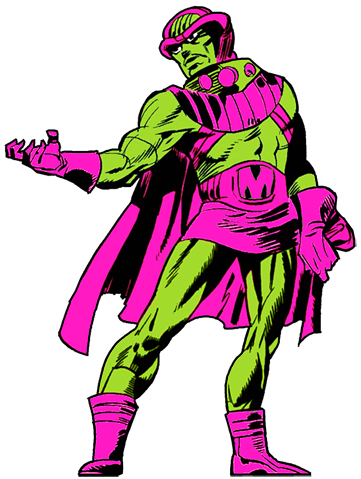 1) Mesmero originally wore a green and purple costume. Given his skin tone, it's somewhat hard to tell whether he was bare-chested and bare-legged, or merely wearing a body suit that perfectly matched his coloration. He wore a green and purple helmet and neck brace, holding up a purple cape, as well as purple boots, gloves and belt. He alternated between purple trunks or skirt. [X-Men (1st series) #49] 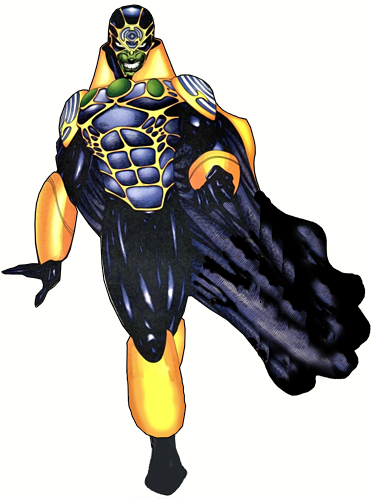 2) Mesmero's second costume was a fully purple body suit with golden webbing strands crisscrossing the surface. They gave the appearance of six pack abs and also circled three green orbs on his chest. Two more spheres of swirling purple and white were on his shoulders. His purple headpiece had the same golden lines and a swirling circle on his brow. [Alpha Flight (2nd series) #3]

3) With Weapon X, Mesmero wore a two-toned green body suit, with a darker green stripe down the middle and lighter green on the outside. He also wore a version of his original helmet and neckbrace. [Deadpool: Agent of Weapon X #1]

4) After getting his powers back, Mesmero adopted a black or dark green bodysuit which covered him completely except for his hands and head. The suit had a series of glowing circles on his chest and upper arms, with a green cape tied behind his shoulders. Mesmero also now had a set of lines tattooed on his shaved head, congregating at a circle on his forehead. [X-Men: Gold #2]