• Manipulate his physical dimensions,
allowing him to shrink and expand his
size, mass, density and certain physical
features

Scott Wright, the man who would become Micromax, was merely a popular disc jockey as far as most were concerned. Known to his listeners as Mr. Right, Scott used his mutant power to enhance his looks, boosting his confidence and helping to aid in his meteoric rise. [Excalibur (1st series) #61] However, at some point in his life, he was recruited into Britain’s covert outfit F.I.6, though this was mainly due to his form-augmenting power, not Scott’s covert skills, which were mediocre at best.

Case in point, Micromax was tasked with safeguarding a series of Druid artifacts, each housed at a separate location. While on stakeout at a store called  Arfurs Antiques, Micromax mistook 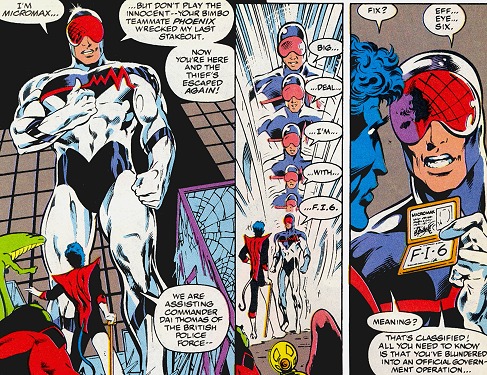 Excalibur’s Rachel Summers, aka Phoenix, as the purported thief and attacked her, when in fact it was actually an invisible creature with which Rachel was battling. The invisible burglar struck again at the Major Mainwaring Museum which Micromax was already surveilling. Unbeknownst to Max, Rachel’s teammate Nightcrawler and his training squad, the Technet, were there as well and, when the invisible burglar snatched its latest prize, the Technet pounced and ended up fighting Micromax instead.

On his third and final try, this time at the Brum-Art Gallery, Micromax was blindsided by a large wooden crate thrown by the invisible thief and knocked unconscious. The bandit tried to make off with the silver headband left inside, but the Technet interceded and defeated him. It turned out that the burglar was actually brain-dead and had been used as a tool by someone else. Since the Technet took home the win, Micromax was berated by his supervisor, Brigadier Inky Blott, for another lackluster performance. [Excalibur (1st series) #44-45]

Several days later the F.I.6 ESP unit was able to track down the person behind the thefts near some derelict warehouses in London’s dockland. F.I.6 didn’t want to take any chances and sent in the bulk of their forces to route him out. Because of Micromax’s repeated failures, Inky didn’t send him in right away but kept him nearby as back-up. 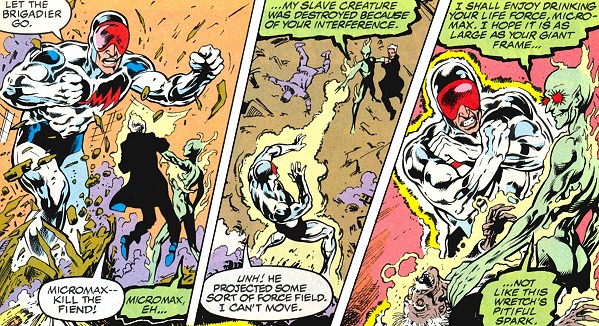 With horror, Scott observed as the person hidden inside, Necrom, proceeded to suck the life force of every human present. He left Micromax for last, blaming him for the destruction of his slave 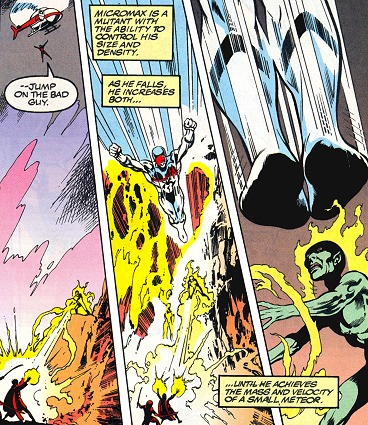 creature. Just before Necrom could lay his hand on Micromax, the F.I.6 operative shrunk to his smallest size. Unfortunately, he shrunk too quickly, causing him to pass out.
When Micromax regained consciousness, he found by Commander Dai Thomas and his people on scene. He filled them in on Necrom and his life-draining power and then joined Dai on his helicopter headed for Excalibur’s Lighthouse.

Upon arrival, they found Necrom already engaged in battle with some members of Excalibur. Seeking to redeem himself, Scott ordered the chopper to hold position above the fight and leapt out. Increasing his size and mass in mid-air, Micromax landed on top of Necrom with the force of a small meteor. Though this put a hurting on Necrom, he was still alive and immediately set his sights on Micromax. He narrowly avoided Necrom’s vampiric touch with a timely assist from Excalibur. Seizing his opportunity, Necrom fled for the Lighthouse, which gave him access to the multiverse. Micromax and his new allies could do nothing as Necrom fought Rachel Summers over the power of the Phoenix, which resulted in the explosion of his entire being. [Excalibur (1st series) #49-50]

With Brigadier Blott dead, the remaining assets of F.I.6. were eventually absorbed by the British intelligence group R.C.X.. Although Scott wasn’t interested in joining them, he was chosen as the U.K. representative at the first Pan-European Conference on Super Human Affairs. However, 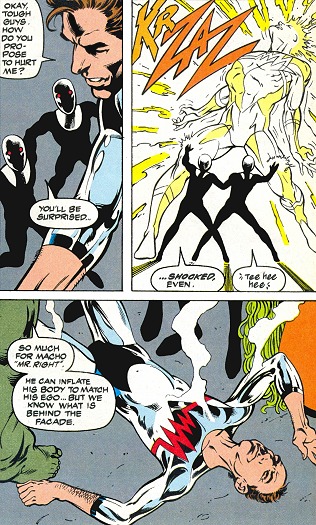 along with most other European heroes present, he was hypnotized by the former Nazi scientist Brain Drain into assassinating his representative country’s leader.  In his shrunken form, Micromax snuck into the Prime Minister’s apartment but was met by Aurora of Alpha Flight, who proceeded to knock him unconscious. Aurora’s teammates also dealt with the other brainwashed heroes. [Alpha Flight (1st series) #108]

On the civilian side of things, Scott leveraged his fame at Britain’s top radio station into a job opportunity in television. On the day of his interview, an attractive woman showed up at Radio One posing as a chauffeur sent by the TV execs. When Micromax entered the darkened parking garage, he was ambushed by the Cherubim for his refusal to join R.C.X., the British intelligence group that had absorbed the remaining assets of F.I.6. He was quickly taken out by AC-DC and, as he lay sprawled out on the pavement, he reverted to his true form: slightly pot-bellied and balding. This proved Micromax could not only grow and shrink, but alter his appearance as well. [Excalibur (1st series) #61]

Micromax was then taken to Cloud Nine, an R.C.X. base. There he underwent painful tests measuring his mutant abilities. When not being tested upon, he was placed in a stasis tube alongside captured members of Excalibur and former R.C.X. operatives. At some point, Nightcrawler and Cerise, who were highly monitored guests at Cloud Nine, discovered and freed their captured friends. They were soon met in battle with the combined might of the Cloud Nine elite, the Cherubim, Seraphim, Sky Pilots and Advocates. While initially their powers were blocked, Excalibur and Micromax found a way to come through. In the end, the head of R.C.X., Orpington-Smythe, was forced to surrender after getting his hand crushed by Captain Britain. [Excalibur (1st series) #62, 64-65]

Following Excalibur’s return from their next mission, Micromax was inducted as their newest member. His first taste of the Excalibur lifestyle came one morning during a training session. The Starjammers showed up without warning and explained they were there to retrieve a fugitive from the Shi’ar. Micromax immediately attacked them, much to Nightcrawler’s chagrin. He held his own against Raza and Ch’od, but the fight ended quickly when Cerise, the fugitive in question, willingly accepted her fate. Despite Kurt’s protests, Cerise departed with Corsair, but Rachel telekinetically held open the Stargate, allowing Nightcrawler, Phoenix, Micromax and Kylun to follow. 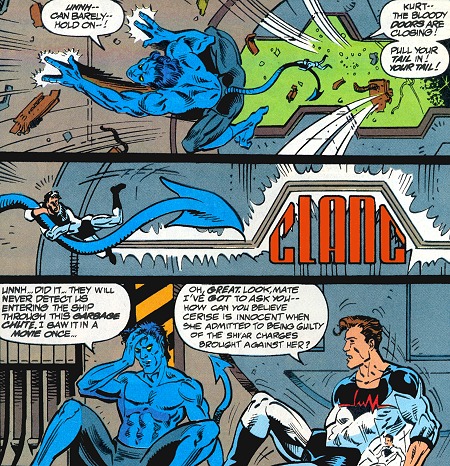 Once they arrived on the prison planet, Nightcrawler teleported to the Starjammer with a tiny Micromax riding his tail. There they learned the Starjammers also had doubts about Cerise’s guilt. They all returned to the planet’s surface where they linked up with Rachel and Kylun. Together they beamed themselves down into the hellish landscape of Krag, the prison population area. After finding Cerise, they learned the cold, hard truth behind her crimes and witnessed her sentencing, to remain with the empire and serve Lilandra. [Excalibur (1st series) #68-70]

Once back on Earth, Scott quit Excalibur and departed for the United States to work as head of security at the Brand Corporation. Possibly outer space didn’t sit with him well, or maybe he felt like Nightcrawler, as the team’s leader, was holding him back. [Excalibur (1st series) #71] Nevertheless, the next time he saw his friends at Excalibur was at Brian and Meggan’s wedding. There, he reconnected with Kylun. He confided with his old friend that he was laid off from Brand a month earlier and occupied his time watching soap operas. [Excalibur (1st series) #125]

The boredom didn’t last long for the size-altering mutant, as he was recruited by the British government again. One of his missions sent him to France, where he helped Le Peregrine and the Avengers defend against an invasion from the time traveling Kang and his shock troopers. [Avengers (3rd series) #46]

When M-Day struck, during which 90-95% of Earth’s mutants were depowered, Scott was one of the few to retain his abilities. Soon thereafter, Micromax was sent out on loan from the British government again, this time to the U.S. Several mutants of the “198” had escaped from the camp 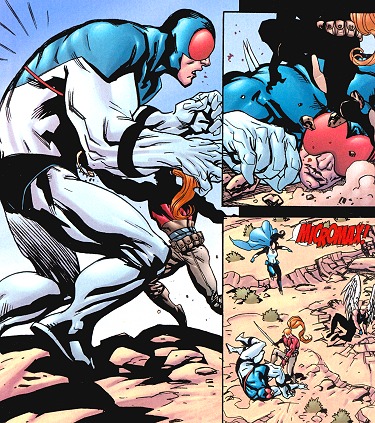 on the Xavier estate, and  Micromax joined Bishop, Sabra and the O*N*E program to bring them back. The runaway mutants were found hiding in the Nevada desert; however a retrieval team led by Cyclops found them first. When they arrived, the mischievous Johnny Dee took possession of Cyclops and forced him to attack Bishop, which resulted in an all out confrontation between the X-Men and the O*N*E operatives.

During the battle, Micromax proved to be a valuable asset as he got Bishop to safety and took out Cyclops. He grabbed Archangel out of the sky and repeatedly slammed him into the ground. Things were going great for the much-maligned Micromax until Shatterstar, swords in hand, skewered him in the gut while in his enlarged form. Max collapsed to the ground mortally wounded. A cease fire was called shortly after, once Val Cooper took over operations. This allowed Micromax to get immediate medical attention, which included a transfusion of Archangel’s healing blood. He was then loaded onto a helicopter and taken to a hospital. [X-Men: Civil War #1-4]

Scott survived and soon after joined a U.S. sponsored black-ops team codenamed Vanguard. After running a mission in which his miniature self entered and punctured the brain of an Al Qaeda operative, he was discovered, captured and tortured by the victim’s terrorist allies. When 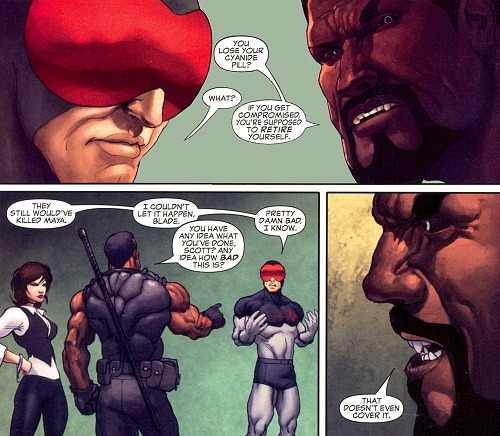 Micromax was threatened with the death of his niece, he gave up all he knew about Vanguard.  His fellow operatives were unaware of his betrayal until Craft, an uber-powerful telekinetic, was killed. A resourceful detective named Stacey Dolan helped discover the truth behind the intelligence leak but, before Micromax could be dealt with by his clandestine teammates, Craft appeared, not dead after all. With Vanguard compromised, Craft was ordered to kill all who remained. The resident telepath, Retcon, realized what he was going to do and made Craft believe he succeeded, though in fact everyone escaped. The surviving members, including Micromax, decided the only way to stay alive was to go into hiding and let the world believe them dead. [Marvel Comics Presents (2nd series) #1, 5, 7-12]

At least one of Micromax’ teammates was later exposed and tracked down by Vanguard. Whether or not Craft found Micromax as well is unknown. Hopefully, Scott is still out there right now on the airwaves spinning records somewhere. 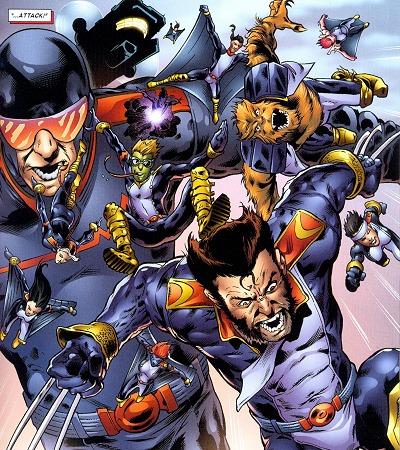 In the altered reality ruled by the House of M, Micromax was a member of the elite Red Guard. While he wasn’t on the main strikeforce, he was an accessory member and called in for fights that required more manpower, like Magneto’s attack on the Sapiens run San Rico. While the Red Guard were battling against the Hood’s Masters of Evil, Micromax had to take on the Absorbing Man.