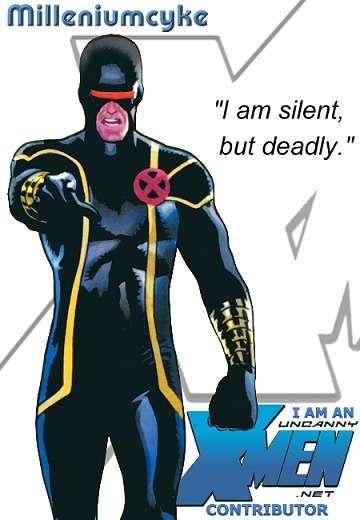 In the brief:
After I got back into X-Men in ’01 I started to reread my older stuff. I have one of those Swiss-cheese memories and it’s hard for me to remember details. So I decided to write down important events from each issue I read (like who died, plot developments, who was in it, etc.). It wasn’t long after, through X-Fan’s message board, that I found out about UncannyXmen.Net. It always seemed like Peter Luzifer and Monolith had an answer to everything. I decided to check out the site and was amazed. Not only tons of great content, but issue summaries. I decided shortly after that I wanted to help contribute.

I’ve worked on the Crossover section, helped design the message board, became a short-lived editor of issue summaries and eventually co-editor of the Alien Races and Timeline sections, and helped promote the site with Hasbro. I married in June 2002 and had a baby girl in June of 2003. I was deployed to Iraq in March of 2004 and returned in February 2005. I’m currently working on New Exiles and various back issues.

History:
I started reading comics in fourth grade when my friend took me to a local comic shop. He was into Wolverine and the X-Men so I bought Uncanny X-Men #205 as my first issue. It had a cool picture of Wolvie strapped down with rods and wires sticking into his body. I liked it and bought #204, #206-#209 and a few random others. At this point I didn’t know the “back-issue”/“current issue” concept and that there were cheaper issues to be had!

Eventually I stopped reading comics, but when the X-Men animated series came on TV ca. 1993 I felt the draw once more. I went back to my local shop, I think X-Men #18 had just come out, and I started back up. This time I decided to get full runs and I recollected from Uncanny #281 and X-Men #1 (Blue and Gold team split!) on up. This time I lasted for a while. I was even collecting X-Force, X-Factor, Generation X, Superboy and Iron Man. I made it past the AoA crossover, probably about six months, before I lost total interest. I was heading to Basic Training that summer and had different priorities.

While at college I stumbled onto the news that Colossus died. Well, my interests were piqued once more. I found more articles and a few X-Men message boards. My brain didn’t want me to go visit the local comic shop, but my heart won out. I told myself that I was only going to get Uncanny #290 and that was it. Yeah right! I was hooked again and I discovered something else that was wonderful. You can get tons of comics cheap on E-Bay. Thank you!! My collection quintupled in no time at all. Now I collect most X-Titles and a few others and I don’t see myself stopping for a while. Vive le X-Men!

X-Men confession:
My wife and I were unable to come up with a name for our baby if we had a boy. She wanted a Jr., but I preferred to have something different. Finally, she asked me to name some of my favorite comic book characters names. I listed all the X-Men with somewhat normal names and the only one she liked was Scott (Cyclops, my personal favorite). My only qualm was I didn’t know if my son would be happy being named after a comic book character. Well, we had a girl so it all worked out in the end.