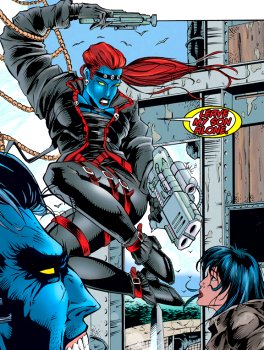 In the Age of Apocalypse, Mystique had apparently raised her son, Kurt who used her last name, Darkholme. The two seemed to have a loving relationship and Raven seemed devoted to Kurt. (Strangely, there were also hints that Sabretooth was his father). She was also protective towards Rogue. It was Mystique who brought the girl to the X-Men and entrusted her to Magneto’s care. In this timeline, Destiny had established a haven called Avalon in the Savage Land, a place of peace for all who could make the difficult journey there. Mystique was responsible for transporting people on the last leg of their voyage to Avalon. She was not above demanding almost all of the people’s belongings as payment, but had nothing in common with the pirates who preyed on and killed the escapees. For some undisclosed reason, Raven felt unworthy of Avalon herself and refused to set foot there, despite Destiny’s repeated invitations. Finally, she was forced to go there alongside Nightcrawler, as Magneto had asked them to bring Destiny to America to help them and the stranger, Bishop, in an attempt to correct the timeline and end Apocalypse’s oppressive rule. 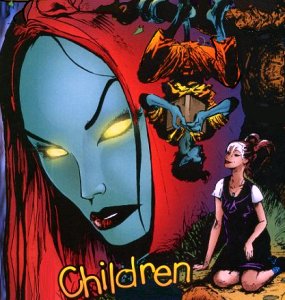 series) #98. Naming him Michael, Mystique kept her son secret from the public, even from her teammates in the Brotherhood of Evil Mutants. Later, Mystique adopted Rogue, who snooped around the house and eventually found Michael hiding in the attic of the house. They became friends and planned to flee but they were confronted by the Brotherhood. Unaware of Nightcrawler’s existence, they assumed he was an X-Man being sent to attack them. Avalanche, Blob and Pyro ended up paralyzing Michael in battle. Michael urged Rogue to go, to be free for both of them, because he couldn’t teleport. In response, Rogue kissed him, absorbed his psyche and ran away. As a result, Mystique lost both of her children that day. Later, Rogue faced Mystique one last time, displaying Michael’s physical features. 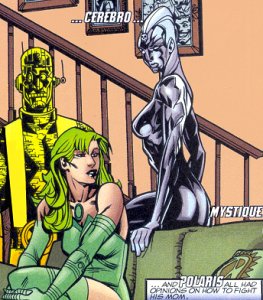 Little is known about the Mystique who was native to the Mutant X reality. She was a shapeshifter as well, but this Mystique seemed to have a silvery, metallic template form. Although she was seen as a member of the X-Men, her connection with Nightcrawler and Rogue, who were among also members of the team, was never explained. It is possible that she was meant to be mute, as she never spoke a single word in her appearances.

Though her fate was not shown, it can be assumed that Mystique died in the conflict with the Beyonder, like nearly every other super-powered individual of the Mutant X universe. 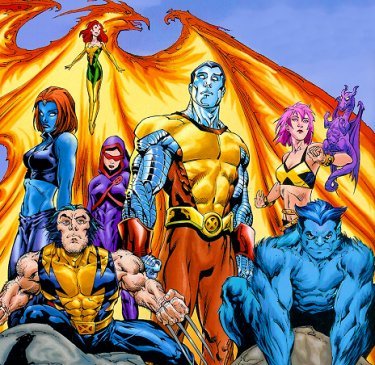 In yet another reality, Professor X and Magneto formed the X-Men together. Rather than a school for gifted youngsters, Xavier and Magneto formed the Good Shepard Clinic to help mutants in need of assistance in controlling their powers. Mystique and Wolverine were partners, perhaps even lovers, and served as Xavier’s “muscle”. Raven and Logan uncovered a threat to the Clinic and arrived just as a Sentinel attacked. Mystique and the other mutants fought back. Realizing that this was likely not the first threat they and other mutants would face in the future, the mutants finally became the familiar fighting force known as the X-Men. 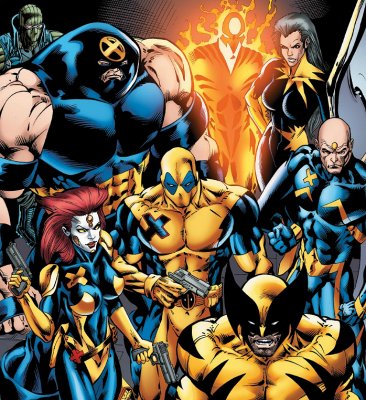 In the alternate timeline depicted in Weapon X: Days of Future Now - a variation of the classic Days of Future Past reality - Malcolm Colcord and his Sentinels exterminated the X-Men six years into the future to spite his old nemesis, Wolverine. Mystique's children, Rogue and Nightcrawler were among the dead. Seven years later, when Logan eventually recovered from the injuries Colcord had inflicted on him, he set about rebuilding the X-Men with members who could do what needed doing. Mystique was added to the roster for her ruthlessness, and her desire for revenge against the Weapon X program that murdered her children. As part of the team, she adopted a pale white complexion rather than her natural blue hue. Alongside the likes of Juggernaut, Deadpool, and Agent Zero, the new X-Men waged war on Colcord's Weapon X program and their Sentinel plants for five years. Eventually, however, Colcord determined how to reactivate old post-hypnotic commands in Agent Zero's mind that had been dormant since the death of Mesmero. Zero was unleashed on his teammates, killing the majority of the team during a Danger Room session. Mystique was one of the casualties, suffering a bullet through the brain. 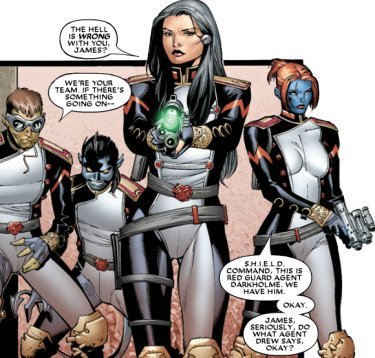 When Wanda Maximoff reconstructed reality into the House of M, Mystique was reborn as a member of Magneto's SHIELD organization. Raven was part of the elite Red Guard field agents under their squad leader, Wolverine. She fought alongside both Rogue and Nightcrawler, perhaps a result of the “wish fulfillment” aspect of the Scarlet Witch’s reality warp. Surprisingly, as part of their newly restructured past, Raven and Wolverine were lovers, as well as teammates. As part of their falsified history, Mystique had recently become concerned about Wolverine's miasma now that the war with the humans was practically over, and mutants ruled the world uncontested. Howlett longed for the “good ol' days”, when he fought enemies worthy of his skills. Looking into Wolverine's past, Mystique uncovered an old human training officer named Nick Fury whom Howlett had frequently clashed with. She then constructed an elaborate scenario to convince Wolverine that Fury was still alive and fighting for human rights, giving him an opponent to match wits against and a cause to fight for once more. When Wolverine went AWOL after remembering the truth behind the House of M reality shift, Mystique and the Red Guard initially suspected it was because of his hunt for Fury. Just as the Red Guard located Wolverine among the Human Resistance movement, they were caught in the psychic wave created by Layla Miller which restored her memories of the true reality. 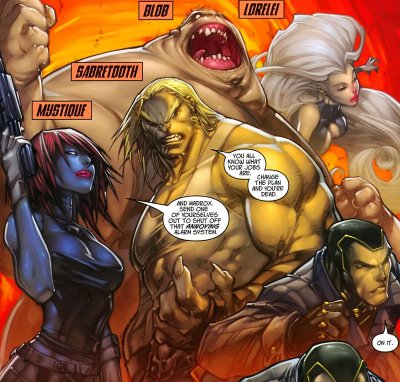 The Mystique of the Ultimate Universe began as an early recruit – and lover – of Charles Xavier. Little has been revealed about their relationship beyond the fact that Raven saw his darker edge and that it ended badly when he shifted his affections to Emma Frost. Embittered, Mystique ended up a loyal member of Magneto’s Brotherhood. She busted the Master of Magnetism out of prison and assumed his form so the authorities would believe he was still in custody. She was later relived by Mastermind and joined Magneto’s Brotherhood in their latest scheme which brought them into conflict with the Ultimates team. Following the devastation unleashed by Magneto’s Ultimatum Wave, Mystique tried to convince the X-Men to band together with the remaining members of the Brotherhood to better their chances for survival. The X-Men did not take kindly to her presence as they buried their dead and rejected her offer. The Brotherhood was soundly defeated by the few X-Men left. The world has now become an even more dangerous and oppressive place for mutants. How Mystique and the Brotherhood fare and what she will do to survive in this more hostile climate remains to be seen.

[NOTE: In the Ultimate Universe, Xavier had a cat named Mystique. It was named this by Emma Frost due to the feline’s bad behavior as a kitten. When the cat first appeared, fans speculated that this may be the actual Mystique acting as a spy among the X-Men. It was not until much later that it was confirmed that this was not the case and the cat's "origin" was revealed.] 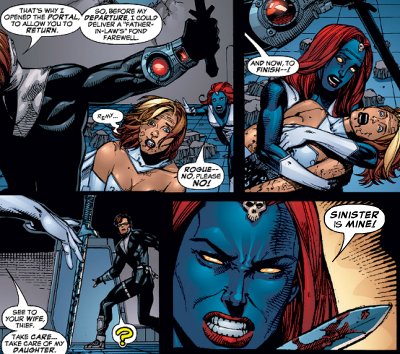 After years as their bitter enemy, Mystique eventually allied herself with the X-Men in The End. She spent time impersonating the Dark Beast while studying Sinister’s plots and experiments. But she was too late to stop Sinister, who had assumed Gambit’s form, from slaying Rogue. Raven got her revenge, using her intimate knowledge of Sinister’s methods to outwit and kill him. Following Rogue’s death, the true Gambit asked Mystique to care for their children while he saw that Sinister’s plans to harm the X-Men failed. Mystique and Gambit found common ground in their grief and she did as she was asked . From that day forward, Raven served as the fiercely protective grandmother and guardian to Rogue and Gambit’s children. 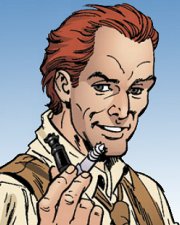 Perhaps the most distinctly unique counterpart of Raven Darkholme originated on Earth-797. This incarnation lived as a man named Raphael-Raven Darkholme and called himself Mystiq. Raphael had married Irene Adler and raised their daughter, Anna Raven (Rogue). The two died under unrevealed circumstances. Mystiq was attacked while visiting their graves and aided by the Sabretooth, a member of the time-hopping team called the Exiles. Raphael joined the group. The differences went well beyond gender. Mystiq was a calming presence among the Exiles, more adept at cooking and providing emotional support than battle prowess, though he managed to hold his own. He opted to wear a shirt and tie rather than a costume and rarely used his shape-shifting powers. After months of serving as an Exile, Mystiq and many of his teammates were integrated into the Crystal Palace outside time and space that served as their HQ. He remains there in stasis and a new team of Exiles has taken their place.

In the reality depicted in X-Men Forever, the course for mutantkind took a decidedly different turn. It was discovered that mutants were susceptible to “burnout” and that their mutant powers meant a much shorter lifespan. Mystique was one of only a few who proved immune to this phenomenon, perhaps because of her regenerative physiology. Nightcrawler had inherited this trait. Raven summoned Kurt and Rogue to Mississippi where she revealed her relationship with Kurt to them both. Through a freak accident, Rogue was injured and Kurt performed mouth-to-mouth in order to save her. Something went unexpectedly wrong and the two switched powers completely, leaving Rogue a furry blue teleporter and Kurt an outwardly human power siphon. Mystique’s plan was to transfer Kurt’s immunity to burnout to Rogue and it worked. Mystique returned a short time later and surprised everyone by announcing that she wished to join the X-Men. Her request was met with distrust despite her claims that she wished only to atone for the misery she had caused her children. As part of this penance, Mystique allowed herself to be tested to help in the search for a vaccine to protect against burnout. 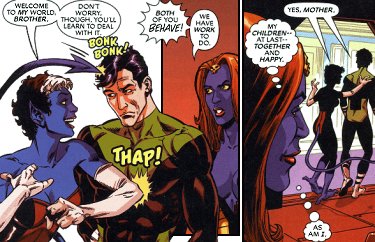 Mystique remained with the team, watching over Rogue and Kurt as they adjusted to their new forms and powers. The three spent a great deal of time together and Raven was happy to have a chance to rebuild her family. When Kurt was gravely wounded, she refused to allow her son to die. When last seen, she and Rogue were about to journey to Valhalla with Thor and Dani Moonstar to save him from certain death. 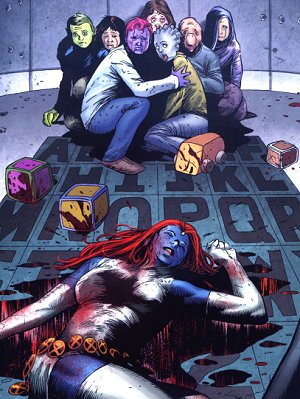 When one of Legion’s most powerful personalities created the reality warp known as the Age of X, the result was a new world complete with an alternate history. Mystique played a pivotal role in the early events that shaped mutantkind’s last refuge, Fortress X. Raven had been charged with the care of the younger surviving mutants. When a cadre of super-powered government agents led by Captain America was sent to destroy mutantkind and its stronghold, Mystique was one of the first to stand in their way. Despite her brave words, she was mowed down by gunfire. As the group marched on, they saw that Mystique was merely protecting a group of frightened mutant children. Her sacrifice led Captain America and his less blood-thirsty teammates to realize the horror they were sent to commit. They turned on their commander Frank Castle and defeated their mutant-hating teammates. They then sacrificed their lives to aid the mutants and stop the impending massacre. Their tactics inspired the idea for the “force walls” that would protect Fortress X for years to come.