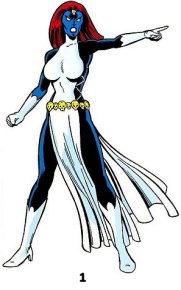 1) This was the first version of Mystique’s classic uniform: a white bodysuit and long skirt slit to the waist on each side, held by laces on each side, which made it unclear whether one saw skin at the sides or a blue-black bodysuit underneath. She also wore short white gloves and boots cut with numerous angles. Mystique's gold skull belt was not merely decorative. The skulls contained small weapons or other devices which Mystique could shift back to their proper form whenever she wished to use them. The overall impression was mysterious and threatening. [Ms. Marvel (1st series) #18]

2) Mystique later switched costumes to a slight variation of this outfit: instead of laces at the side, the white leotard covered her sides and the skirt was somewhat shorter. It was also clearer that she wore a black suit underneath. This look became her default costume and she has returned to it between other costumes. [Uncanny X-Men (1st series) #177]

-) Later on, Mystique used a third variation, the sides of the white dress were again open, but not connected by laces. Otherwise, the uniform was the same. [Uncanny X-Men (1st series) #266]

-) When Mystique was pressed into service by X-Factor, she initially wore a basic black bodysuit with a few white elements (shoulder area, boots). [X-Factor (1st series) #112]

3) Soon, she switched to another uniform. A bodice, short jacket and thigh-high heeled boots held by red straps in combination with a red weapons’ belt. The outfit first seemed to be made of black leather but was quickly exchanged for a white version. Mystique’s hair was also wilder and longer at the time. The impression was both sexier and – fitting with X-Factor – more militant. [X-Factor (1st series) #114-115] 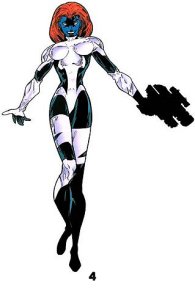 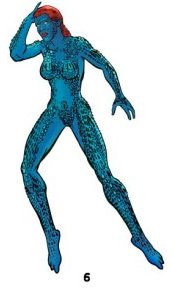 4) Her next X-Factor outfit was once more a bodysuit in her typical color scheme, reminiscent of her standard costume but without the skulls, the skirt or any other obvious weaponry since during this period Mystique began to use her shape-changing powers more aggressively.

-) When Mystique broke free from X-Factor, she alternated between several of the costumes she had worn before. [Uncanny X-Men (1st series) #359, X-Men (2nd series) #93]

5) After some time, she briefly wore a more elegant and sexier costume. This consisted of a full body suit in a shiny black material with a white center piece that covered her neck and shoulders and descended to a sharp point at her navel. Here only accessories were a gold skull choker and a bracelet. [X-Men Forever (1st series) #1]

6) When Mystique tried to save Toad, she was genetically changed by Prosh’s machines. As a result her default physical state now featured scales and her hair was shorted and slicked back. [X-Men Forever (1st series) #6]

[NOTE: This was clearly done to make Mystique look the same as she did in the successful X-Men movie. It is unknown whether this scaly state is still her default form and Mystique only shapeshifts into her old template because she likes it more.]

7) After breaking out of prison, Mystique settled for this simple white two-piece ensemble, a basic pair of white leather pants and a sleeveless crop top. [Uncanny X-Men (1st series) #405]

8) When Mystique was recruited to serve as an agent for Professor Xavier, she adopted a simple look made out of black leather. The costume was a midriff-exposing black halter top, along with black leather pants and black combat-style boots. She often added a weapons belt as needed for each mission. During this period, Mystique frequently pointed out that any clothes she wore were generated by her body, so she was really totally naked. [Mystique #1]

-) While working with the X-Men, Mystique returned to a variation of her classic costume. She did wear a variety of boots and gloves in varying style and lengths and her dress often had a loose cowl around the neck. Her skull belt now also featured a gun holster. [X-Men (2nd series) #188]

9) While posing as Jean Grey among the Dark X-Men, Raven wore a stylized version of her old costumes. The suit was primarily dark blue, with a white stripe that ran down the front from her neck to just under her belt. The belt had a red and black ‘X’ buckle and a series of white ovals around her waist (subtler than the belt of skulls she had worn in the past). She also wore long white opera gloves and white boots, each with an ‘X’ printed on the sides. When appearing as herself and not as Jean Grey, Mystique added her own personal touches to the costume. The belt of skulls was restored, as well as the white skirt flaps on the front and back. There was often a light blue accent on her dress as well. [Dark X-Men #1]

10) After the Dark X-Men were exposed and disbanded, Mystique appeared in a variation of the costume she wore while impersonating Jean Grey. Her belt now lacked the X belt buckle and the ovals were gold. This look also lacked the Xs on the boots and gloves, a clear sign that her days with an X-Team were over.