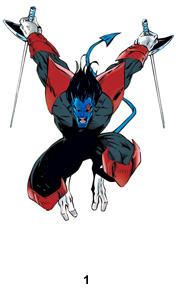 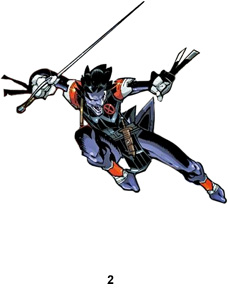 1) Nightcrawler’s X-Men uniform consists of a black, full-body leotard adorned with flared red armor on the shoulders, wrists and knees. Like his 616-counterpart, he wears white gloves and tabi boots. Unlike his 616-counterpart, however, he has a tattoo of a red stripe over his left eye and carries two swords, which he sheathes in scabbards on his back. [X-Men Alpha #1]

2) In the era that followed the fall of Apocalypse, Kurt adopted a more armored, medieval look resembling that of a knight. He dropped the black bodysuit and let his blue fur show on his arms and legs. In place of the bodysuit, he wore a black, high-necked chest plate with a red (or yellow) “X” over his heart and black tunic that covered his front and rear. This outfit included armored, red-trimmed shoulder pads. Interestingly, Kurt went mostly barefoot with this outfit, opting instead to wrap his heels and ankles with white fabric, which he secured with armored red cuffs. He also opted for only one sword, but supplemented it with a small dagger, which he affixed to his costume on his black belt near his waist. [X-Men: Age of Apocalypse #1] 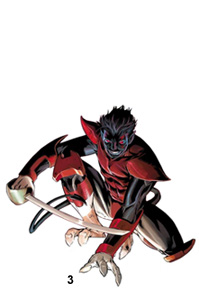 3) Later, Nightcrawler adopted a variant of his earlier X-Men uniform. This one had the same basic idea as his first outfit, only it included red fabric in the shape of an upside-down triangle that covered his torso from his shoulders to his crotch. He kept his armored forearm-guards and kneepads, but streamlined the armguards to include two armored straps instead of fully encompassing his entire forearm with armor. [Uncanny X-Force (1st series) #11]

4) When Nightcrawler joined X-Force, he adopted a uniform that fit with their black and grey theme. The basis of this outfit was a grey, full-body leotard with a black, V-shaped material that extended from his shoulders to his crotch. As usual, the fabric was flared at the shoulders. He wore black boots with his outfit and black cuffs on both his forearms and, depending on the variant of the outfit, a white or black “X” over his heart. [Uncanny X-Force (1st series) #19]