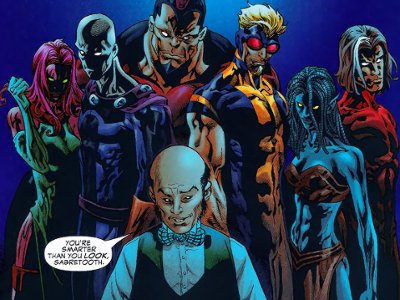 On their first mission, the Exiles inadvertently interfered with one of the wagers of the Grandmaster, Elder of the Universe. Infuriated at having lost, the Grandmaster tracked the Exiles through the multiverse and devised a scheme to take revenge on them. He located one Earth in the infinite multiverse where versions of the six original Exiles co-existed, and posed as the Timebroker to bring them together as a team of Exiles of his own. He directed this version of Nocturne and her teammates in saving their world from multiversal anomalies gone wrong, deliberately trying to attract the attention of the real Exiles. When the Exiles came to investigate, he wagered their defeat against his own counterpart on that Earth. Nocturne and the alternate Exiles defeated the current team at first, with Nocturne possessing the original Blink to fight alongside her Blink. Eventually, though, the Grandmaster's ruse as the Timebroker was revealed, and the Exile teams joined forces against him. [Exiles Annual #1] 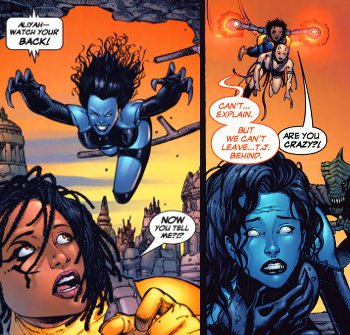 In X-Men: The End, Nightcrawler of Earth-616 eventually rescued Kymrah from Tullamure Voge and the Slavers. In retribution, the Slavers captured Nocturne and had her psychically and genetically rewritten to be one of their slaves. Along with Multiple Man and Siryn, Nocturne served the Slavers for a number of years before a deal between the Slavers and the Kree was interrupted by a Brood invasion. Aliyah Bishop intervened, rescuing the Phoenix pod containing Jean Grey and Nocturne before the planet was destroyed. After Jean summoned Nightcrawler from Earth, the two of them managed to undo the Slavers' manipulations of Nocturne, restoring her true self. Nocturne eventually came to live on Earth with Nightcrawler, Kymrah, and their children, including Kurt's son TJ, named after Talia.