The man known as Arkady was born in Novorossiysk, Russia during the time of the Soviet Union. Although his exact age is unknown, Arkady was apparently born shortly before the Great Patriotic War (known as World War II in the West) and came of age under the Communist state. In adulthood, Arkady joined the GRU Spetsnaz, distinguishing himself in a border guard commando unit. He was a skilled soldier, earning party recognition for his brutal efficiency. However, Arkady did not restrain his brutality to the battlefield. During his spare time, the butcher turned his attentions on innocent people. He was particularly known for kidnapping and murdering young girls. 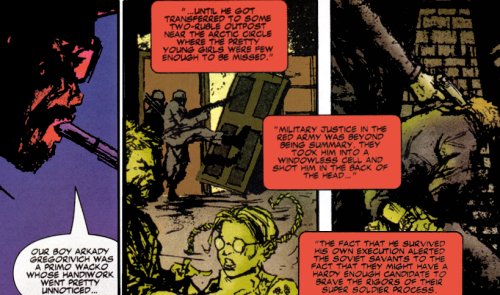 Arkady’s deviance went unnoticed for some time, until he was eventually transferred to a Soviet outpost near the Arctic Circle. Missing children were noticed much faster in such a small town, and the military police caught Arkady red-handed as he was strangling the life out of his latest victim. His court-martial was a formality and afterwards the other soldiers decided to carry out his sentence themselves. Arkady was carted into a windowless cell and shot in the back of the head at point blank range. But he didn’t die. Arkady’s mutant powers kicked in and saved him from execution. They also brought him to the attention of the government, which was looking to perfect its own Super-Soldier program. Arkady was tagged as a candidate for augmentation, and the Soviets hoped to turn him into a living weapon. [Maverick one-shot]

Despite facing a death sentence if he didn’t cooperate, Arkady was not interested in becoming a Super-Soldier. He escaped from Russia and practiced his craft by using his newfound “death factor” to become a serial killer throughout Europe. His actions came to the attention of Interpol, but the Soviet Union intervened on his behalf, using political clout to hamper the investigation and prevent the media from learning about the mutant serial killer. They still hoped to retrieve Arkady for the Super-Soldier program, and promised his services to the various nations to ensure their complacency in the cover-up. 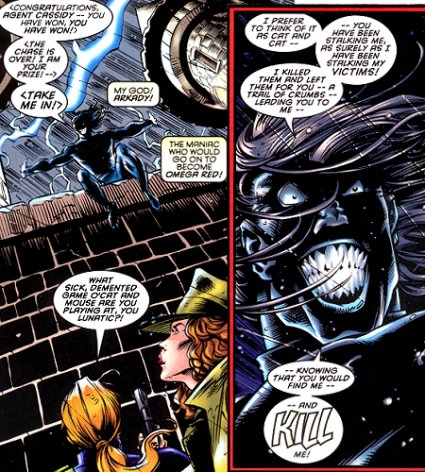 One man refused to allow Arkady to run about unmolested, though. A young Interpol agent named Sean Cassidy recognized the connections between the various murders, and also realized a cover-up was in effect. Cassidy went rogue from Interpol in order to hunt down Arkady against the orders of his superiors. Meanwhile, Arkady realized that the Soviet Union would never allow him to remain free, and they would eventually recapture him and force him into the program. To avoid that fate, Arkady began to deliberately provoke Cassidy, playing with him out of some sick joy for the “thrill of the chase,” and secretly hoping Cassidy would kill him before the KGB got to him first. Their dance concluded at Cassidy Keep in Ireland, where Arkady faced off against Cassidy and his ally, Inspector Magrite Deveraux. When Arkady failed to provoke Cassidy into killing him with words alone, he turned his death factor on Magrite, sending her to her death over the castle’s walls. The enraged Cassidy opened fire on Arkady, but even his barrage wasn’t enough to kill the murderer. Arkady was turned over to the authorities, and soon fell back into the hands of KGB scientists, who readied him for the Super-Soldier program. [Generation X #10-11]
NOTE: Marvel Comics’ sliding timescale makes it difficult to accept that Banshee (despite being significantly older than most of the X-Men) was active with Interpol during the Cold War fifty years ago. Nevertheless, this incident explicitly takes place prior to Arkady’s transformation into Omega Red in the 1960’s, and so must occur here in his personal timeline.
During the Super-Soldier program, Arkady received several forms of genetic and cybernetic augmentation. His body became larger, stronger and tougher on almost every level. He also served as the initial test subject for Carbonadium implantation. Carbonadium was the Soviet Union’s answer to Adamantium, developed by Russian scientists with the help of spies who recovered partial notes on Myron MacLein’s formula. Although not as durable, Carbonadium was cheaper and more malleable than Adamantium. In the final stage of his transformation into Omega Red, Arkady underwent a molecular bonding procedure with the Carbonadium similar to the one conceived of by Lord Darkwind, and eventually employed on Logan and Adamantium decades later. His bones were bonded with the Carbonadium alloy while his forearms were implanted with retractable tentacles made of pure Carbonadium as well.

As the bonding process was underway in an East Berlin laboratory, however, a unit of CIA operatives called Team X interrupted the procedure. Their stated mission was the recovery of a double agent named Janice Hollenbeck from the Soviet Super-Soldier program. Secretly, however, the operative named Creed had been charged with recruiting Arkady as a pawn for the puppet master known as Romulus. (Indeed, it appears that Romulus may have been responsible behind-the-scenes for the Soviets gaining access to the work of MacLein and Darkwind, in order to create Omega Red for his own purposes). Neither mission called for Omega Red to be as near completion as he was, forcing Team X to improvise. Creed distracted security by blowing up Arkady’s transformation tank, while Logan and North retrieved Janice and the Carbonadium Synthesizer, an irreplaceable device necessary for the forging of Carbonadium alloy. 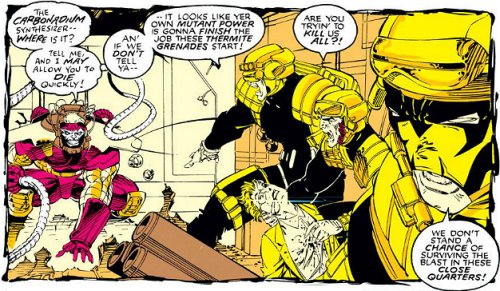 Still weak from the incomplete bonding process, Omega Red attempted to capture Team X and recover the C-Synth. Janice Hollenbeck was killed, but the CIA operatives otherwise escaped and the C-Synth was lost to Russia. Without the C-Synth to properly calibrate the Carbonadium in his system, Omega Red would grow progressively weaker over time. His death factor could temporarily satiate him by borrowing additional life energy from other sources, but it left him constantly dependent on new victims to remain active. [X-Men (2nd series) #5-7]
NOTE: The stated cause of Omega Red’s affliction has been contradictory over the years. Early stories claimed the spores from his mutant death factor were “backing up,” forcing Arkady to regularly drain life energy from others lest the death factor turn on his own life energy. The C-Synth would have stabilized the Carbonadium in his system in such a way that the metal absorbed the spores and neutralized the death factor’s ill effects. Later stories, however, claimed that Carbonadium itself was radioactive, and the metal bonded to Arkady’s bones was killing him, similar to Wolverine’s “Adamantium poisoning.” The life-absorbing death factor kept him alive, and the C-Synth would have disabled the Carbonadium’s radioactivity to prevent it from harming Arkady further. Additionally, despite the name, Omega Red’s death spores have no connection to the spores infested in Baron Wolfgang von Strucker.

The Soviets attempted to employ Omega Red as a field operative despite his weakness, and he assisted the Flagwatch program in investigating an unknown mutant on the Siberian tundra. An Inuit fisherman named Katu Kath was electromagnetically reactive and unwittingly distorting Soviet military transmissions around the Arctic Circle. Omega Red and a military detachment attacked Katu’s village, killing everyone present. After the military officer on site informed Arkady that Katu’s power worked by refracting the energy through his fingertips, Omega Red solved the problem by ripping off the fisherman’s arms. [Cable (1st series) #10]