O.Z. Chase, the grizzled bounty hunter from Los Angeles, California comes from a large, extended family. As a boy, O.Z.’s unruly behavior landed him in reform school, where, among other things, he learned advanced lawbreaking skills like lock-picking. When he grew up, O.Z. rode a motorcycle and consorted with bikers, belonging at one point in his life to a biker gang in Fresno, California. As an adult, Chase married—and divorced—three times. Each of his ex-wives demanded alimony payments, placing a sizable financial strain on Chase, who also voluntarily supported many of his relatives. These expenses made it hard for Chase to afford even his modest lifestyle. He did, however, allow himself to indulge in one vice: Cuban cigars illegally imported from Havana.

At some point, Chase decided to put his unsavory skills to use by working as a bounty hunter. He would track down suspected criminals who skipped bail and return them to their bail-bond holders for payment. It was through this line of work that Chase obtained his canine companion of questionable loyalty, the intimidating wolf Cerberus, whom he named after the legendary three-headed dog of Greek legend which guarded the gates of Hades. Chase accepted the dog as payment for a job, although he would later come to regret this decision. Cerberus grew to share his master’s taste for Cuban cigars. Unlike his master, however, he ate rather than smoked them. 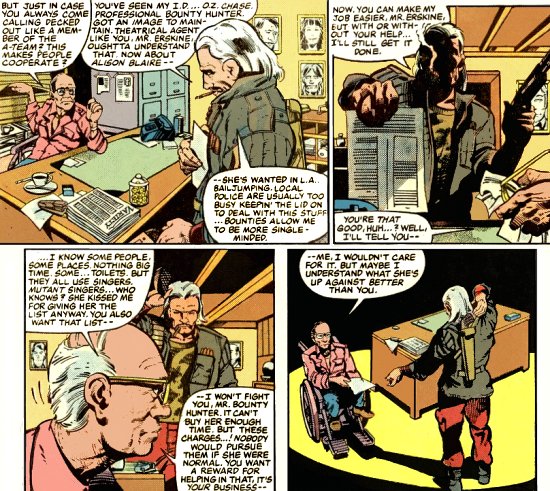 One day, O.Z. was hired by a notable firm called U.S. Bailbonds to retrieve the mutant singer Alison Blaire, aka the Dazzler, who had allegedly skipped bail stemming from charges related to a high-profile display of her powers. The firm offered Chase an ample sum of money, and paid half of his fee up-front, thus binding him to the deal. Although the charges against Alison seemed flimsy, Chase accepted the offer and began tracking the fugitive starlet. His suspicions about the bounty only grew as he followed lead after lead, all of whom vouched for Dazzler’s character and heroism. Eventually, he traced her to Arizona, where he apprehended her after her latest stint of selfless heroism. [Dazzler (1st series) #38-39]

On the drive back to Denver with Dazzler safely apprehended in his truck, the unexpected happened: Dazzler disappeared out of the cab at the exact moment the vehicle’s engine died. [Secret Wars II #4] With his target gone and his truck dead, Chase had no choice but to traverse on foot to the nearest town with Cerberus at his side. Upon arriving, he was ambushed by a trio of super-powered bikers called the Outriders, who claimed they wanted to free Dazzler from captivity. Chase was overwhelmed and, receiving little help from his ‘loyal’ dog, succumbed to their attack. The merciless beating he endured was interrupted only by the timely return of the Dazzler, who refused to allow a group of roughnecks to beat on a defenseless man, even when that man was her captor. After Dazzler and her new friend, the Beyonder, defeated the Outriders, she agreed to continue to Denver with Chase in order to face the charges against her. [Dazzler (1st series) #40]

Considering the circumstances, O.Z. and Alison got along quite well, although she took umbrage at his constant cigar-smoking. Upon arriving in Denver, they teamed up to discover who sent the Outriders after them. Chase grew tired with the diversion, however, and told Dazzler he needed to turn her in to his employer in order to collect his payment—and protect his career. Despite her protests, he assured her that, if the charges against her were bogus, the justice system would acquit her. 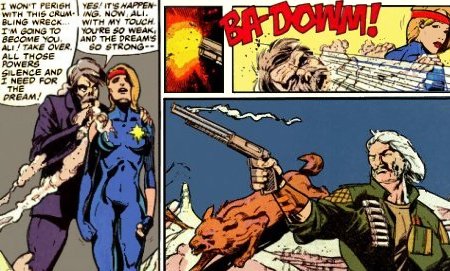 To his surprise, his representative from U.S. Bailbonds did not meet him at the agreed-upon exchange point; Alison’s father, Carter Blaire, did instead. Chase received a verbal lashing from Judge Blaire, who proved that the charges against his daughter were fraudulent. However, after Dazzler left with her father, Chase, suspecting foul play, searched his hotel room and discovered the decomposed remains of a human being. This prompted him to make an anonymous phone call to the police on Dazzler’s behalf. His guilt in abandoning her soon overwhelmed him, though, and he set out after her. He found her just in time to save her from the villainous Dust, who, having worn out Carter’s body, intended to seize Dazzler’s and make her his new host -- a proposal that would have been lethal to her. [Dazzler (1st series) #41]

Unfortunately for Chase, Dazzler departed as soon as she learned her mother was being held hostage by Dust's wife, Silence. Left behind, Chase contacted Dazzler's friend, the former X-Man Beast, for help. They pursued Dazzler to her whereabouts in Tulsa, Oklahoma and ambushed Silence’s facility, creating enough of a diversion to allow Dazzler to fight back against her captors. Thanks to Chase’s help, Dazzler emerged victorious.

O.Z. Chase was one of several people privy to a plan to ensure Dazzler’s safety by letting the world believe she had died of a gunshot wound. With the cover story securely in place, O.Z. bid Alison a heartfelt goodbye, uncertain he would ever see her again. They stayed in touch by writing each other letters. [Dazzler (1st series) #42]

They did cross paths again, though -- and not just through the mail. Not long after he parted ways with Dazzler, Chase took a job apprehending a Russian mutant named Vladimir Zaitsev who was wanted for trafficking drugs in Colombia. Chase ambushed Zaitsev in Florida but was no match for the mutant, who nearly killed him in retaliation. While unconscious, the police arrested Chase, believing him to be responsible for the string of murders Zaitsev had committed. Fortunately for Chase, Dazzler and her X-Men teammate Wolverine learned of his plight and traveled to Florida to break him out of jail. Together, the three of them -- four, including Cerberus -- pursued Zaitsev into the Florida Everglades. Although Zaitsev refused to accept defeat, he met his end when Cerberus mauled him to death, ending his murderous ways before he was able to strike an immunity deal with the U.S. government. Chase thanked Dazzler for her help, and the two of them parted ways once again. 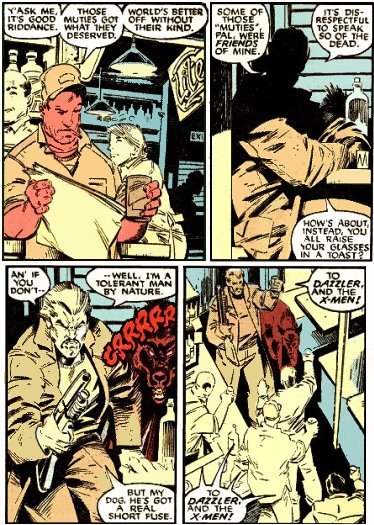 Shortly after that, Chase received the last letter he would ever get from Dazzler. She wrote him while living with the X-Men in San Francisco, just days before she and the rest of the team sacrificed their lives on national television to save the world. Chase tearfully read her final, heartfelt letter while drinking at a bar. When he heard some other patrons praising the death of the ‘muties,’ Chase chastised them and forced the entire bar -- at gunpoint -- to participate in a toast honoring the lives of Dazzler and the X-Men. [Uncanny X-Men (1st series) 228]