• Bio-incubator who
produces an infectious
disease on contact,
causing fever, delirium,
unconsciousness, and eventually
death if not treated

Nothing is known of the early life of the elderly woman known as Plague or the circumstances leading to her becoming one of the Morlocks, outcast mutants who found refuge in the tunnels beneath New York. When the X-Men’s Angel was kidnapped by the Morlock leader Callisto, who wanted the handsome X-Man to be her mate, Plague was among the Morlocks who confronted the outlaw heroes when they came searching for their teammate. She used her control over

disease neutralize Kitty Pryde by infecting her with a fever. Despite Plague doing the same to Storm shortly thereafter, the X-Men’s leader was able to muster enough energy to battle Callisto without her powers and take command of the Morlocks. She and Kitty recovered from Plague's attack. [Uncanny X-Men (1st series) #169-170]

When the Marauders launched an assault on the Morlock Tunnels in an attempt to wipe out the mutant community, Plague found herself targeted by both Sabretooth and Scalphunter. Unlike the vast majority of the rest of her Morlocks, Plague was able to defend herself and used her mastery of disease against Sabretooth, making him so gravely ill that he collapsed before he could strike her. Plague’s luck seemed about to run out against Scalphunter, who could strike at her from a distance, but to her surprise the mysterious Apocalypse appeared in the tunnel, knocking out Scalphunter and saving her. Despite not having a role in the Marauders’ actions, Apocalypse had 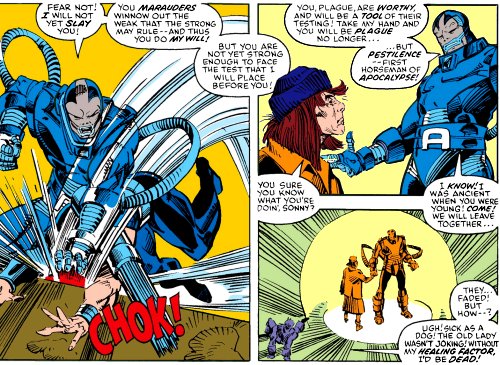 been watching with interest and approval, as the Marauders were winnowing out “the weak.” In Plague, Apocalypse decided he recognized one of “the strong” and deemed she was worthy of becoming the first of his Horsemen. Without much to think about, Plague accepted Apocalypse's offer and they vanished together. [X-Factor (1st series) #10]

On his commandeered Celestial ship, Apocalypse used alien technology to augment both Plague’s powers and her body, transforming her into his Horseman and renaming her “Pestilence.” Pestilence was only the first of Apocalypse’s Horsemen and she was soon joined by War and Famine. Together, they learned of Apocalypse’s goal of cleansing the genepool, which he believed had become polluted. They would winnow out the weak, so that the strong could survive. [X-Factor (1st series) #15] Soon after, the trio were introduced to the man who would become the fourth Horseman of Apocalypse – Warren Worthington III, formerly the X-Man known as Angel! [X-Factor (1st series) #17]

Of the first three Horsemen, Pestilence was the least impulsive. When tensions mounted between War and Famine, leading to blows, Pestilence was instructed by Apocalypse to sort the two of them out. She did so coldly by making her teammates ill. They were soon given their first orders by Apocalypse – to defeat X-Factor. Riding upon flying, robotic steeds, Pestilence made her debut

alongside War and Famine, confronting Iceman and the Beast. Cyclops and Jean Grey soon joined the battle, but even outnumbered Pestilence proved herself when she touched the Beast, making him gravely sick.

Pestilence’s callous attitude toward others was not limited to rebellious allies or enemy combatants. When Marvel Girl knocked her off her steed, Pestilence used the opportunity to touch nearby civilians as she ran through them, passing on infections to whoever happened to be in her way. Escape seemed impossible, however, as Pestilence and her two teammates were frozen by Iceman. It was only when Apocalypse teleported them back to his ship that they escaped capture. [X-Factor (1st series) #19]

Back on his ship, Apocalypse had completed Angel’s transformation into Death, his fourth Horseman, but neither Pestilence nor her fellow Horsemen were overly impressed. Wishing for the strongest of his Horsemen to lead, Apocalypse pitted Pestilence, War and Famine against Death in a duel for leadership. Unfortunately for her, Pestilence could not get close enough to Death to use her powers and quickly found herself pinned to a wall by Archangel's wing blades.  [X-Factor (1st series) #21-23]

With Death now ready, Apocalypse decided it was time for the final testing, for both his Horsemen and that of X-Factor. To this end, he teleported X-Factor to his ship and pitted them against each 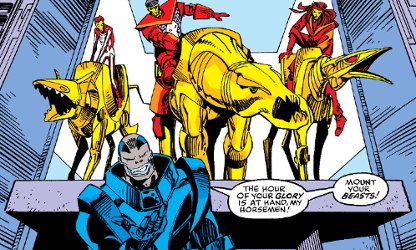 other. Pestilence once again went after the Beast, only to discover this time that her touch from their previous encounter had not only increased his strength, although at the cost of his intelligence. With the help of Death, the four Horsemen bested X-Factor and captured them. Now with nothing to stop them, Apocalypse unleashed his Horsemen upon Manhattan, determined to prove mutants' power against humanity. [X-Factor (1st series) #24]

In launching their assault on humanity in Manhattan, Pestilence passed through Hell's Kitchen, leaving chaos and disease in her wake. [Daredevil (1st series) #252] When she attacked an entire subway car full of commuters, Pestilence found surprising resistance in the form of the child heroes known as Power Pack, who had become aware of the Horsemen’s attack in New York and sought to help. The youngest of the group, Katie Power a.k.a. Starstreak, was in particular worried as their mother was supposed to be in the subway returning home and did her best to vex the far more powerful Horseman.

When Starstreak attempted to lead her out of the subway, Pestilence took the bait, demonstrating her malevolence as she attempted to infect the young girl. Indeed, Pestilence managed to touch the youth, who would have certainly died if the combined powers of Power Pack hadn’t managed to counter the infection. Pestilence then turned her attention to Cyclops and Marvel Girl, who were 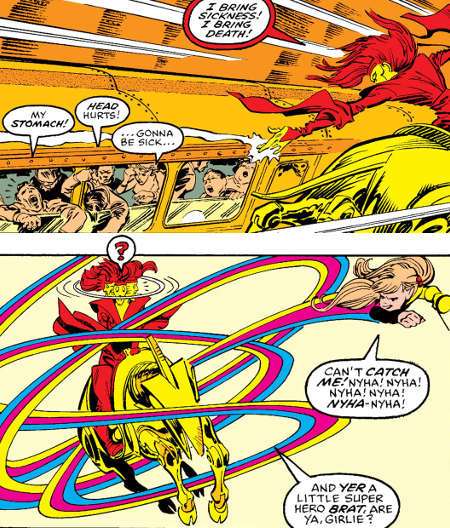 attempting to stop the dislodged antenna from the Empire State Building from falling to the street below. However, Pestilence again found her attack thwarted by Power Pack and this time was knocked off her mechanical steed. Young Starstreak did her best to save Pestilence from her freefall, but it was not to be. Pestilence’s fellow Horseman, Death, attacked at that moment, slicing the antenna in two, disrupting Starstreak’s rescue. Not only did Pestilence hit the pavement far below, but half of the antenna fell upon her. Whether it was the impact of the fall, or the tons of the antenna falling upon her, Pestilence was dead. [X-Factor (1st series) #25, Power Pack (1st series) #35] 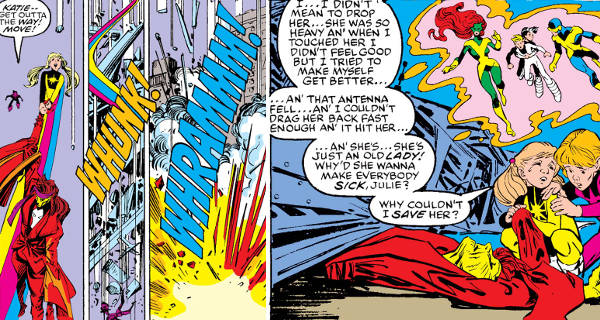 Ironically, Pestilence was mourned more by young Katie Power, who blamed herself for not being able to save her, than her master, Apocalypse. When X-Factor eventually confronted Apocalypse in his ship, the mastermind seemed not to care that his Horseman had been killed. She had been but a tool in his goal of testing the strong and winnowing the weak. In the years since Pestilence’s death, others have assumed her role, but none have had reason to remember the first who held the mantle. Whatever life the first Pestilence lived prior to her life as a Morlock or as a Horseman has been forgotten and remains lost to time.