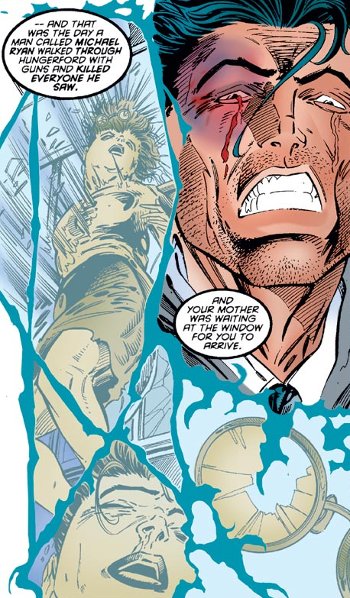 Peter Paul Winston Wisdom was born in London, England to Harold Wisdom and his wife, and is the younger brother of Romany. Little is known about Pete's childhood, besides the fact that he associated it with the smell of alcohol and his family could be considered... eccentric at best. What is known is that Pete's father was a detective sergeant and criminal profiler at New Scotland Yard before retiring, and his parents divorced at some point. For some reason, Wisdom has been paying his father's monthly rent for many years, probably ever since the old man retired. Why Pete is doing this secretly and how Harold Wisdom doesn't know is not certain.

A couple of days before Pete was supposed to go visit his mother in Hungerford, they had a huge argument over the phone, with her ultimately ranting about how she never loved his father and saw Peter as a mistake. As a result, he decided to forget the visit and didn't bother to call his mother back and tell her. In a horrible twist of fate, a spree killer named Michael Ryan came shooting through Hungerford and Pete’s mother was killed while waiting at the window for her son. Both Wisdom and his father blamed Pete for her death for years. [Excalibur (1st series) #90, Pryde & Wisdom #2-3] 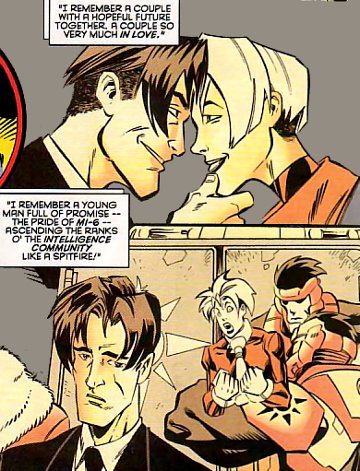 At an undisclosed point in his life, Wisdom joined MI-6 in British Intelligence and rose quickly in the ranks. At the time, he was romantically seeing a woman named Sari St. Hubbins, only to discover she was a contract killer. Wisdom had to choose duty over love when Sari attempted to assassinate Queen Elizabeth -- he captured her and turned her over to the government for imprisonment and psychiatric treatment. Though he received commendation from the queen herself, the consequences of his job began to weigh on his soul, and seemed to color his relationships with women from then on. [Excalibur (1st series) #114]

Wisdom would eventually begin working for Black Air, a clandestine agency for the British government, originally operating as an adjunct to the Ministry of Defence before replacing the Weird Happenings Organization. Despite his extremely unpleasant disposition and uncanny knack for pissing off anyone and everyone he met, Wisdom developed a loyal collection of friends and contacts due to his penchant for putting himself in harm's way for things that "needed doing." 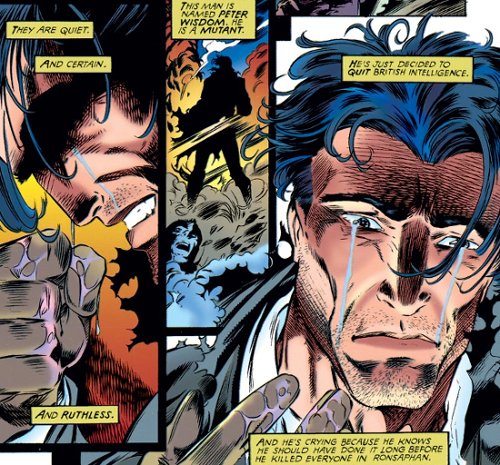 Once, he stole an agency helicopter to personally fly a comrade to the hospital, while another time he took three bullets saving the life of a total stranger, Amanda Jardine, whose father was in criminal intelligence. Devoted to his work at first, Wisdom eventually came to hate his job, as the destructive value of his mutant hot knives made him suited for mass murder and sanctioning assignments. After killing every single person in a Thailand terrorist cell at Ronsaphan, Pete vowed to retire from Black Air and British Intelligence.

By this point, Black Air had completely replaced W.H.O., and developed an interest in the civil war raging on the island nation of Genosha between Mutates and Magistrates. Some of the Genoshans reached out to the British government for aid, citing knowledge of a secret project developing anti-mutant ammunition which may have begun in England before coming to Genosha. 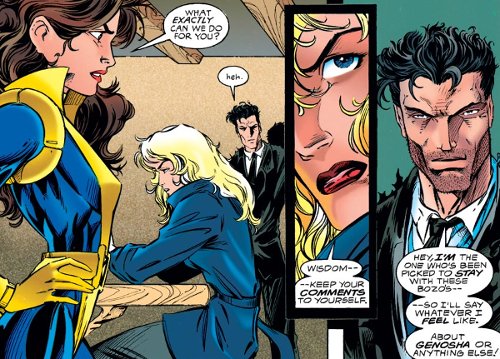 Black Air used W.H.O.'s old ties to the super-group Excalibur to ask them to look into the matter unofficially. Pete Wisdom was instructed by his superior, Michelle Scicluna, to accompany Excalibur to Genosha and lend his expertise and experience on the island to them. In exchange, Wisdom was promised the role would be as a non-combatant advisor, so he need never kill again, and he could retire from Black Air after the matter was concluded. [Excalibur (1st series) #86]

The "non-combatant" status didn't last long. Excalibur's Midnight Runner was shot down shortly after they entered Genoshan airspace and the group was caught up in the street fighting between Magistrates and Mutates. One of the Mutate street fighters mistook Wisdom for a "flatscan" and Pete was forced to use his power to defend himself, brutally maiming his attacker. Ultimately, Excalibur did not manage to uncover much more information about the mutant-killing bullets or the hidden mastermind behind Genosha's genegineering process of which they had uncovered hints, but that wasn't the point. It seemed Black Air only wanted them to "stir up the hornet's nest" by asking questions and poking their collective noses into clandestine business, in order to access whatever hidden information or technology started to scatter when the light was shined on them. [Excalibur (1st series) #87]

Pete Wisdom remained on Muir Island with Excalibur after Genosha, apparently waiting for his retirement from Black Air to be finalized. Most of Excalibur and the inhabitants of the research facility remained edgy around him, particularly Moira MacTaggert, who couldn’t stand his constant cloud of cigarette smoke. One morning, he got a message on his answering service from an old friend named Culley, who said he was in bad shape and needed special medical treatment "under the table." Bartering with Brian Braddock for transport to London, Pete was forced to take Kitty Pryde, Shadowcat, along with him as his pilot and chaperone. 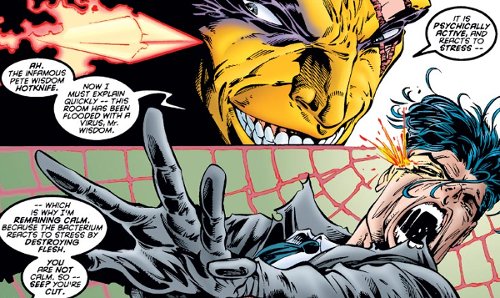 As with pretty much everyone who met him, Pete and Kitty got off on the wrong foot, and she didn't trust his or Black Air's intentions. Asking around the intelligence community, they discovered that Culley was dead and had until recently been working as security chief at a Black Air facility codenamed Dream Nails. After Black Air agents attempted to assassinate them, Pryde and Wisdom decided they were asking the right questions. Hooking up with Pete's old mate, Jardine, they determined that Dream Nails had something to do with extra-terrestrials, and Pete decided that exposing Black Air's business there was the only way to find out what really happened to Culley and avenge his death. Breaking into the facility, the pair uncovered information about an alien species calling itself the Uncreated, and how one of the creatures attacked Culley, exposing him to the xenobiological bacteria that eventually killed him. 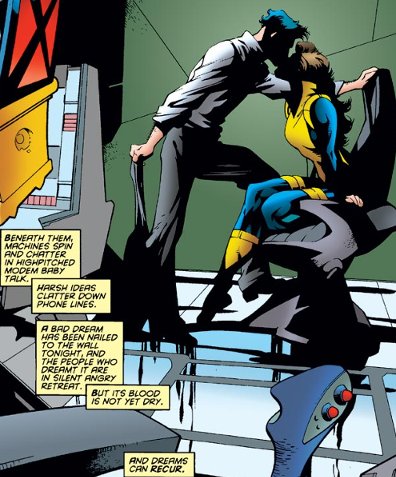 Before they could abscond with the intel, however, Black Air's agents got the drop on them and Wisdom was isolated with a psychic named Shrine to be tortured until the point of death. One weapon the agency had managed to cultivate from the Uncreated was a psychoactive virus called Blood Eagle, which reacted to intense emotions and stress by eating away at living tissue. The plan was for Shrine to telepathically root out the worst memories of Wisdom's life, making him susceptible to the virus until it ate away at him from the inside. Unfortunately for the executioner, Shrine was unable to cope with some of the sheer horrors Wisdom had perpetrated "in the national interest". His psychic exposure to Pete's memories ultimately led to the torturer himself being consumed by the virus' effects. Pete hooked up with Shadowcat before exiting the compound, and they arranged the destruction of the entire Dream Nails complex. [Excalibur (1st series) #88-90]

Over the course of this adventure, Wisdom had grown fond of Kitty, and she had seen the caring human being hidden under his "miserable toerag" exterior. On the way back to Muir Island, Shadowcat offered Peter a place in Excalibur now that he'd quit Black Air, and the two of them began a relationship. After a LOT of drinking, the rest of Excalibur accepted both turns of events. [Excalibur (1st series) #91] 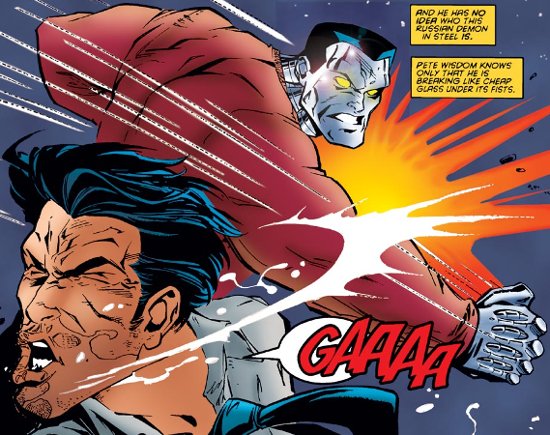 Coming back from the pub, though, Pete was confronted by Kitty's crazed ex-boyfriend, the recent Acolyte Colossus. To say the fight was one-sided would be under-selling it -- Wisdom managed to injure Colossus, but he himself suffered massive trauma to his head and chest, and needed a wheelchair to get around for the next few weeks. After spending some time calming down in a holding cell, Piotr was allowed to serve with Excalibur as his mental condition was monitored, something which didn't sit too well with Wisdom at first. It didn't help matters when Kitty's pet dragon, Lockheed, took an immediate dislike to Pete, and began stealing his clothes and cigarettes. The two of them began running around Muir like something out of a Looney Tunes short. [Excalibur (1st series) #92-93, 95]

Excalibur's next major case came when they uncovered a connection between Black Air and the London branch of the Hellfire Club. Their old friend, Alistaire Stuart of W.H.O., had stumbled upon Black Air's plans and asked Excalibur for asylum. In the meantime, their teammate Douglock was kidnapped off of Muir Island for sinister purposes. Provoked into a war, Nightcrawler had Wisdom lead the team to a Black Air acquisition station and obliterate it before moving on to London to rescue Douglock and bring down their twin opponent organizations. Some of the computer files Excalibur downloaded at the station contained information that conclusively linked Black Air and the Hellfire Club to acts of bribery in Parliament. Using his intelligence connections, Wisdom ensured that the documents would become public and the corrupt power structures would fall legally if Excalibur failed to disable their operations violently. Pete developed a particular interest in the situation when he learned an old rival of his, Scratch, was acting as the go-between for Black Air and the Hellfire Club. At the start of the battle, Pete spotted Scratch and went after him. With some unexpected help from Lockheed, he managed to defeat his nemesis, and Excalibur ultimately saved the day. [Excalibur (1st series) #96-100] 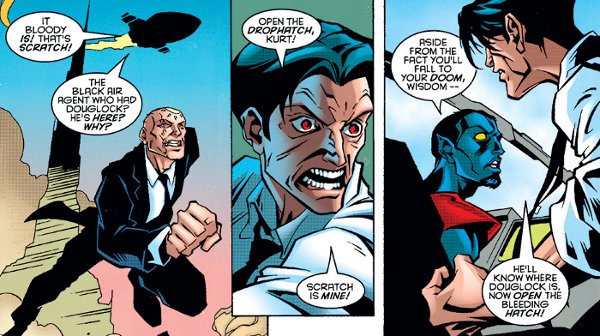 Their heroism in England occurred roughly simultaneous to the disastrous manifestation of Onslaught in New York -- while Great Britain was applauding the team’s actions, Pryde and Wisdom received a visit from U.S. government agents, who informed them that mutants like Excalibur were not welcome back in America. [Excalibur (1st series) #102]