• Geomorph able to
manipulate rock
and soil, allowing
her to levitate and
toss around chunks
of earth, cause lances
or streams of matter to
shoot out from the ground, reconfigure earth like clay into any shape she can imagine, and generate enough pressure to compress coal into diamond

Although of Danish descent, Petra was born a citizen of the Unites States of America. In fact, it was when her mother was pregnant with her that Petra’s parents and older brother immigrated from Denmark. Apparently she had a normal childhood – at least until a camping trip shortly after Petra’s thirteenth birthday. The entire family got caught in a rockslide and, while Petra escaped 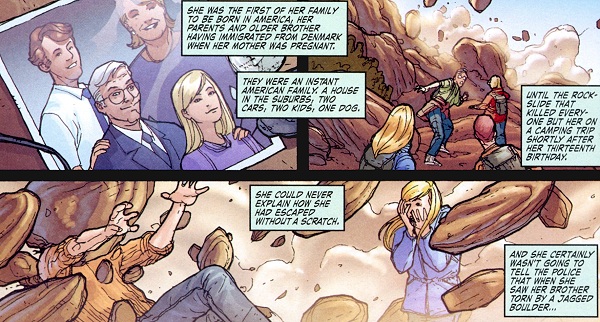 without a single scratch, her parents and her brother all died as they were crushed underneath debris. The incident left Petra shocked and confused, as for a moment it had seemed that the entire mountainside was under her command.

Petra was placed in foster care in New Jersey, but it proved to be anything but a nurturing home for Petra. The foster mother was an old and  bitter woman who smoked all the time and Petra had

to share a bedroom with five other kids. Even worse, the foster father took too much of an interest in the blonde teenager and tried to touch Petra inappropriately during a walk in Central Park. Before he could do so, the ground beneath him opened up and he sank into the ground up to his knees. As he called her a mutant, Petra ran off, never to return to her foster family again.

Instead she set up camp in a cave within a rock formation of Central Park, using her geo-morphing powers to seal off the cave access so that nobody would intrude. For the next two years, she lived off the streets, begging for money or scrounging in dumpsters. Petra mostly kept to herself during this time, as she feared other people’s reactions if they were ever to learn of her being a mutant. She also blamed herself for her family’s death, both wishing that she had mastered her abilities sooner to have been able to save them and fearing she accidentally might have caused the landslide in the first place.

When she was sixteen, Petra discovered that she could use her abilities to transform coal into diamond, which made her life a lot easier. She tried not to draw too much attention when selling her self-made diamonds, but one of the clerks became suspicious and called the police, probably 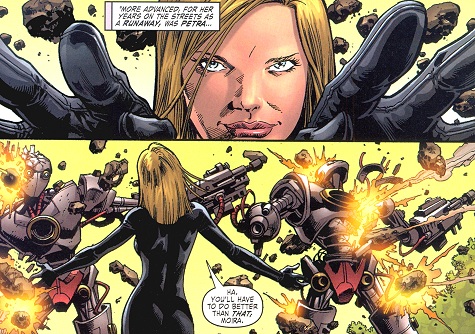 thinking that Petra had stolen the gem stones.  The teenage mutant was subdued by the local authorities after a brief battle and awoke in what seemed to be a prison. [X-Men Deadly Genesis #1] Yet, she was released into the care of world renown geneticist Moira MacTaggert, who helped Petra further hone her skills at her Muir Island Research Center. [X-Men Deadly Genesis #4]

Petra was soon joined by other teenage mutants in training. Before long, Moira’s long-time friend, Professor Charles Xavier, arrived with dire news. His own class of mutant teenagers, the X-Men, who had been fighting crime and evil mutants for over a year, had been captured by their latest enemy, the mutated island Krakoa. Xavier needed Moira’s students for a rescue mission and she reluctantly agreed after the professor explained that he could telepathically bestow Petra and her friends with the knowledge of several months of training exercises. Unfortunately, the four newly drafted X-Men were still not prepared to face a foe like Krakoa, who slowly drained them of their energies the longer they stayed on the island. Petra specifically had a hard time, as she found parts of the semi-sentient island’s landmass beyond her control. 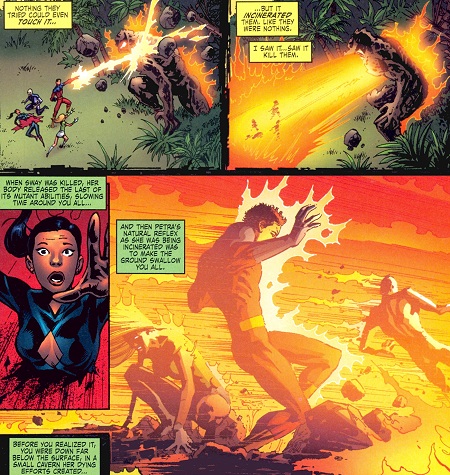 The four mutants managed to free Cyclops, enabling him to escape the island and eventually return with a second rescue team. However, when Petra and the others tried to rescue the remaining X-Men, Krakoa attacked them with a creature that spew fire and lava on them. Upon being incinerated, Petra made the ground swallow herself and her friends. Her last act before succumbing to her injuries was to create a small underground cavern, enabling two of her friends to survive – even though it would be years before they were found. [X-Men Deadly Genesis #6]

In at least one alternate reality, the entire second X-Men team survived the battle with Krakoa, though the original ones did not. Gathered around their leader, Vulcan, the four X-Men grew up to be some of the most popular heroes of their world. However, years later, it was discovered that the overzealous Vulcan had accidentally killed Jean Grey when he attacked Krakoa while it was

feeding on her and he had then murdered the remaining X-Men as they had witnessed the incident. Petra was furious to have had such a psychopath for a friend and teammate and, together with Xavier and the other X-Men, she saw to it that Vulcan was punished for his actions and securely locked away.