• Command of
electromagnetic
harmonics allows her to
sense electrical and mechanical
activity, as well as energetic power
signatures, passively disrupt these
harmonics to mask herself and others from organic senses or electronic security, and actively disrupt harmonics to shut down or scramble mechanical systems, cause paranormal abilities to fail or run amok, and induce pain, paralysis or neural spasms by interfering with bio-electric feedback harmonics
• Capable of flight and seemingly able to become insubstantial, possibly through personal transformation into an energetic form

Almost nothing is known about the early life of Eileen Harsaw, the mutant woman who would take the name of Phanstazia. Though possibly coming from educated background in which she might have even earned a PhD, Eileen nonetheless chose to enter the complicated world of mutant activism as a member of the Toad's Brotherhood of Evil Mutants, alongside Pyro, Blob and Sauron. Nothing is known of the circumstances which led her to meet with this group or ally herself with them. 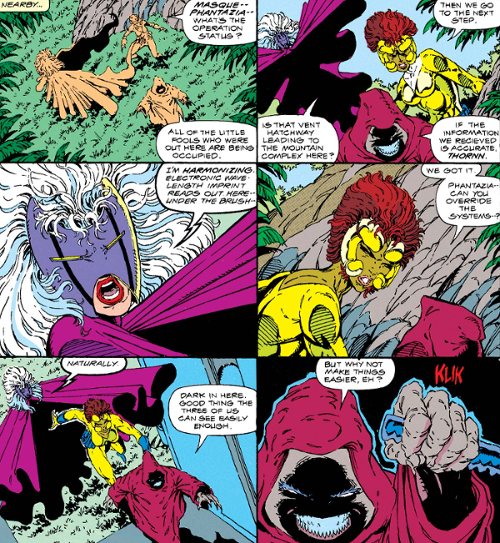 As this new Brotherhood was just beginning, Toad was looking for new allies. Phantazia was present when the Toad made a deal with Masque to ally his team with the remaining Morlocks to take out the recently formed X-Force. Joined with Masque and Thornn of the Morlocks, the Brotherhood arrived at X-Force's Adirondack Mountain base, where Phantazia used her ability to disrupt electronics to override the security and gain entry.

Inside, they Brotherhood found themselves in a hangar bay, where Phantazia was impressed by the technology that Cable had amassed. Before they could speculate on where Cable had obtained his tech, the intruders were confronted by Cable and his X-Force. During the battle that followed, Phantazia found herself up against both Cable and Cannonball. Here, Phantazia’s status as a newcomer worked to her advantage, as Cable had no idea who Phantazia was and soon learned that his weapons had no effect on her. Worse, her powers worked on his weapons and she quickly disrupted them. Cannonball too seemed helpless against Phantazia. When Cable ordered Cannonball to attack, the youth attempted to expand his blast field inside her, but Phantazia’s powers once again worked unexpectedly, disrupting Cannonball's bio-electric field and taking him out.

Though Phantazia had proved to be a powerful foe, X-Force ultimately bested the Brotherhood, who fled after the battle resulted in the apparent deaths of Masque and Cannonball, and the capture of Thornn. [X-Force (1st series) #6-7,9]

When the US government declined to grant political asylum to the Genoshan refugees known as the X-Patriots, Toad saw potential recruits for his Brotherhood. When the government-sponsored X-Factor moved to intervene, Phantazia quickly shut down their speedster, shorting out Quicksilver’s powers with her own. However, the tables turned for Phantazia when she found herself felled first by one of Havok’s plasma blasts and then later by Polaris. In the end, none of the Brotherhood were left standing and X-Factor dealt with the crisis of the X-Patriot refugees on their own. [X-Factor (1st series) #82]

Despite their defeat, the Brotherhood seemed to have evaded arrest and escaped to plot their next caper. 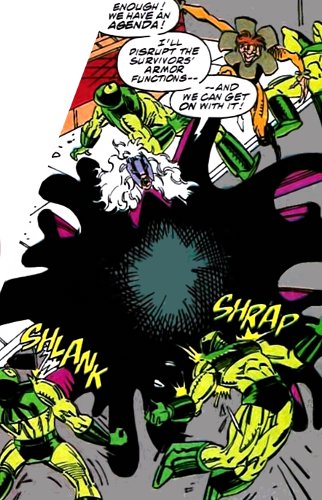 Toad soon believed he had found the answer to the bumbling Brotherhood's problems when he learned of a villain named Portal, whose armor had been captured by Crestmore Research. Intending to steal the armor for themselves, Toad planned to use it to open portals to their enemies’ homes and destroy them in surprise attacks. Possibly by happenstance, the Brotherhood arrived at Crestmore Research just as Portal was attempting to recover his lost armor and was about to be overwhelmed by the lab’s armored Guardsmen. While the more violent members of the Brotherhood dealt lethal blows to some of the Guardsmen, Phantazia merely disrupted the armor functions of the other Guardsmen, rendering them inert.

Unfortunately for the Brotherhood, the mission went sideways with the arrival first of Darkhawk and then Spider-Man. Phantazia herself was taken out by Darkhawk and would have been captured if not for the quick thinking of the Blob, who commandeered a getaway car for the whole team. Even though they had learned that Portal’s abilities were not from his armor but due to him being a mutant like them, the Brotherhood counted their losses and decided against recruiting him into the Brotherhood. [Darkhawk #19-20, Sleepwalker #17] 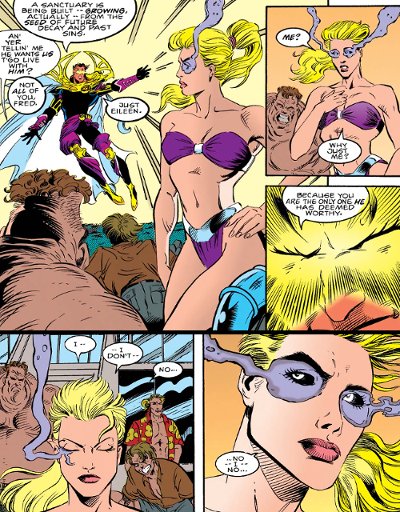 Despite the dysfunction of the Brotherhood from both within and without, Phantazia remained a steadfast member. She also kept to herself and tended to stay out of the arguments between her male teammates, ignoring them while she read books on scientific subjects, such as astrophysics. One such argument occurred while they Brotherhood waited on a yacht anchored off Key West, waiting to meet someone who had requested a rendezvous. The individual turned out to be Exodus, a herald of Magneto who had created an orbital sanctuary called Avalon and were now inviting mutants to join them. To the Brotherhood’s surprise, though, Exodus only invited Phantazia, as she was the only member of the team Magneto had deemed worthy. As her teammates groused at the slight, Phantazia was put on the spot and had to give her answer immediately. As her teammates glared at her from behind, Phantazia considered for a moment but ultimately responded by telling Exodus no. After Exodus’ departure, Phantazia’s teammates raged at their non-invitation, leaving Phantazia to seemingly wonder if she had made the right choice. [X-Men Unlimited (1st series) #2]

When it became clear that to the Brotherhood that Pyro was suffering from Legacy virus, Phantazia accompanied her teammates to an island haven for mutants set up by the enigmatic Jonathan Chambers. When they encountered Pyro's longtime teammate and friend, Avalanche, Phantazia expressed hope that Avalanche could help Pyro's emotional state. 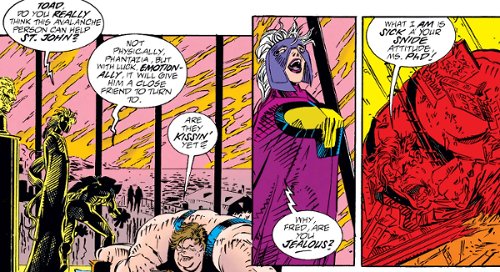 What was intended to be a peaceful visit to Haven turned violent when the X-Men arrived to the island to investigate Chambers’ claims of treating afflicted mutants. Assuming the worst, the X-Men and Brotherhood immediately clashed and Phantazia soon found herself on the wrong side of Psylocke’s psychic knife. In the end, the X-Men became convinced of Jonathan Chambers’ sincerity in helping those afflicted with the Legacy virus and left him (and the Brotherhood) in peace. [X-Men Annual (2nd series) #2]

During his efforts to find a cure for the Legacy Virus, Hank McCoy challenged himself to think far, far outside the box and constructed a Time Glider to theoretically travel into the past and stem the spread of the virus. Empyrean wanting to use it to the time glider to seed the timeline with samples of the virus in various eras so he could feed off infected mutants convinced the Brotherhood to steal the Time Glider and bring it back to his isle. The X-Men stormed the isle but the Brotherhood were waiting, with Phantazia taking on Storm. The pair fought and eventually storm gained the upper hand , knocking Phantazia to the ground. However as Storm turned away to continue her mission, Phantazia got back up and stating that the Brotherhood would destroy the X-Men, struck storm from behind knocking her unconcious. As Phantaizia stood over her body she questioned whether in fact the Legacy virus would be ultimately responsible for destroying them all and was helping Empyrean the right thing to do. Ultimately Empyrean's plan failed and he was trapped in the Mesozoic Era, unable to return to the present. [X-Men: Time Gliders #1-4]

The Toad's Brotherhood disbanded a short time later and Phantazia's involvement in mutant affairs ended as quickly and as mysteriously as it had begun. Given her seeming level of education, it’s possible she returned to private sector employment, using whatever skills she might have earned in acquiring her possible PhD. It is also possible that her refusal to accept Exodus' invitation to join Magneto or her visit to Chambers’ Haven had a deeper impact on her than expected.

Years later, when reality was warped into the House of M, Phantazia was thrust into this new world as a member of Magneto's royal guard. In this role, she sensed an impending Sentinel attack on the royal house. [House of M (1st series) #6-7] For reasons unknown, Phantazia was one of the few participants in House of M to retain their memories. She emerged from the House of M in a hysterical state, babbling “House of M” over and over. It was in this condition that she was taken into the custody of SHIELD, where Director Maria Hill attempted to determine to what this “House of M” was referring. Since Phantazia had also been rendered powerless during the Decimation that followed the House of M event, it was not clear as to whether SHIELD or Director Hill were aware that Eileen Harsaw had been the mutant terrorist known as Phantazia at all. [New Avengers (1st series) #16]

The current whereabouts of Eileen Harsaw, the woman formerly known as the mutant Phantazia, are unknown. Depending on her mental state or whether they had determined her connection to the Brotherhood, she could either remain in SHIELD custody, or have been released.