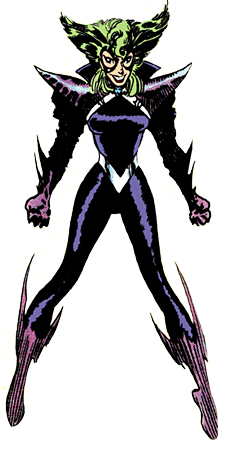 1) After Lorna’s latent magnetic powers were brought forth by a mutant energy stimulator, Mesmero gave her a costume that contained elements inspired by both Magneto’s helmet and classic Greek designs. It consisted of a tiara to keep back her hair, a bikini-style top, tight metallic pants, Greco-Roman styled shoes and a cape that emphasized her bare shoulders, all of that in different shades of green. [X-Men (1st series) #50]

2) When Shi’Ar agent Eric the Red brainwashed Lorna into serving him, he gave her the codename Polaris and a new costume that in many ways was typical of Shi’ar fashion. It consisted of a predominantly violet skin-tight suit with black tight opera gloves and thigh-high, high-heeled boots and a high black collar while rather low-cut in front. In typical Shi’ar style, the costume also incorporated several web-like patterns. Unlike her previous costume, it was also insulated. [X-Men (1st series) #97]

-) During the few incidents that Polaris helped out as a reserve X-Man, she was alternating between her two previous costumes.

3) Right after the psychic entity, Malice, assumed control over Lorna’s body, she used her magnetic powers to create herself a new costume and a hairstyle to match it. It was a black skin-tight suit with sharply cut purple boots, shoulder pads and gloves, as well as an eye mask. Her new punkish hairstyle actually matched the repeated “v”-pattern of her suit. [Uncanny X-Men (1st Series) #219]

4) After Polaris’ magnetic powers were stolen, and Malice was purged from her, Lorna developed new strange powers. She grew in size and possessed increased strength and stamina. When she had herself examined on Muir Island, Lorna received a modified, standard X-uniform. [Uncanny X-Men (1st Series) #254] 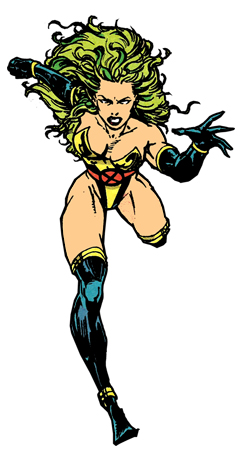 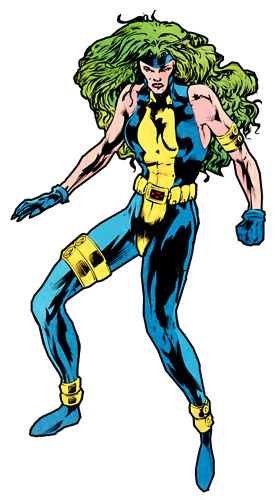 5) Like the other residents of the island, Lorna fell prey to the Shadow King and, under his influence, she began to wear a “bathing suit” version of the standard X-uniform. [Uncanny X-Men Annual #15]

6) Following an invitation from Val Cooper, Lorna joined the governmentally sanctioned X-Factor. Although the team look was optional, Lorna agreed to the new uniform in the basic dark-blue and gold look. Lorna’s outfit was a practical blue bodysuit with a golden upper part (displaying a prominent X-symbol), a fine golden glove and short boots in the same color. [X-Factor (1st series) #71]

7) Reasserting her self-confience, Lorna took to wearing this revealing costume that she had designed: A sexy metallic-golden bathing suit-style outfit with a red collar and X-pattern that emphasized her bosom. In addition, she wore thigh-high red boots and opera gloves, as well as buckles on her right arm and boot. The latter was connected to a metallic belt (garter-style), which she could transform with her magnetic powers. [X-Factor (1st series) #87]

8) Declaring the red and gold outfit too provocative and subversive, the government asked Polaris to stop wearing it. Instead, they gave her a new outfit that was a mix between the team look and her own creation. [X-Factor (1st series) #93] 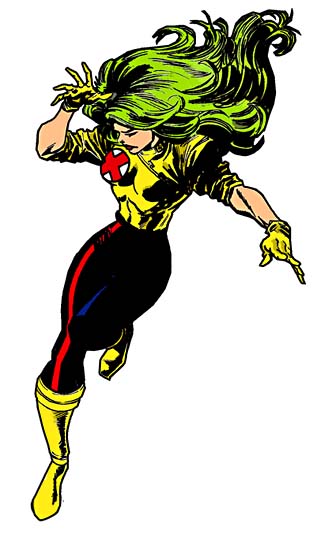 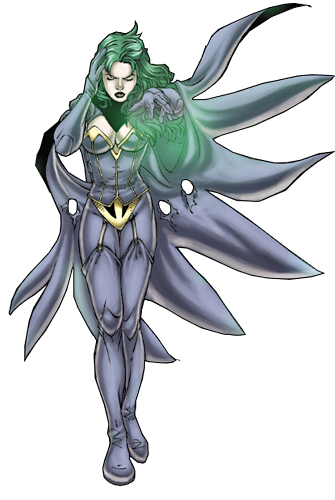 9) Later, Lorna started to wear a more individual costume. It was similar to her first X-Factor outfit, but this time with an orange jacket instead of a golden top and the X-symbol on the other side. [X-Factor (1st series) #114]

10) Polaris hardened her personality after some relationship problems, which reflected in her new look. She cut her hair and wore a new suit with armor elements. At the same time, she returned to the familiar blue and gold color scheme. [X-Factor (1st series) #114]

-) During the gathering of the Twelve, Lorna appeared in a simulacrum of her fourth X-Factor uniform, though the top was now pale green instead of orange. [Uncanny X-Men (1st series) #377]

-) After the crisis, Polaris accepted Magneto’s offer to accompany him to Genosha. While she never officially joined his Acolytes, she was seen wearing two different Acolyte styled uniforms. [Uncanny X-Men #379-380, X-Men (2nd series) #99]

11) On the island nation, Polaris explored her magnetic powers under Magneto’s tutelage for months, in return providing him with a link to Earth’s magnetic field. Lorna wore a new entirely green costume with black ornamentals, and a metallic tiara. [Magneto Dark Seduction #1]

12) Back with the X-Men, Lorna began wearing a dark, sexy new outfit, which consisted of purplish-black pants over which she wore thigh high-boots of the same color garter-style combined with a low-cut bodice with some golden stripes emphasizing her breasts. The costume was completed by a short batwing like cape and a black halo, which she soon dropped, however. [Uncanny X-Men (1st series) #418] 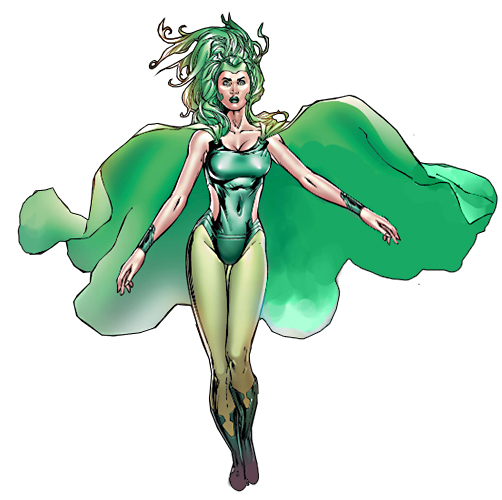 13) As Apocalypse’s Horseman Pestilence, Lorna wore a spikey battle armor that covered her from head to toe, leaving no single clue to her true identity nor the gender of its wearer. [X-Men (2nd series) #182]

14) Upon accompanying the X-Men into Shi’Ar space, Lorna adopted a new uniform that was somewhat reminiscent of the first costume she ever wore. In fact, one might even want to call it a simplified version of that entirely green costume. It consisted of a tiara to keep back her hair, metallic boots and wrist bands and a bathing suit on top of some pants in a lighter shade than the rest of the costume. [Uncanny X-Men (1st Series) #476] Occassionally she would make minor alternations to this costume, such as crafting an X symbol around her stomach or adding shoulders pads. [X-Men: Kingbreaker #1-4 and X-Men: Emperior Vulcan #1-5] 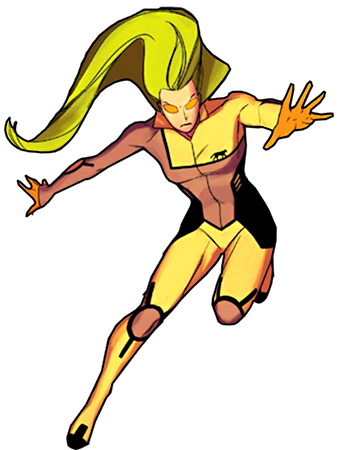 15) Polaris decided to change her outfit to be more in line with rest of X-Factor. While she retained her signature tiara, she dropped the green-only look and implemented a three tone costume trenchcoat look of purple, black and lime green. The purple was the primary colour, with the black accenting the arms of the jacket. She wore lime green gloves and purple boots and a metalic belt with an X symbol in purple. The lime green colour ran down the center of her body just below her cleavage to just above her knees. [X-Factor (1st Series) #245]

16) Polaris's Serval uniform consisted of three colours black, gold and tan. The collared bodysuit resembled something akin to an olympic athlete sponsored outfit as it contains Serval's logo just above her right breast. The colours divided Lorna's body in geometric shapes such as rectangles and circles. [All New X-Factor #1]